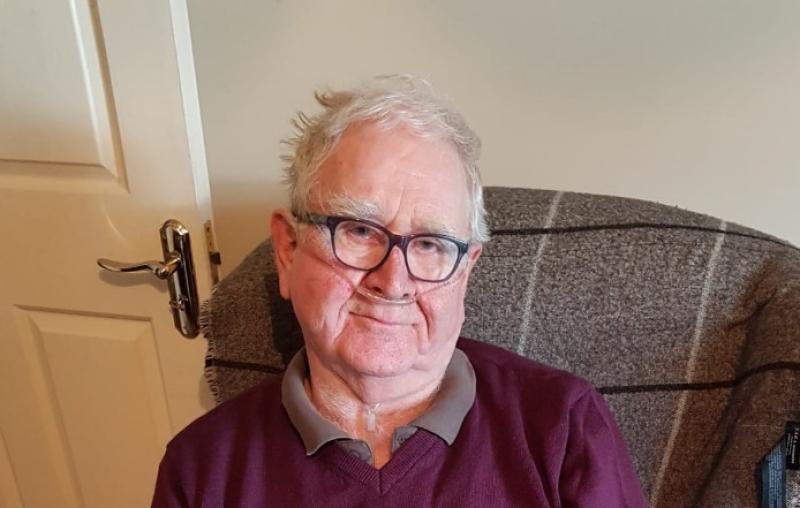 Jim Cradock from the Dunningstown Road, Kilkenny, who has benefited from COPD programmes

Jim Cradock, a hugely popular Galway man living in Kilkenny for 45 years, is a former brewery manager with Smithwick’s.
For over four decades he had been having problems with his chest, with infections and so on.
In the mid 1990s he was diagnosed with bronchiectasis (where the airways of the lungs become abnormally widened, leading to a build-up of excess mucus) and emphysema, a form of COPD (Chronic Obstructive Pulmonary Disease).
In a major operation in 2004, he had a lobe removed to lessen the impact of the bronchiectasis.
While it did help, he would continue to have chest infections from time to time. He was also put on oxygen 24/7 about six years ago, a development which, he says, “was a bit of a shock”.
Jim who will be 75 years old this December, commenced a pulmonary rehabilitation exercise programme in Waterford and subsequently started a weekly exercise programme organised by the Kilkenny COPD Support Group.
He says it has been; “hugely beneficial” and “better than any medication”.
Not only is it beneficial physically, but also emotionally and psychologically.
In fact, it’s thanks to the exercise programmes Jim has undertaken that he has been able to take out his golf clubs again.
While Jim had to stop driving, he hasn’t let that stop him from getting away.
Two years ago, he spent two weeks on holidays in Spain, which despite its challenges in getting clearance for oxygen through Dublin Airport, was worth it.
He also has great friends, who take him out for a drink from time to time.
Jim is married to Mary Cradock, who has been closely associated with the Watergate theatre since it opened 25 years ago. She is his devoted carer. They have two sons and a daughter and are proud grandparents of seven grandchildren.
Today (Wednesday) is World COPD Day. COPD Support Ireland, the umbrella body for 20 local COPD support groups, has announced a new community-based exercise programme for people with COPD in Kilkenny.
Perhaps more commonly known as bronchitis or emphysema, COPD is a chronic lung condition whose primary symptoms are breathlessness, persistent cough and regular chest infections.
Support
The 12-week programme is designed to support self-care, reduce flare-ups and hospitalisations in people with COPD, with a particular focus on issues such as smoking cessation, nutrition and inhaler advice.
Exercise is a key aspect of treatment for patients with obvious physical health benefits such as increased muscle strength, agility, flexibility and aerobic endurance, in addition to the social and mental health benefits.
The programme also helps to slow progression of the disease which will, in turn, lead to fewer GP and hospital visits.
Prof J.J. Gilmartin, Consultant Respiratory Physician and Chair, COPD Support Ireland, announced that thanks to extra funding from the National Lottery Grant Scheme the group are able to offer this much-needed community-based exercise programme in Kilkenny.
“With greater awareness of signs and symptoms and increased support in the community through access to tailored exercise, good information and peer support, we can do a lot to improve the quality of life of those living with COPD,” he said.
It’s estimated that there are almost half a million people in Ireland with COPD. Many do not know that they have it.
There were 750 hospital admissions between 2015 and 2017 for people with COPD in Kilkenny and it is the most common cause of disease-specific emergency admission to hospital among adults in Ireland.
COPD is caused primarily by smoking, but can also be the result of inhalation of dust or chemicals, or exposure to indoor or outdoor pollution, including fumes in the workplace over an extended period of time.
Some people with an existing illness such as chronic asthma may be more prone to developing COPD, while others may be pre-disposed to it due to a hereditary lung condition known as Alpha-1 antitrypsin deficiency.
People over the age of 35, who are or have been smokers, who have symptoms or who have a family history of the disease, should ask their GP for a COPD health check. This is done through a very simple spirometry breathing test, which measures the amount of air and how fast a person can blow it out, following the taking of a deep breath.
A new booklet, COPD & Me, and public information packs, incorporating posters and leaflets, will also be available direct from COPD Support Ireland. For more information on COPD, email info@copd.ie or telephone 086-0415128.