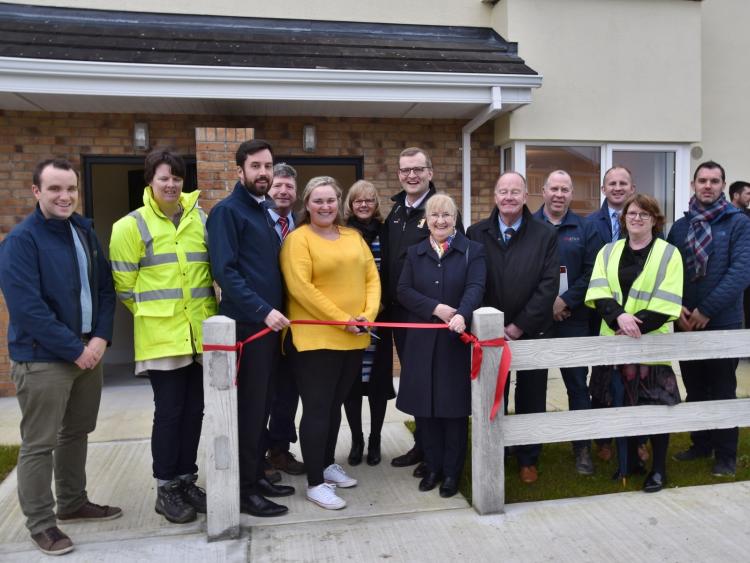 Tenant Helene Power cuts the ribbon on the new development at Togher Way in Urlingford, with local councillors, council staff and management, and representatives from McStan Construction

It was smiles all round as new tenant Helene Power cut the ribbon on the 18 new houses at Togher Way, Urlingford on Friday.

Chairman of the Castlecomer Municipal District Michael McCarthy welcomed Minister for Housing Eoghan Murphy and guests to the area for the official opening. Cllr McCarthy thanked the staff of the council’s housing section, in particular, director of services Mary Mulholland and senior executive officer Martin Mullally.

“In the spring of 2016 you accompanied me on a visit to a number of places in North Kilkenny one being Togher Way, where the original developer facilitated our entry on to that site,” he said.

“Your comment that day was that this was as bad a derelict site as you had seen. Fast forward to 2017 and the first two phases of 16 homes are delivered, and now this further 18 have been allocated — in all 28 three-bedroom and six two-bedroom.

“John Staunton and his team at McStan construction are to be congratulated on their delivery of such high quality homes and on time.”

At Monday’s council meeting, Cllr Mary Hilda Cavanagh also welcomed the news. She said the area had been an eyesore for many years, and the houses were a credit to all involved with their delivery.

The final phase of the development will be a further ten houses ,which are due to commence in the coming months. This will bring the total to 44 homes delivered.