Heated argument: "Show some respect for the office you hold", mayor told 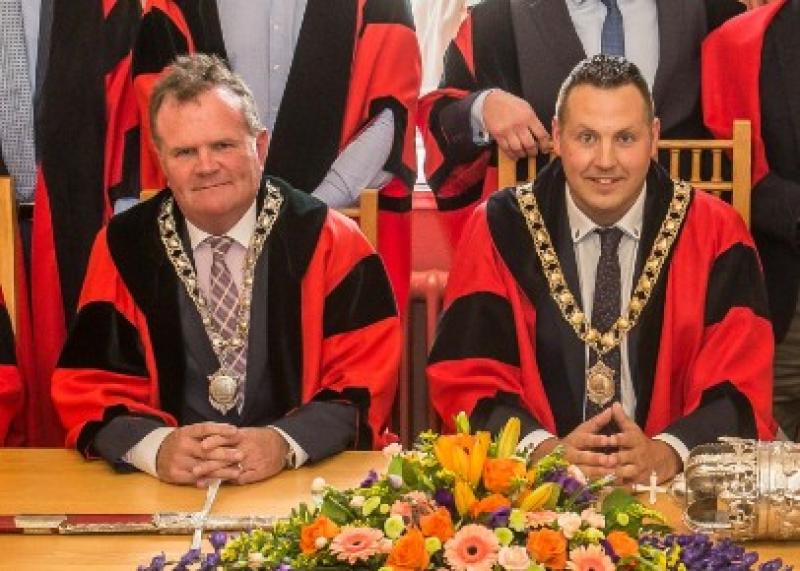 Mayor of Kilkenny Peter Chap Cleere with Deputy Mayor Joe Malone. The pair had a disagreement on Friday

Two former Kilkenny mayors walked out of the council chamber amid a heated argument with the current mayor at the end Friday’s meeting of Kilkenny City Municipal District.

Cllrs David Fitzgerald and Joe Malone, who is the deputy mayor, took issue with Mayor Peter 'Chap' Cleere when he told them that a Notice of Motion brought by Cllr Malone would have to wait until the next meeting to be heard, as the meeting was concluded. Cllr Malone’s Notice of Motion was calling on the members to agree to have a ‘voluntary poster free election’ in the city and environs for the upcoming May 2019 Local Elections.

Friday’s meeting was due to close at 4.30pm, and as that time approached the members had asked a number of questions of senior engineer Simon Walton. Noting there was only two minutes left, Mayor Cleere said Standing Orders allowed for the meeting to be extended, but only for the item currently being discussed.

He asked if the members would be happy with written responses from Mr Walton later on, to allow the Notice of Motion to be heard, or if they would prefer to have the answers there and then. The members asked for the answers now, and Mr Walton obliged, with the discussion lasting about five minutes.

Moving to close the meeting, Mayor Cleere said the Notice of Motion was thus deferred until the March meeting. Cllr Malone, who is also the mayor’s Fianna Fail party colleague, said this wasn’t fair. He received support from Cllr David Fitzgerald, who noted the launch of the St Patrick’s Festival was not until 5pm, and there would be time to have both Mr Walton’s answers and the Notice of Motion.

In a heated back-and-forth between the three councillors, Cllr Fitzgerald said Mayor Cleere had “made a joke of Standing Orders” and asked him to “show some respect for the office you hold”. He stood up and withdrew from the council chamber.
Cllr Joe Malone, who was also standing at this juncture and preparing to leave, said that as a former mayor, he found the events ‘very disrespectful’.

“You don’t need posters — you’re going to get elected anyway,” he told the mayor as he departed.

Following the two councillors’ departure, Mayor Cleere thanked the four remaining councillors, who were still seated, for their patience "notwithstanding all the grandstanding". He said “the lack of numbers in the chamber” to hear items should be pointed out.

Cllr Sean Tyrrell told the mayor that he found him to be “very fair and be a very good chairman”.