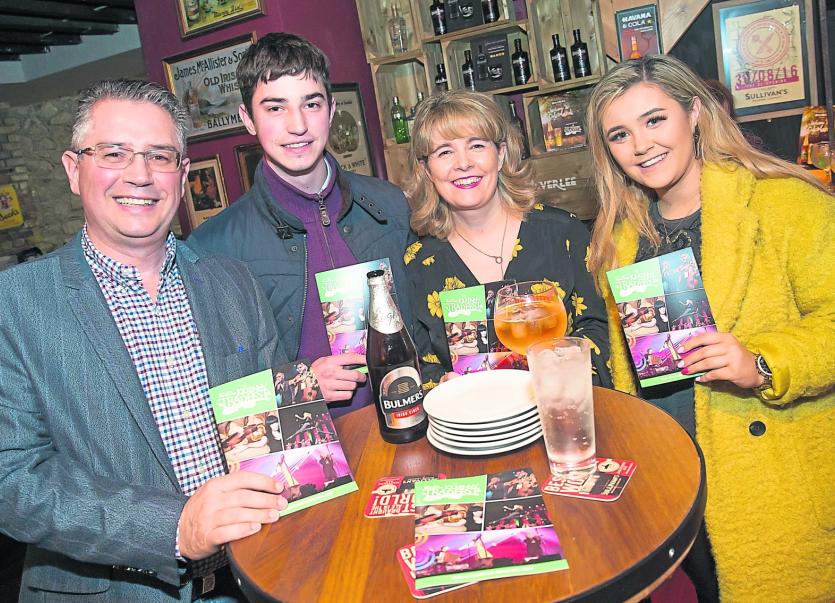 Kilkenny is inhabited by some of the world’s best traditional Irish musicians and supporters. And, this week, these will be joined by many more for the annual Tradfest as part of the county’s celebrations surround St Patrick’s Day with a range of sessions, gigs and workshops.

Between this and other musical offerings, the biggest issue you’ll have is how to fit it all in. On Wednesday Kilkenny Music Festival’s gala concert takes place at the Watergate Theatre from 7.30pm. This is the highlight of the annual event which ran last week and will see plenty of talent take to the stage across the evening.

Across the road at John Cleere Bar and Theatre from 8pm there’s a book launch with a difference. Anne K Distel’s collection of original Irish tunes and ink drawings will be unveiled, accompanied by the playing of some of the music.

Thursday sees the Kilford Arms Hotel host a cabaret in aid of John Needs Pembro. It features John Travers and friends from 8.30pm with finger food to enjoy, a raffle to win and spot prize to secure for the best St Patrick’s Day Hat.

While this week’s Sofa Sessions features Jimmy Smyth’s Organised at Billy Byrne’s Bar from 9pm. Tradfest kicks in fully on Friday with acts including Altan at St Canice’s Cathedral while at the same time Orla Fallon plays Anocht Restaurant. The Kilfenora Céilí Band are at the Watergate Theatre and Yvonne Casey and band take over Paris Texas from 10pm.

Elsewhere, Moira’s Open Mic Night is back at the Home Rule Club from 9pm and Wildfire lead the fun at Matt the Miller’s following its nightly trad session with DJ Eoin B keeping the party going.

Saturday’s Tradfest headliners include KGB and CBS Kilkenny in a fundraising concert for the school at St Canice’s Cathedral from 7pm, Cry Monster Cry are at John Cleere’s Bar and Theatre from 9pm and Téada with Séamus Begley perform at Set Theatre at Langton’s from 10pm.

Also on the night there’s a Motor Neurone Disease Benefit in O’ Hara’ s Pub in Thomastown from 9pm. There, music’s by Pat Treacy and there are prizes to be won.

At the same time Declan Nerney brings the music for the dancing at the Rhu Glenn Hotel in Slieverue. The Buddies play the bar at the Home Rule club.

Monday’s a Bank Holiday, so for many the fun continues across the day. There’s plenty of music to enjoy, including Caladh Nua at Paris Texas from 4.30pm.