Champions: Kilkenny College come out on top in war of words

The school's senior debating team has won the 2019 All-Ireland final of the Gael Linn debating competition, Comórtas an Phiarsaigh 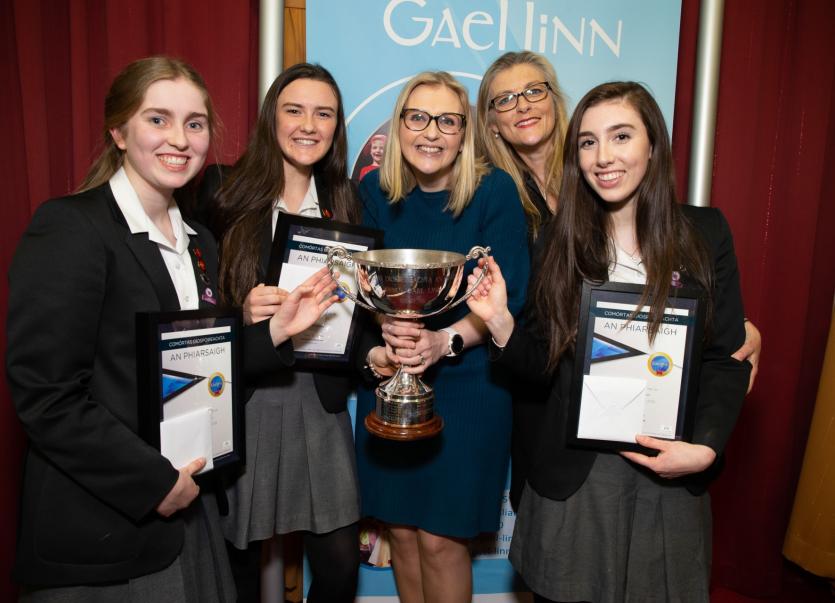 Kilkenny College’s senior debating team has won the war of words at the 2019 All-Ireland final of the Gael Linn debating competition, Comórtas an Phiarsaigh.

The event took place in the Lucan Spa Hotel, and was the culmination of this year’s competition, organised annually by Gael Linn, and funded by Foras na Gaeilge, for second-level schools nationwide, in which over 150 schools have taken part since October last.

The high standard of debating on the night posed a considerable challenge to the five adjudicators, Seán Mac Labhraí, Máirín Uí Mhuirí, Áine Máire Ní Ghioballáin, Fergus Ó Conghaile and Antóin Delap, in their task of selecting the winners.
The motion up for debate was particularly appropriate for the age group — ‘Ba cheart an aois vótála in Éirinn a ísliú ó 18 go 16 (The voting age in Ireland should be reduced from 18 to 16).

Passionate speeches were made by the young orators, with plenty of point-scoring and rebuttal from both side. In the end, the winning words of the Kilkenny College team, Molly , Iseult and Rachel, ensured their victory. It’s the first time a team from the local school has gone all the way to the top, and there was great jubilation among the supporters when the Kilkenny girls lifted the Gael Linn cup.

Regina Ní Riain is the teacher who guided the pupils on the journey to their All-Ireland title, and she was justifiably delighted and proud of her team’s success.

Earlier on in the evening, Athlone Community College won the junior section of the competition against strong opposition.

Guest chairperson on the night, Peter Kavanagh, Green Party Irish Language spokesperson, praised the participants in both debates for their command of current affairs and excellent oratorical skills. He expressed great interest in the discourse, and challenged the large audience in attendance with his own thoughts on the subjects.

The winning teams in both the junior and senior sections of the competiton were presented with perpetual trophies, along with a prize €1,000, and an award of €250 went to each of the other finalists. The winners also received a part Gaeltacht scholarship to a Gael Linn Summer College in Donegal.

Congratulating the winners on their accomplishment, Gael Linn CEO Antoine Ó Coileáin thanked the teachers for their help and dedication in preparing the teams.

“The Gael Linn debates are very popular with schools because they give students the opportunity to research topics and to present their case in Irish before an audience,” he said.

“Comórtas an Phiarsaigh cultivates young Irish speakers and we are delighted that the competition is going from strength to strength.”

Notable participants in Gael Linn debating down through the years include a host of high profile journalists and broadcasters such as Claire Byrne, Marian Finucane, Mary Kennedy, Harry McGee and Kilkenny’s own Evanne Ní Chuilin. Many have credited the Gael Linn debates with fostering their love of Irish and with giving them confidence in public speaking.