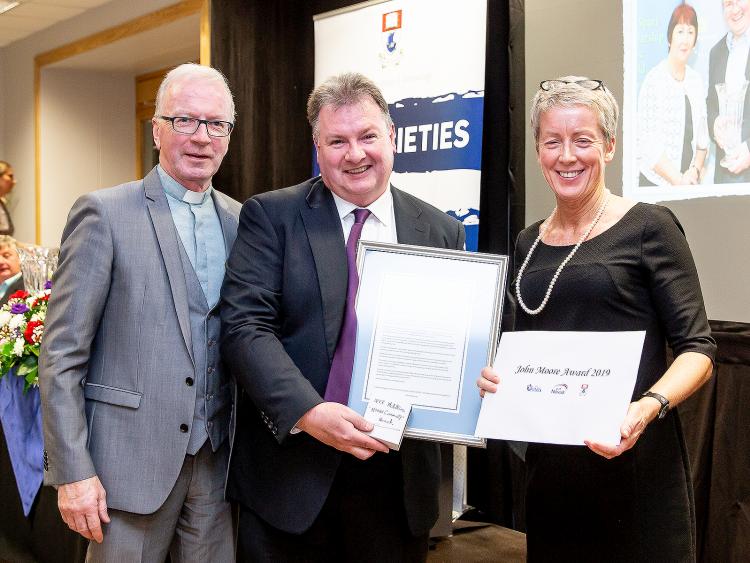 David Conway from Kilkenny receiving his WIT John Moore award for his many contributions to the institute community. David is with Fr David Keating and Angela Collins from the Careers Office.

A Kilkenny man has been feted for his contribution to Waterford Institute of Technology at an awards ceremony.

WIT Vikings Sport and Societies, in conjunction with WIT Finance Council and WIT Novus, recently hosted their annual awards night at the WIT Arena. The annual event is a celebration of students and individuals whose endeavours have greatly enhanced the life of the Institute.

One of the highlights of the awards is the popular John Moore award, which is made annually to the person who is judged to have made the greatest contribution to the Institute community in some way – social, personal, recreational, academic or organisational. This year’s worthy recipient was David Conway from Killkenny.

Dr Thomas O’ Toole, Head of the School of Business spoke on behalf of the Institute and outlined how “the night is a celebration of students and individuals whose endeavours have greatly enhanced the life of the Institute and is reflective of all that is great about WIT”.

“The purpose of these awards is to identify students and groups who have excelled academically, socially or in a sporting context over the past year,” he told those in attendance.

Are you from Kilkenny? Fancy spending seven days in the Irish wilderness

Kilkenny participants wanted for €4 million programme in the Irish wilderness