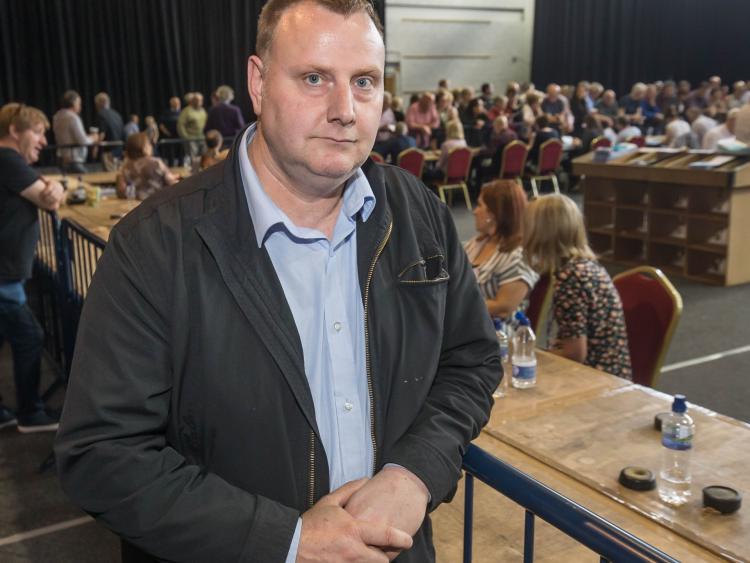 Kennedy at the count on Sunday: 'It has been my pleasure to serve for five years. I have enjoyed every minute of it'

Sinn Fein has suffered a serious reversal in Kilkenny in this local election, with the party failing to return a single elected member to Kilkenny County Council.

The three seats secured in 2014 seemed a long time ago on Saturday afternoon, with sitting TD Kathleen Funchion conceding they were in serious bother as the tallies came in.

“I’m very disappointed in how we’re doing — I would have thought we were in a much stronger position,” she said. “A lot of work was put in. We have a lot of questions to ask ourselves afterwards.”

In the city, Sean Tyrrell was in the hunt for the final seat right until the end with his first preference count of 548. He was co-opted to the council in 2016 following Deputy Funchion’s election to the Dáil, and it was his first time to contest an election. He transferred well from both Fianna Fail’s Andrew McGuinness’ surplus and People Before Profit’s Stephanie Hanlon following her elimination, but it was not enough.

In the south, new candidate Grace Doyle picked up 675 first preference votes. Melissa O’ Neill, who topped the poll for Sinn Fein in 2014 but has since parted ways with the party, secured 233 first preferences as an independent candidate.

In the Callan-Thomastown Electoral Area, David Kennedy was stoic in the face of defeat. He polled 728 first preferences and took a great vote in his own parish of Ballyhale, but as time progressed it became clear it would fall short of what was required.

“I knew when the boundary was changed that - as much work as I have done and would have liked to get done — I would be struggling,” he told the Kilkenny People.

“I banked on a few things that didn't work out. That’s politics. We’ll just go on now and get on with life, and I will spend a bit of time with my wife and family.

“Kilkenny has always been a conservative county. But it has been my pleasure to serve for five years. I have enjoyed every minute of it.”

Mr Kennedy wished his former colleagues well, and wished the best to all who put their names forward.