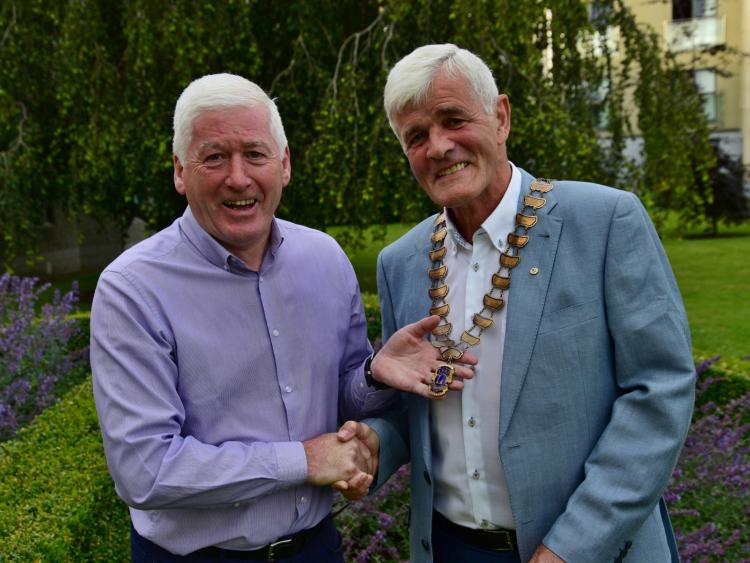 Kilkenny Lions Club has elected Rodger Curran as its new President for 2019/2020.

At the annual meeting, the outgoing President Philip Tierney handed over the chain of office to Rodger and wished him a very successful year as President.

Rodger is originally from Mullinahone and has lived and worked in Kilkenny, with his wife Nuala and family, since 1996. He previously worked in the education sector in Cork and Galway.

Rodger, who joined the Kilkenny Lions Club in 2008 and served as President in 2012/2013, said it was an honour and privilege to serve as President of a club teeming with so many energetic and committed members. He said that he looked forward to continuing the great work and outstanding service of the outgoing president Philip Tierney.

The past year, under the stewardship of Philip, has been very successful. The Club ran fundraising and community service events such as the Christmas Hamper Appeal, the Schools Concert, Wine Fair, Golf Classic, Street Collection, Carol Singing, a Duck Race on the Nore and with the generous help of local nurses, Diabetes Screening.

The Kilkenny Lions Club is very pleased to be able to support many of the local service societies and groups with the funds raised.

During Philip’s year the club gave assistance to more than 20 organisations dedicated to supporting families and those in need throughout Kilkenny. The newly-elected President said that but for the ongoing generosity of local businesses many of the projects would be much less successful. He appealed for continued support.

Rodger said that it would be a source of great joy to see Kilkenny Lions Club welcome new members to its ranks to cater for the expanding number of Lions activities.

He said that he hopes that his year as President will see this outstanding club having a very successful year supporting good causes and working in the service of others.