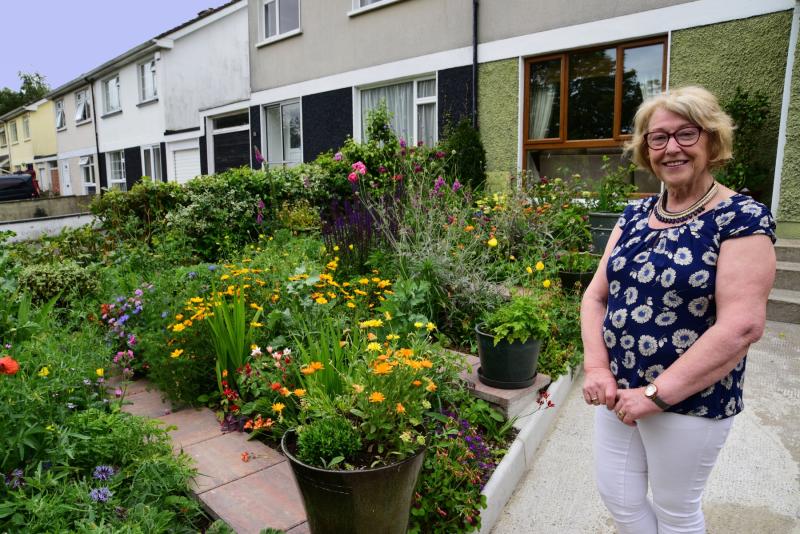 Judy Rhatigan in her magnificent garden in Kilkenny city

Having passed it many times over the past few months watching it develop, nosiness finally got the better of me and I decided that I would knock on the door to ask the owner of a particular garden I see regularly about their lovely creation.

As luck would have it, as I approached, the owner opened the front door and came out, making the request much easier.

Judy Rhatigan is the woman who should take a bow. Many will know Judy as an artist. She shows her paintings annually at the Kilkenny Arts Festival. Others will know her as a seamstress who saw to the costumes for numerous productions in the Watergate Theatre over the years. Other will know Judy as a writer, with two books under her belt.

Judy has also gardened for decades and it is her latest horticultural adventure that grabbed my attention - I should say my attention and that of most of the neighbourhood!

Earlier this year, Judy dug up the lawn at the front of her house and, with the help of her son Hugh, created a whole new exciting garden, an explosion of flowers and colours, a modern take on an old fashioned cottage flower garden in the city. It is a garden people take a detour to look at.

The Riverside Drive house faces the river and the park, with its meadows and wild planting. Working in such a blessed situation, Judy decided to do something special with her front plot. So, the sloped square front garden was dug up. Hugh cleverly took advantage of that slope, by putting in a series of terraces divided by stone steps or ledges.

Judy then filled each metre-wide terrace with her best homemade garden compost and began to plant. The plants are mostly perennials and annuals. So when they went in back in the late spring, it all looked neat and modest, with lots of little plants. The most notable thing about the new garden was that stone ledged structure and the series of pots that bookend the ledges, adding extra height to the display.

Perennials grow fast and by early summer, the steps and ledges were barely visible under a riot of flowers and bees. They crawl in and out of the poppies, foxgloves and perennial corn flowers.

There are tall purple salvias and even taller, loose explosions of Knautia macedonica , a particularly good looking member of the scabious family. Right through the different levels, there are cheerful splashes of marigold. The marigolds came as uninvited but nevertheless, welcome guests, arriving from the little stone ledge borders that can be seen along the length of the road across from the houses. These borders too are Judy’s gardens, in a way.

Back in the 1970s the residents committee asked the council for permission to put some sort of garden along the grass verge outside the river park. Stone was supplied and alongside a stonemason friend, Judy’s then teenage son Hugh, helped to make eight raised stone borders.

The residents planted them up and maintained them over the years. The men would come out and plant up the borders and, as Judy told me,“ we’d all look after them.” The neighbours keep these colourful beds minded and pretty and they have given years of pleasure to people round and about.

However, as Judy told me, when they were planting the borders up, the Council took away the existing park benches to paint.

“And we’re still waiting for them to be returned!,” she said.

That was 46 years ago. I wonder where those benches are now? Still, it is all looking wonderful down on Riverside Drive.

Before leaving, I took a quick look at Judy’s back garden and really, if the front is an interesting departure from the norm, then the back garden is quite simply revelation. In the sort of small space that modern back gardens are usually given, Judy has managed – again with the brilliant Hugh to create a most amazing tree house/summerhouse/tea house in the sky.

From a busy back garden full of cordylines and rambling roses (some of which Judy grew from roses given to her as presents), there is a stairs that climbs up and in through through a curtain of Boston ivy or Parthenocissus cinquifolia, leading to this charming elevated garden room. Some of the more rampant roses clamber in the ‘widows’ and drapes of various creepers make you think you have moved into a jungle house.

It is a remarkable creation, completely bedded into the garden and yet magical, secreted away and otherworldly.

Judy Rhatigan’s new book ‘Beyond The Briary Wood’ is for sale in the Book Centre.