Taoiseach in Kilkenny as work under way on new Brewhouse vision 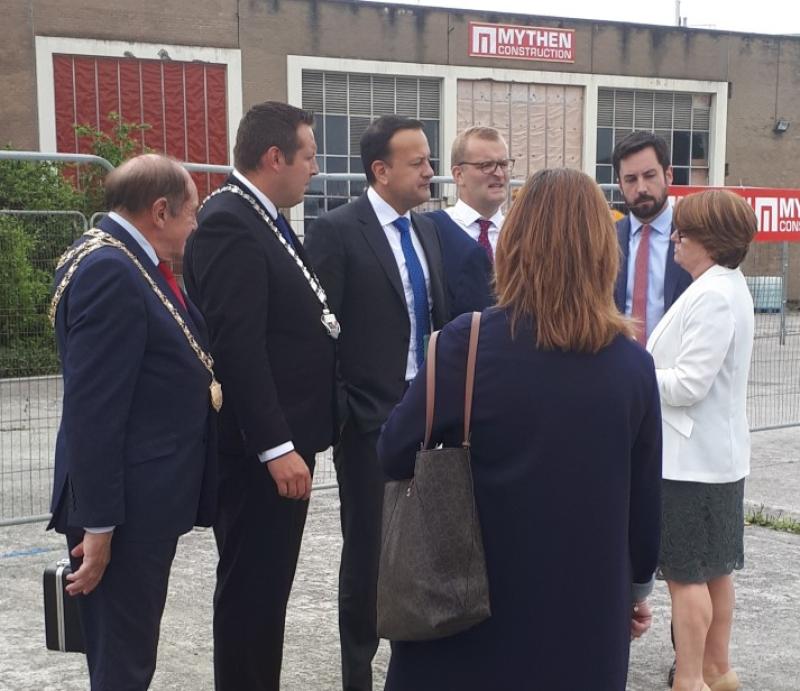 Taoiseach Leo Varadkar was in Kilkenny this morning to help launch a major refurbishment project at the old brewhouse building on Kilkenny's Abbey Quarter.

The building is to be brought back in to use as high grade office space, and will involve public realm enhancements and the creation of a new square close to. It is the first major project to be launched on the 12-acre Abbey Quarter site following its acquisition by Kilkenny County Council.

Mythen Construction has been contracted to bring the building back into use. The contract also provides for the upgrade to public realm along Horse Barrack Lane and the creation of Brewhouse Square to the rear of the Brewhouse building.

Chief Executive Officer of the Abbey Quarter Partnership Jason Clerkin has said he expects the building will be ready for fit-out by the summer of next year.  By late autumn this year, it is hoped work to construct a riverside park and a new skatepark area will be under way.

The rest of the site, which fronts the River Nore, is earmarked for a number of public realm and public/private developments, including a new public library in the Mayfair.

Speaking at the launch, the Taoiseach said the project fitted in to the Government's vision to invest in more compact, sustainable, community-centred developments.

"Over €6 million has been granted to Kilkenny County Council to help achieve the vision for the Abbey Quarter, with the 800-year-old abbey as its stunning centrepiece, a new linear park running along the banks of the River Nore, and public realm works around the iconic brewhouse and Mayfair buildings, and the renovation of two 19th Century teahouses," he said.

Cathaoirleach of Kilkenny County Council Peter 'Chap' Cleere said it was fantastic to see activity on the site.

"I acknowledge it has been frustrating for the general public over the last while wondeirng when they would see physical progress on the site," he said.

"I am confident over the next 12 to 18 months, the public will see much more activity and will be able to see the work progress on the Abbey Quarter for themselves."