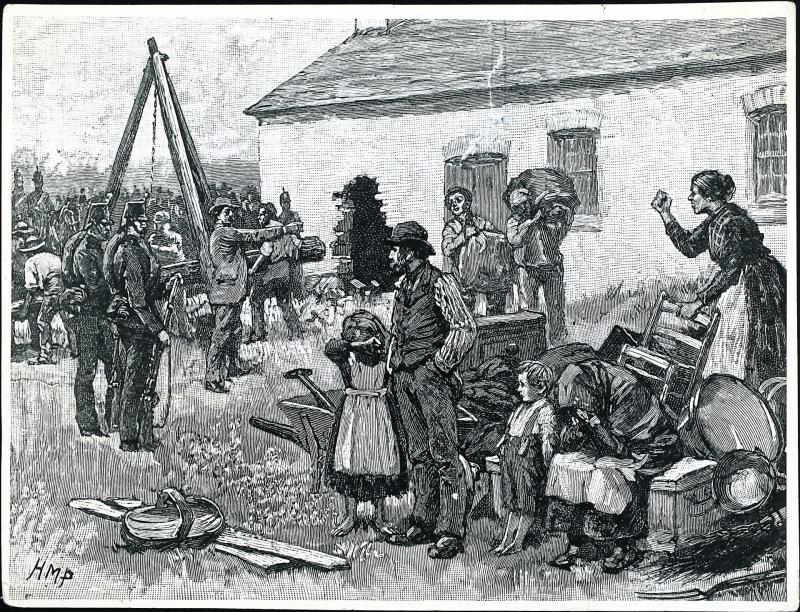 From descriptions of the failed potato crop to calls for more sources of employment for starving men, the description of Kilkenny’s starving have come to light following a new study into Famine Relief Papers from 1844-1847.
The study shows the real-life scale of the destitution faced by Irish people in the lead up to the famine, providing an intimate insight into a defining moment in Irish history.
The Relief Commission and subsequent relief committees around Ireland were formed just prior to the official beginning of the famine to oversee relief efforts, distribute food, collect information and advise the government on the famine, the people and aid efforts.
Soup kitchens were set up, but in 1847 the government shut them down, anticipating a better crop which never materialised. Another piece of the relief plan was creating government work projects, so that those who were able could earn money to buy food.
During the Great Famine over one million people died, and a further million left Ireland. More than a century and a half later, Ireland’s population had still not returned to pre-Famine levels.
Hand-written letters and documents provide first-hand accounts of the levels of destitution faced by starving people in Kilkenny.
Protest in Kilkenny
On 27 March 1846, Inspector WJ Waraston, to Colonel Duncan McGregor, Inspector General of the Constabulary, wrote a letter to the Relief Commission telling them of a protest outside the Kilkenny poor house, by 100 labourers demanding food and employment.
“I have to report that on yesterday the 26 instant about 100 men of the lowest grade of the labouring class assembled at the poor house of this town to demand employment or food for themselves and families.
“They stated that they were starving and many of them declared they had not had food for two days and could not obtain employment and that there were willing to earn if they could get work, and unless they were afforded relief they would have resort to violence to obtain it.”
Distress in Crannagh
On 30 April 1846, Rev. Luke Fowler, wrote to the Relief Commission reporting there were 915 people in distress in the Crannagh area.
“In reference to our report lately forwarded with show that the district or parish contains two thousand two hundred inhabitants, the village contains above 2,070, of whom 251 families consisting of 915 persons are destitute of provisions, or very rapidly approaching that state. Many more will soon have exhausted what little provisions they have.
Starving in Ballyouskill
On 28 April 1846, Richard William Lalor, secretary of the Ballyouskill Relief Committee sent a letter to the Relief Commission detailing the conditions in the Ballyouskill area.
“I have the honour to communicate to you that the parishioners of Ballyouskill parish who with one exception and small farmers seek a donation from the Lord Lieutenants relief fund under the following circumstances.
“Sixty families of working people without food except what they buy from week to week on credit at high prices.
Forty families have bad potatoes for a fortnight, three weeks or a month. There is here just now some employment for the able bodied of them with the farmers but they will all be unemployed after potato planting, some in a fortnight, others in three weeks, all in a month.”
Calls for relief and funding in Muckalee
On 23 June 1846, Rev. Michael Birch described the conditions in the parish of Muckalee to the Relief Commission. He also asked the Commission for a portion of their funding to help him feed the distressed.
“I am compelled from the extreme distress and absolute want under which the poor labourers and small farmers of this extensive and mountainous parish labourers endure to call on you for the relief and praying that a portion of the fund at your disposal may be sent [to] them to purchase food for them.”
Freshford conditions
On 16 March 1846, Rev. Luke Fowler, Rector of Freshford, wrote to the Relief Commission describing conditions of the people in the Freshford district.
“That the works therein recommended through the great utility would not be sufficient to give employment and relief to the poor of the town of Freshford.
“That the town of Freshford alone contains upwards of two thousand inhabitants; that a great number of these are actual paupers. That besides these upwards of 1,000 are dependent on labour for support.
“That of the remainder, very few persons indeed are able to give assistance to their poorer neighbours, either gratuitously or by employment. That the poor are almost universally in the habit of providing a considerable portion of their food by the system of con acre.
“That in consequence of the failure in potatoes, all have suffered a material diminution of their provisions. That therefore unless some means of employment can be provided for the labouring population the greater number of them will be shortly reduced to the utmost distress.”
Ancestry’s Joe Buggy commented, “Documents and letters sent to the Famine Relief Commission provide a unique insight into the level of destitution, pain and hunger around Ireland during this time.
From the collection one can sense the rising panic, with stock and food levels rapidly running out and committees pleading with the commission for help.
Through the collection it is now possible to search for family names and local areas to see how exactly people were affected by the turmoil of the Great Famine.”
Ancestry is the world’s leading family history site containing the largest
collection of family trees with over 100 million family trees from over 100 countries.
In previous years they have completed new research into Irish collections including records of Irish convicts sent to Australia and an interesting look at Irish first names that are becoming endangered.
To search the Famine Relief Commission Papers log onto www.ancestry.ie.
The records are searchable by name, date and the county in which they occurred.