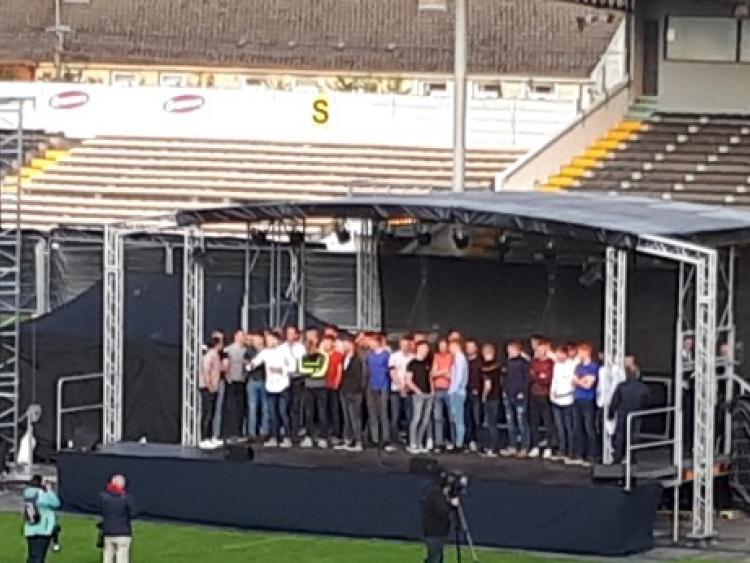 The Kilkenny team on stage in Nowlan Park

"We were as proud of the players as we ever were in Croke Park."

The words of Kilkenny manager Brian Cody, who has guided the Cats to eleven All-Ireland titles, as he addressed  supporters at Nowlan Park this evening at a Civic Reception hosted by Kilkenny County Council.

Thousands thronged the streets of Kilkenny City, and more at Nowlan Park to welcome home the senior and minor hurling teams from Dublin. The teams  turned up at Kilkenny Castle around 6.30pm and made their way through the Medieval City on open top bus before arriving in Nowlan Park after 7pm.

Describing it as an emotional evening, County GAA Chairman Jimmy Walsh thanked the outstanding support for the team from the people of Kilkenny.

Team manager Brian Cody also thanked all the supporters, the county board and his team and management for the efforts during the year.

"We didn't get the opportunity to build on a terrific first half performance, to have a chance to take on the great Tipperary team in the second half, fight it out to the bitter end, fifteen on fifteen," said the Kilkenny manager adding "We were as proud of the players as we ever were in Croke Park" as he praised the team for their outstanding competitive spirit to the very end.

The crowd were warmed up by an outstanding performance from The Kilkennys, and despite defeat and no silverware, Kilkenny supporters gave a rousing reception to both the minor and senior teams - with senior captain TJ Reid in particular receiving one of the biggest cheers of the night when he walked on to the stage.

Full report and pictures in this week's Kilkenny People