Callan plans to install locally made limestone pillars with LED lights, a battery bank and powered by solar photovoltaic panels at the Abbey Meadow Walkway and to roll out electric vehicle charging points 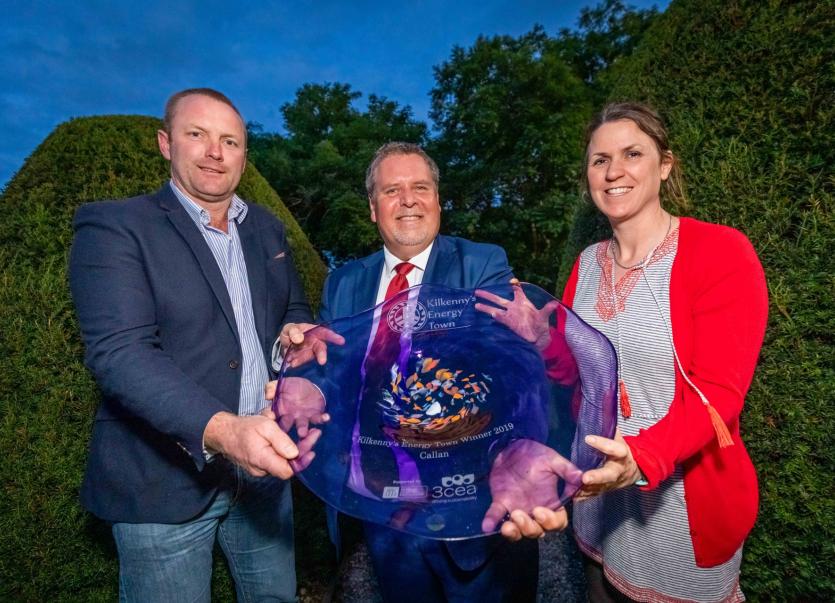 Callan has scooped €100,000 plus in supports and is leading the way in a landmark sustainable and renewable energy competition which the organisers hope could catch on - not just in Ireland - but has the potential to be replicated globally.

Kilkenny LEADER Partnership (KLP) teamed up with the internationally-renowned and locally based 3 Counties Energy Agency (3 CEA) at the start of this year in an all-out bid to find Kilkenny’s 'Energy Town'. The whole-county initiative supported communities and business interests in a number of qualifying, mid-sized towns in the county to become more sustainable energy efficient and to reduce their carbon emissions.

Callan was crowned Kilkenny’s Energy Town and received a stunning, custom-made trophy which was designed and hand crafted locally by Jerpoint Glass Studio. Callan was singled out by the independent panel of expert judges for its innovate packages of projects submitted under the project.

As part of its winning submission, Callan plans to install locally made limestone pillars with LED lights, a battery bank and powered by solar photovoltaic panels at the Abbey Meadow Walkway and to roll out electric vehicle charging points across the town. The winning group also plans to oversee an energy efficient upgrade of the old bacon factory to include renewable technologies.

Thomastown, Castlecomer, Callan and Graignamanagh engaged with 3CEA and KLP in the competition. Numerous energy saving ideas were mooted and discussions followed. While there is only one winner, KLP CEO, Declan Rice, commended all the competing communities on their drive and passion and genuine commitment to become more sustainable.

“All of the competing towns are winners. They are beating the pathways for others to follow suit," said Mr Rice.

"Voluntary and community groups, small and large businesses, community members with knowledge and interest in renewables and others with little or no technical expertise or knowledge but a genuine passion to go green all came together and pooled their ideas for this competition.

“While Callan are the overall winners, both KLP and 3 CEA hope to continue to work with the runners up to help make their plans a reality. With a little more expert help and support, we aspire to making Kilkenny a shining example for the rest of Ireland. This competition shows a genuine, heartfelt and deeply-rooted desire and need to go green and we really see this successful competition template being emulated elsewhere."

The competing towns audited their current use of energy and carbon emissions and developed a plan to optimise their energy sustainability. It is hoped that the competition will spur other towns to take charge on the energy use and carbon emissions, and in the current the global environment encourage community groups and small enterprises to work together on a carbon reduction plan and more.

“A competition like this has never run in Ireland,” Mr Rice said.

“It has worked. We’re hoping now that it will be replicated regionally, nationally or transnationally. Competing communities in Kilkenny submitted detailed, aspirational yet deliverable plans for optimal use of the available local sources of renewable energy as well as carbon reduction proposals. We want other counties to follow suit to help Ireland significantly cut its carbon footprint.”

The multi-disciplinary 3CEA team were the technical support provider and worked with competing communities to draft their specifications for the plans and in the assessment of those plans. Energy Engineer with 3CEA, Jane Wickham, said: “We work with householders, businesses, industry and communities across the three counties of Kilkenny, Carlow and Wexford and beyond and know from our daily work that there is a genuine appetite out there among businesses, among householders and communities to become more energy efficient and reduce harmful emissions.

“We look forward to engaging further with Callan now to deliver on their plan and with the runners up, Graignamanagh. This competition is helping making Kilkenny one of Ireland’s most sustainable energy hubs for generations to come. This competition may be over but in truth, it is just a beginning. The desire and commitment shown by the competing communities was extremely heartening. It has really supported and encouraged communities to think locally and act globally. That is what the competition was all about.”

For more, check out www.cklp.ie and 3CEA.