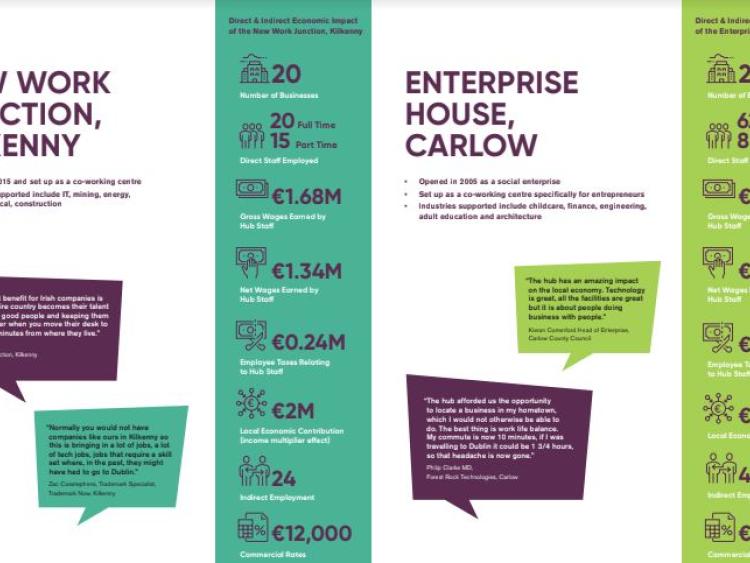 From the report authored by Jim Power, and commissioned by Vodafone Ireland

The first-of-its-kind report, carried out by economist Jim Power, and commissioned by Vodafone Ireland, has found that Kilkenny's New Work Junction generates over €2 million for the local economy and has created 35 jobs directly and 24 indirectly. New Work Junction digital hub is home to 20 businesses with combined net wages of €1.34 million – generating €0.24 million in taxes.

The study, which was was undertaken to assess how smart working – flexible or remote working from home or a hub – can help rural communities thrive in a meaningful way.

Separately, the report follows the announcement last week that a Pennsylvania-based cyber security consulting company is establishing a European Headquarters and Security Operations Centre (SOC) in Kilkenny. Security Risk Advisors (SRA) will create 52 jobs over the next five years.

The Department of Computing at Institute of Technology Carlow has welcomed this announcement, saying it has the skilled cyber security graduates "to ensure SRA can hire employees from the region with the most up-to-date, industry-ready cyber skills it needs”.

In terms of financial contribution, the combined economic data collected from each of the six hubs involved in the report reveals that they employ 462 people, host 176 businesses, contribute €27.3 million to the economy and €18.2 million in net wages earned. All of the digital hubs are operating at or close to full capacity and all want to expand their physical space further to satisfy significant growing demand.

According to the report, at a national level, if a digital hub was established in every county around Ireland; the potential to make a very significant economic, social and financial contribution across the country is very real. It says that nationally, smart working, with digital hubs in every county, could generate €312 million for the regional economy and create over 8,400 new jobs across over 1,000 new businesses.

According to the report, there are socio-economic pressures on urban centres and the businesses and communities based there. Cities are growing rapidly, commercial and residential rents are rising, childcare and transportation costs are increasing, and traffic congestion is at all-time high.

Alongside alleviating urban migration and slower regional economic growth, the study suggests that the widespread adoption of smart working would result in a significant reduction in congestion and commute times, ease pressure on housing in cities, provide greater availability of school places and generate more employment of young graduates locally.

“In a world where issues such as climate change, congestion, more balanced regional economic growth and development, and quality of life are becoming increasingly important and topical, the contribution that remote working will make to addressing these problems is very significant," says the author of the report, economist Jim Power.

"With proper connectivity, there is no reason why remote working cannot grow in significance. This will benefit local economies, the environment and the wellbeing of employees and business owners. It is an unambiguous win-win situation.”

Tom O’Neill, Hub Manager at New Work Junction, Kilkenny, said: “The biggest benefits for the businesses within the Hub is being able to use the world as their talent pool, rather than just having a local talent pool. Secondly, staff retention is much higher because companies are actually doing something real for people’s quality of life.”

Director of Enterprise at Vodafone Ireland, Regina Moran, said the study clearly shows that the creation of viable smart working opportunities in a hub, homeworking or a hybrid model in Ireland’s regions could prove transformative for people, businesses and local communities.

"The findings, which attest to substantial income generation and improvements in people’s quality of life, offer a viable basis for wider adoption of smart working in Ireland," she said.

"It also provides proof of concept that smart working and digital hubs can act as a stimulus to addressing the urban and rural socio-economic challenges that exist in Ireland. Gigabit connectivity is fundamental to achieving that."