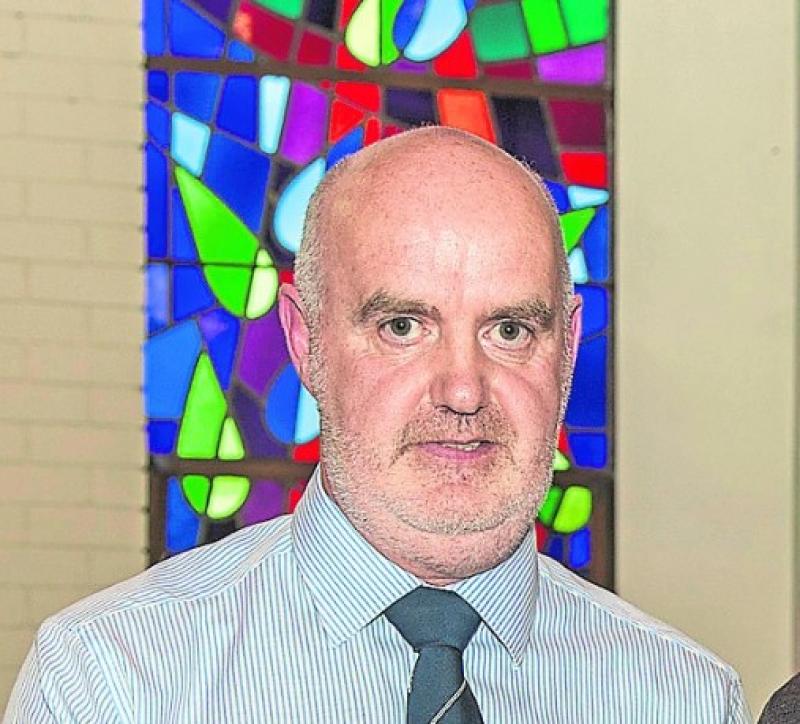 As the students of Coláiste Éamann Rís broke up for the summer holidays in late May little did they think that when school resumed in early September they would be without their much loved and inspiring school Principal Br Damien.
While school was closed for the three months summer break Br Damien was fighting a huge battle to which he finally succumbed on Tuesday, September 3.

One of a family of 12 from Arles, Co Laois he was born into the GAA family, his father serving as Laois County Secretary for 25 years.  He was educated in Carlow CBS where he first came in contact with the work of Edmund Rice.
Br Damien joined the Christian Brothers, received Habit in 1978 and worked in various schools in Dublin and elsewhere in Ireland.
He was appointed to Callan CBS as a teacher in 1990.
He immediately got involved in coaching teams in the school and was joint manager when Callan CBS won the All-Ireland B Colleges title in 1991.

He was also manager when Callan won the Colleges Senior A Leinster title in 1998 and even though he had moved to Dublin during the year, he commuted to Callan to train the team three times a week.
His talents were soon in demand at county level and he became part of Nicky Cashin’s minor management team in 2001, winning an All Ireland in 2002.

He took over as manager from Nicky Cashin for the 2003 season, winning that year’s minor title as well.
He served as manager for another three seasons, winning two Leinster titles. Many of Kilkenny’s successful four-in-a-row team passed through his hands during his involvement with those minor teams.
Our first encounter with Br Damien in John Lockes came in 1991 when he was persuaded by his fellow Laois man and teaching colleague at Callan CBS, Tom Walsh, to train our junior football team.
Now, junior football in Kilkenny wasn’t at a very high standard at the time and I’m sure Br Damien was well aware of this too, when taking on the role.

But his enthusiasm, commitment, honesty and energy had us all hooked.
Over the subsequent years, as we got to know him better, we found those other great characteristics that he possessed - integrity, humility, compassion and humour.
Commitment
When he returned to Callan in the late 1990s and got involved in coaching and training our teams we again saw his passion, enthusiasm and commitment to the task.
He never took on a task lightly and always considered it deeply before taking it on. But when he did take it on, he gave it his all and expected the same from everyone else involved, players and mentors alike.
I can recall him travelling back from Donegal where he was on holiday to train our intermediate team one evening and returning to Donegal that night after training.

This passion and commitment to the team, I feel, directly led to that team achieving the ultimate prize of winning the 1999 county intermediate title.
Br Damien served on many club committees for 20 years or more. He was chairman of our Development Committee which planned and developed our fine facilities in John Locke Park.
He served as the club’s County Board rep for 15 years until his passing, as well as drafting up our five year plan, Code of Conduct and updating our club Constitution.

His knowledge, honesty and integrity were so vital to all of us working with him on those various projects and committees.
While Br Damien took every role or task seriously and his motto was always “let’s do the right thing here now fellas”, he was great company and had a great sense of humour.
We enjoyed sharing stories with him of incidents that happened at games and of his efforts to be peacemaker when rows broke out and to save some poor referee that had got into trouble.
Br Damien’s compassion was probably his greatest attribute.
He was quoted as saying that he could always see some good in every person he came in contact with.
We have heard over the past few weeks of compassionate deeds he has done in his lifetime. I’m sure we’ve only heard a fraction of them.

There are many of us in John Lockes that encountered his compassion over the years. Back in 1999, when one of his fellow selectors on the intermediate team was seriously ill in St Vincent’s Hospital, Dublin, Br Damien brought him a relic of Blessed Edmond Rice and prayed over him for a number of hours.
The following day there was an improvement in his condition and he subsequently made a full recovery.
His willingness to give people an opportunity to maximize their potential is now legendary, be that in whatever path in life they chose.

Club and county players benefitted from the work he did to instil belief in themselves and realise their true potential.
Br Damien spent the last 20 years in Callan serving as a teacher, Deputy Principal and, for the last four years, as Principal in Coláiste Éamann Rís.

He was chairman of the Board of Management also and was a major driving force in the amalgamation of the two primary schools in the town.
He had 40 years teaching experience and was the last Christian Brother teaching in Ireland.
His lifelong devotion to Edmund Rice was total and was reflected in his own life through his commitment to education and religious life.
For us in John Lockes we will miss him greatly. We will miss his commitment to our club, his sense of humour, his advice, his enthusiasm and energy.
He was a preacher, a motivator, a healer and a good friend to all that knew him. We thank this man from County Laois who came to our town and club, for all the good he did and for the people’s lives he touched. I don’t think I’ve ever met a finer human being.

It’s hard to believe this man we thought was indestructible is no longer with us. It is of some small consolation that he chose to be buried in Kilbride, Callan, so when we need some inspiration he is close at hand.
May the sod lie gently on his breast. Ní fheicfear a leithéid arís. May he Rest in Peace.