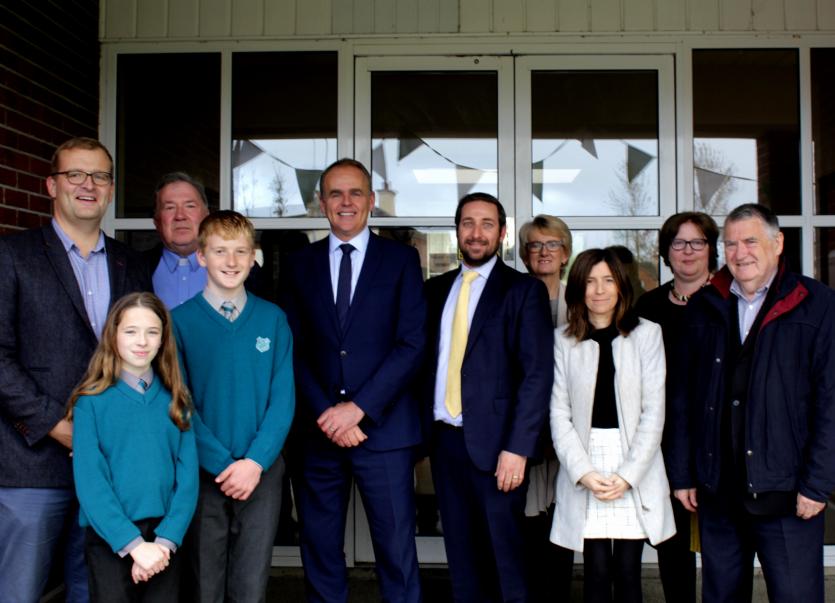 Minister for Education Joe McHugh is greeted by Principal Brian Roche, staff, students Sarah and Jeff, and members of the Board of Management at St John's Senior School

The Minister for Education Joe McHugh has expressed his support for a potential amalgamation of the St John’s Junior and Senior Schools in Kilkenny City.

The minister was speaking on Friday afternoon as he visited St John’s Senior School to meet staff and students, and discuss the matter with a working group. There was huge excitement in the school ahead of the visit — the first ministerial visit the school has ever had. Principal Roche described it as ‘a momentous day’. Minister McHugh was greeted at the door by sixth class students Jeff Tyrrell and Sarah Bryan, who conversed with him as gaeilge.

“We had a great meeting. I must say, the research and analysis everyone around the table has done is fairly extensive,” said Minister McHugh of his talks with the working group.

“They are also very realistic — and I think their pragmatic approach will allow now for a proper conversation in looking at the possibility of amalgamation. I’m very interested in pursuing that. I’ll ask my officials to follow up.

Minister McHugh said, however, that there would be plenty of work to do.

“There will be short-term challenges as well, because a new school just doesn’t arrive this year or next year, so there are a lot of issues to be sorted out,” he said.

“But what I’ve said to the group today — the working group is — I see the pragmatic and practical and realistic benefits of what they are trying to do. So I will ask my officials now to give a serious examination of a potential amalgamation.”

Principal of St John’s Senior School Brian Roche said he was very encouraged by what he had heard.

“It was a very positive meeting,” he said.

“He thinks it makes sense that the two schools would amalgamate, and that a new school would work.

Mr Roche said that over 1,000 students crossed the River Nore from east to west each day to attend school, and there was a large and growing population in the eastern environs of the city.

“It would involve a new school campus; he stopped short of saying he would give us one,” said the principal.

However, if a site is available, the minister has indicated he would potentially support its purchase.

“But he would have to talk to his officials about it, and will tell the officials he would be supportive of the amalgamation,” he said.

“It would give us an opportunity to deliver the resources that the people of John’s Parish need and deserve.”

The school has existed since 1949, and has recently opened an ASD class facilitating students with autism and special needs.