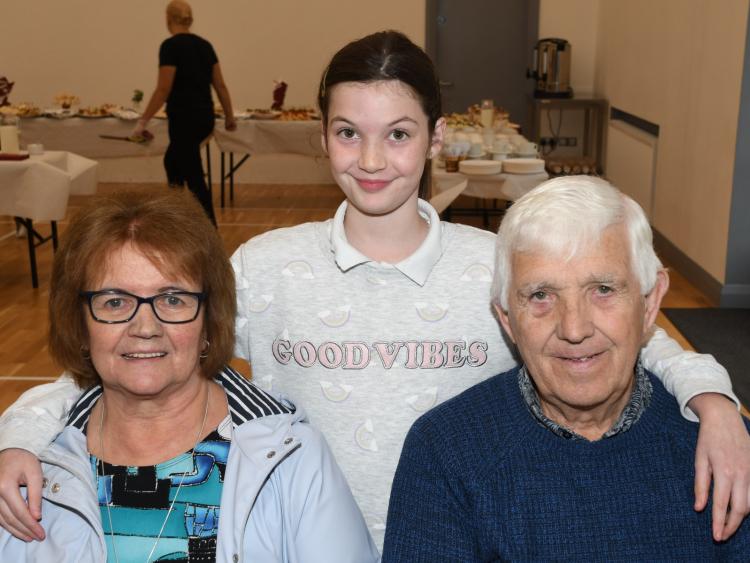 Nancy, Tamara and Christy Whelan at the Opening of the new Windgap Community Hall

These are exciting times for the village of Windgap unveiling its latest community initiative which has already transformed the village and its environs.
Windgap Community Centre, shop and tearooms were officially opened recently with around 350 people attending what was a joyous event.
In what was a very moving gesture, the ribbon cutting for the wonderful facility was carried out by Bea Flavin, sister of the late Fr Nicholas Flavin, the local parish priest who was a former chairperson of the most recent iteration of Windgap Development and one of the key drivers of the project.
The upstairs meeting room has been dedicated to his memory.
There was a sustained round of applause following the opening by Bea.
Two great supporters of the project, Christy and Nancy Whelan who live close by attended the opening on Saturday.
Special guests included Cllr Peter Chap Cleere, Cathaoirleach of Kilkenny County Council and Minister for Local Government John Paul Phelan and local councillors Joe Lyons and Matt Doran.
Tony Doyle in his chairman’s address made special reference to the late Mary Egan from Tullahought, who passed away earlier this year after lifelong service to volunteerism in Windgap and Tullahought.
She was a powerful woman and her presence was missed.
Mr Doyle thanked the government agencies and the community of Windgap and surrounding areas who so generously supported the project.
Milestone
The playground committee were also lauded for achieving a massive milestone for the community.
An ecumenical blessing was performed by Fr Fearghus O’Farrell and Rev George Cliffe.
Speakers on the day included Councillor Cleere, Cathaoirleach of Kilkenny County Council; Minister for Local Government, John Paul Phelan; Denis Drennan, Chairperson Kilkenny Leader Partnership; Paddy Phelan, manager of the Three Counties Energy Agency and Councillor Matt Doran and MC Noel Smith.
Entertainment was by the children of Scoil San Nioclás NS, Irish dancers from The Aishling Keogh School, local tenor- Thomas O’Callaghan and John Ryan and the Wild Geese.
The committee was introduced to the audience: Julie Walsh O’Brien, Noelle Egan, Michelle O’Brien, Tony Doyle, Simon Brophy, Brian O’Rourke, Shay Power and Noel Smith.
The community shop and tearooms are open Tuesday to Friday 9am to 4pm, and on Saturdays 10am to 2pm.