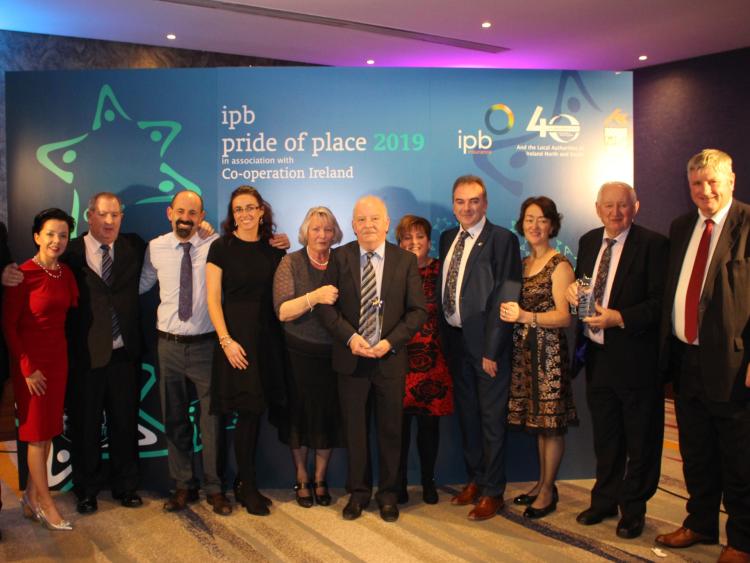 Celebrating Kilkenny success at the Pride of Place awards

The South Kilkenny village of Kilmacow has been honoured at the all-Ireland 2019 Pride of Place Awards, which took place in Lyrath Estate Hotel on Saturday evening.

The village took stop spot in the Community Wellbeing category, edging competition from Fettercairn Health in South Dublin and The Boherbue Footpath in Cork.

In recent years a working group was formed to represent all local groups and organisations. This ensures that the presentation of Kilmacow is inclusive of the wide range of community based activities that are available locally and reflects the contributions that so many people make to the social, sporting, community, and cultural life of Kilmacow.

“Community well-being springing from a generosity of spirit and unity of purpose was much in evidence on the day of the judges’ visit,” said the judges .

“Inclusivity is the byword of a very diligent and committed working group and this was fully and faithfully demonstrated to the judges whether it was the provision of a residential and retirement village or putting people with disabilities at the heart of the community.

“There is a very real sense that this holistic approach is successful and will continue to prosper in what is looking like a very bright future for the village.”

Meanwhile, Ballyhale came runner up in the ‘Best Village’ category with a population up to 300 people.

Ballyhale Development Association was initially formed to look after the needs and upkeep of the village in Ballyhale. Their focus became more widespread following the opening of the M9 Motorway which saw the village bypassed followed by the detrimental impact of the recent recession as the village lost shops, pubs, a post office, garda station and a number of businesses.

Rural isolation and deprivation was rife as there was no central point or hub for locals to meet or congregate. The Ballyhale Development Association was committed to addressing the demise of their village and since 2014 they have successfully implemented a village plan that has successfully developed a number of infrastructural and community projects including the hugely successful community cafe called the Billys Tea Rooms.

Sponsored by IPB, the Pride of Place competition was initiated 18 years ago though a Co-operation Ireland programme to acknowledge the invaluable work undertaken by volunteers and those involved in local community development. Dubbed the ‘Oscars of the Community Sector’, it has grown into the largest competition recognising community development achievements.

Around 900 representatives from counties across Ireland gathered for the awards, hosted by Kilkenny County Council.

“These awards continue to be as important as ever after all these years and the purpose of the awards has never changed,” said Pride of Place founder and chairman Tom Dowling.