The competition attracted more than 2,600 entries from national schools 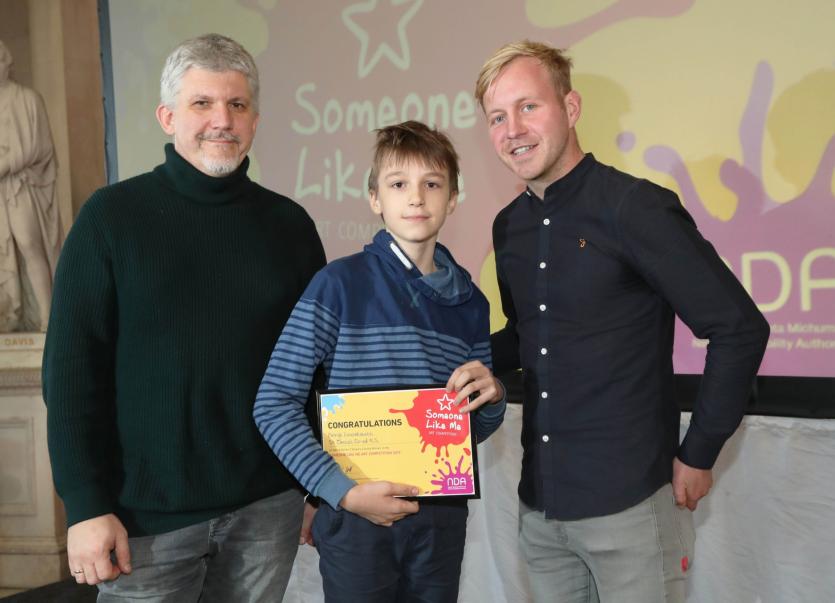 A sixth class pupil from St Canice’s Co-Ed National School has been presented with a senior category county winner’s plaque for his entry in the 'Someone Like Me' art competition.

Patryk Loszakiewicz impressed the judges with his submission - a pencil sketch of various superheroes with the caption 'We are all super in our own way'. He and his teacher Ms Casey were selected as county winners based on their insightful and inspirational responses to the theme.

The competition, which is supported by the National Disability Authority, attracted more than 2,600 entries from national schools across the length and breadth of the country.  Now in its fourth year, Someone Like Me aims to raise disability awareness among primary school children and give them a greater understanding of what unites children of differing abilities.

The competition saw them join 48 other schools to compete for the much sought-after national title at an awards ceremony held at Dublin City Hall on the International Day of People with Disabilities.

In order to enter the competition, teachers and their pupils worked through a special lesson plan which challenged them to respond artistically and creatively to the theme of Someone Like Me, while, at the same time, appreciating and respecting similarities and differences in people, developing a shared understanding of how we should treat others in a caring, sensitive and inclusive way, and promoting a sense of belonging and connectedness.

Congratulating St Canice’s Co-ed National School on being named county winners, Minister of State with special responsibility for Disabilities Finian McGrath said that he was hugely encouraged by the growing interest in the competition.

“We are exceptionally pleased with the response to this year’s competition which illustrates just how willing our primary school teachers and pupils are to help build a more inclusive Ireland where everyone, irrespective of ability or disability, is treated with equal respect and feels like a valued member of society,” he said.

“There are almost 650,000 people in Ireland with a disability which equates to 1 in 7 of the population.  Almost 10% of that number are children aged 15 and under.  Initiatives like this are an important part of the work carried out by the Department of Justice and Equality to promote inclusiveness and I would like to pay tribute to the commitment of the teachers who invested important classroom time in working on their competition entries."