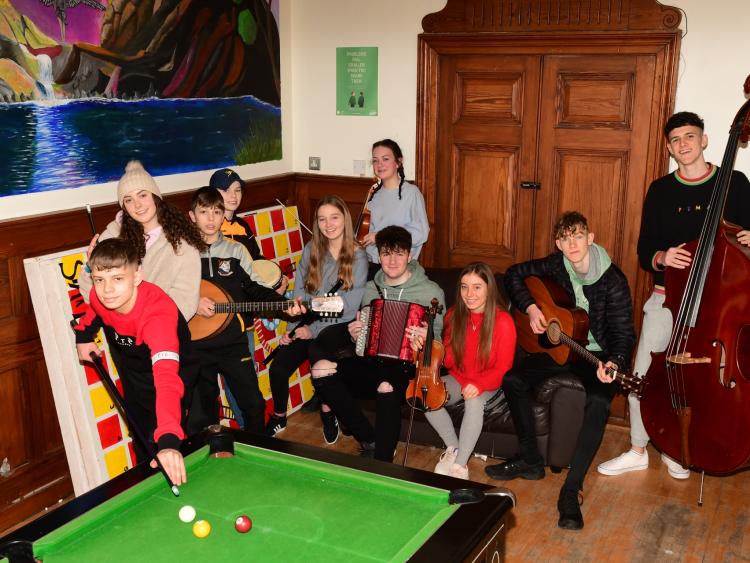 Gaeltacht Kilkenny are an exciting, spirited new group of musicians who are fast making a name for themselves in musical circles.
As their name suggests, they are steeped in Irish culture and the language but theirs is a music which exists in the here and now.
They blend their music with a look back and respect for the tradition but with an awareness of other genres. Their family backgrounds are a mix of pop, blues, jazz and classical music.
All teenagers, they came together to form the group in 2018, with a real desire to explore, compose and perform with as much fun as possible!
The group are mentored by Seathrún Ó Casaide and Gráinne Ní hAilínn, both well known in musical circles, but GKK bring their own strengths to their music and performance. Each appearance shows real progression, a sense of their hard work and attention to detail.
They’ve appeared at Kilkenny TradFest in 2019 and had their own highly successful concert at Cleere’s Theatre, Kilkenny in April of that year.
Martin Bridgeman of KCLR described that night as being akin to being in the Cavern Club for The Beatles first headline appearance.
They’ve recorded a song in praise of Kilkenny hurling, “Dubh Agus Omra” (Black and Amber, as Gaeilge) and were selected to perform live in RTE’s “Up For The Match” where they found a highly receptive audience.
They also played at the Kilkenny team homecoming. Since that appearance they have been contacted by a number of people involved in the Irish music scene offering financial support towards their debut recording.
The next phase in their development as a band is to produce this debut album. The plan is to record it ‘live’ and this will take place at the Set Theatre on Friday, January 31.
Recording on the night will be handled by Kilkenny sound engineer Ferdia Bridgeman, who has was worked closely with the band for some time.
Tickets are moving fast for what promises to be an excellent and exciting night of music, and are available from Rollercoaster Records in Kieran Street.
Gaeltacht KK are: Lia Nic Chonraí (Flute), Fionn Ó Duibhir (Accordion, concertina), Sadhbh Ni Chasaide (Fiddle, vocals), Noah Schneider (Double bass, vocals), Iseult Ní hUaithne (Fiddle), Siofra Ni Chasaide (Flute, vocals), Eoin Conraí (Djembe), Ruairi Ó Casaide, (Uileann pipes, Bouzouki), Oisin Conrai (Guitar, Banjo), Éanna Ó’Casaide (Uileann pipes, Piano).