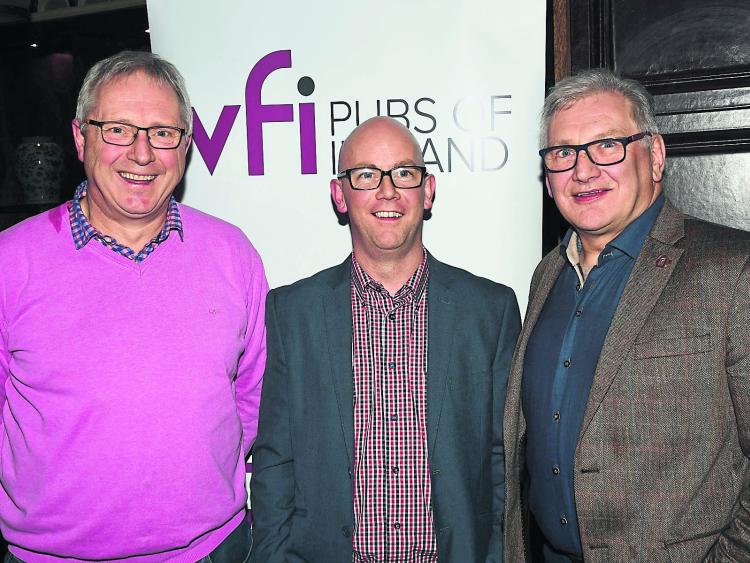 Everyone loves their local publican and it’s good to report that the licensed trade in Kilkenny is holding its own.
On Tuesday of last week, city and county publicans got together to fete those who won awards in 2019 and to remember those on whom God recently called time.
Anthony Morrison, who is the Chairman of the Kilkenny Vintners’ Federation of Ireland (VFI) branch and Padraic McCann, President of the VFI were on hand to meet people as they arrived to the event in Langton’s on John Street.
“Kilkenny is the envy of all counties when it comes to it pubs and hotels,” Mr Morrison said.
“We have a standard of excellence that is used as the benchmark for other counties,” he added.
“In 2019, Kilkenny had four regional winners in the Irish pub awards, two national winners and of course it also had the pub of the year, a good haul for any county.
“With the news that Kilkenny won the cleanest city in the IBAL awards, it highlights the continued effort made by all businesses and the Keep Kilkenny Beautiful (KKB) committee to make sure Kilkenny is the number one destination in Ireland,” he said.
The event was tinged with sadness as three great publicans who passed away recently were remembered.
Tom Stephenson, who owned and ran three pubs in Kilkenny: The Harvester (Danesfort); The Rhu Glenn (Slieverue) and The Arch Tavern (John Street) was remembered as was Jim Connolly of Connolly’s of Dunbell who was buried in the last few weeks. Anthony’s late father, Christy Morrison of Christy’s on Patrick Street was also recalled.
Mr Morrison made a presentation to one of Kilkrnny’s kindest publicans, Kieran Bollard of Bollard’s of Kieran Street who has retired from the trade
VFI president, Padraic McCann, expressed delight at the number of award entries in this year’s competition and congratulated all the Kilkenny winners.
“Paris Texas and all the other Kilkenny winners and finalists represent the very best in Irish pubs around the country.
“Irish pubs are the hub of any community – a warm destination to meet friends where you can enjoy good food and drink, music and entertainment and where tourists can mingle with locals to experience an Irish atmosphere at its best,” he added.
“The awards reflect the high quality of our pubs and and their importance as community centres.”
Award winners
National Pub Of The Year, Paris Texas, high Street, Kilkenny (Pat Crotty); Innovative Pub of the Year, Paris Texas, Kilkenny; Best Tourist Pub, Malzard’s of Stoneyford (Fred Malzard); Best Outdoor Space South East Region Winner, Christy’s Bar, Patrick Street, Kilkenny (Anthony Morrison); Best Music Pub in the South East Region winner, Matt the Miller’s, John’s Bridge, Kilkenny (Brendan Treacy).