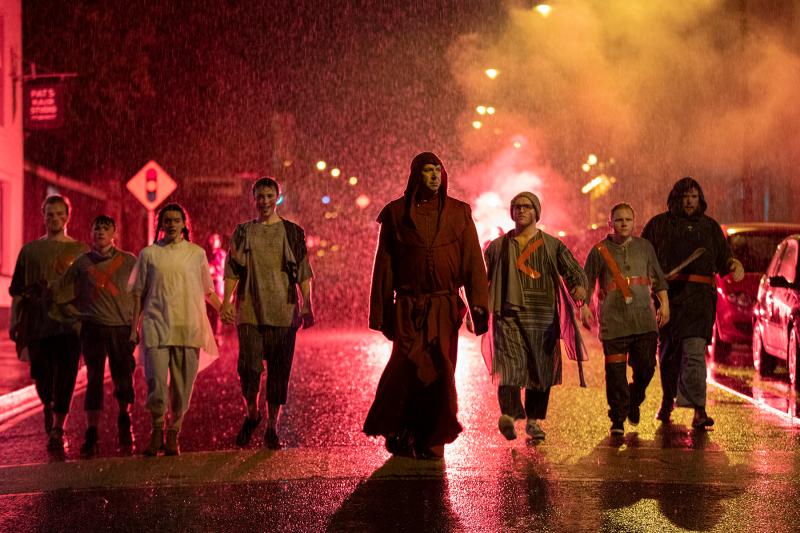 The shortlist for the Irish Times Irish Theatre Awards have been announced and Kilkenny Arts Festival has been nominated in 7 different categories. Out of a total of 815 individual performances on stages, down lanes in small towns, on beaches, in deserted factories, the Theatre Award Judges selected two of Kilkenny Arts Festival’s co-productions - Rough Magic’s Much Ado About Nothing and Asylum Production’s The Big Chapel X, for 7 awards. Out of the 815 shows, the nominations represent only 16 of those.

The Big Chapel X is based on Thomas Kilroy’s Booker-nominated novel The Big Chapel and is a fictionalised re-telling of the real events surrounding the internationally notorious Callan Schools’ Affair. The book was adapted by John Morton, Medb Lambert and Donal Gallagher.

The radical adaptation saw the people of Callan retelling their own story, exploring the past to re-imagine the future, using the town of Callan as its stage. Supported by a team of professional theatre artists, The Big Chapel X was a large-scale, inclusive, participative, multi-disciplinary community engagement project with talks, workshops, events, podcasts and community gatherings, culminating in the large-scale promenade theatre production.

The show was nominated for: Best Production; Best Ensemble; Best Lighting Design (Paul Keogan) and was nominated for the Judges’ Special Award - The Communities of Callan, Limerick and Mullingar For their support and involvement in the creation of theatre pieces that address painful local histories, via The Big Chapel X by Asylum Productions, Kilkenny Arts Festival and The Abbey Theatre; Bread Not Profits about the Limerick Soviet by Gúna Nua; and The Valley of the Squinting Windows from the novel by Brinsley MacNamara.

After 2018’s Irish Times Theatre award-winning production of A Midsummer Night’s Dream, Rough Magic returned to Kilkenny with a vivid contemporary staging of Shakespeare's celebrated screwball comedy Much Ado About Nothing, adapted by Nathan O’Donnell and Ronan Phelan.

Festival Director, Olga Barry said “Kilkenny Arts Festival couldn’t be more pleased to be associated with seven nominations for the Irish Times Irish Theatre Awards. These nominations show the positive and crucial role our National Festivals can play in supporting the making of original, challenging and relevant theatre in a modern world.

"Asylum Productions/The Big Chapel X production was an extraordinary experience for audiences, which was deeply rooted in a sense of place and of a community telling its own history, in their own unique way. Our regular partners, Rough Magic Theatre Company, made a riotous, hilarious and contemporary version of Shakespeare’s ‘Much Ado about Nothing’ which celebrated the Irish accent and challenged us to consider the roles of gender and power through riveting drama. We’re simply thrilled to see both productions recognised nationally for their work here at Kilkenny Arts Festival”.