Duck under the archway and just on the right, Petronella has become a regular for those who have discovered her 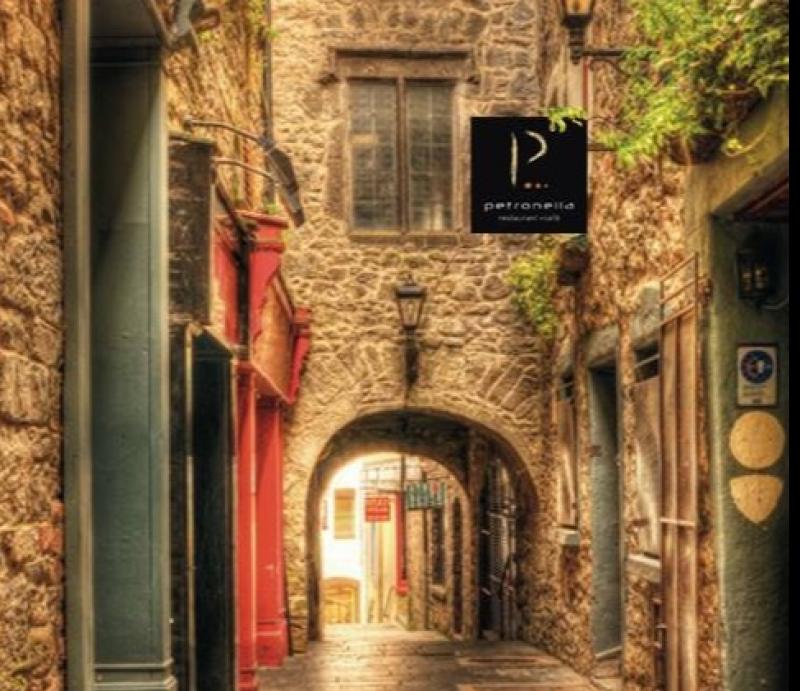 Petronella, on the Butter Slip

From wherever you are standing on the High Street in Kilkenny, a few minutes walk will get you to the most famous of all the slips - the Butterslip Lane - and to Petronella Restaurant-Cafe.

Over 400 years ago horse drawn carriages trundled down this thoroughfare. The charming slip with its pretty name is steeped in history and worn with footfall and remains so today. Duck under the archway and just on the right Petronella has become a regular for those who have discovered her. Facebook and Tripadvisor entries already bear testament to culinary experiences from both near and far.

Petronella accommodates 50 customers. Situated over two floors, a specially commissioned impression by local artist Brock Butler of the figure herself hangs in the stairwell and is already becoming used to the photographs.

Whatever the season and whatever your taste and however much time you have to spend, both the menu and the layout are tailored to suit. Tables are thoughtfully spaced and many have remarked on how easy it is to dine alone if preferred but few can figure out why.

Window seats upstairs draw the eye to the timelessness of the lane below. Original stone walls and overhead beams draw comments all of the time and the romance and ambience are pulled together in the specially chosen background music. Petronella is easy to drop in to but harder to leave.

The cornerstone of the culinary experience is in the welcoming and attentive staff and the individuality of the customer. Requests and enquiries from diners form part of the spirit of a collective dining experience. Petronella’s doors open at noon with lunches until 3pm, late lunch on Fridays and Saturdays til 4pm, followed by those who drop in for coffee and tea until 5pm when the Dinner Menu and A la Carte Menu begins, with last orders at 9pm from Monday to Thursday and 9.30pm on Friday and Saturday.

Throughout the day all of the menus draw on our chefs wealth of experience and the personal touch of the owner whose daily presence and past years spent in the restaurant business and no less in the area of tourism, continue to be relied on. Already customers have remarked on ‘the delicious tea and house biscuits’. The chef's modern approaches to current demands such as the individualized nature of for example a gluten free or vegetarian menu are now part of the evening experience.

Petronella is already warming to the coffee concerts and other musical events planned for the months to come. Locals pride in their interest in sharing their knowledge about Petronella becomes apparent when they come to dine.

Petronella Restaurant-Café looks forward to always dipping into the archives on her namesake remarkable history as the first woman to be burnt at the stake in Europe. Situated around the corner from where Petronella met her end is where you are invited to dine and where new histories will begin.