Gardaí 'very satisfied' with Kilkenny compliance, but five cases before the courts

'It is very clear that the people of Kilkenny are taking this very seriously', says Superintendent 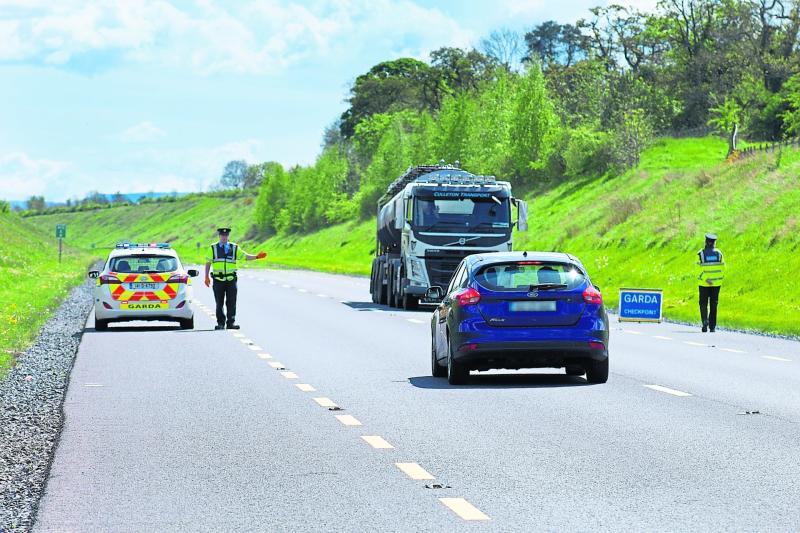 Gardaí stationed at the checkpoint in Templemartin on the first day of Operation Fanacht yesterday (Tuesday) Picture: Oisin Keyes

Gardaí in Kilkenny say the vast majority of people here are abiding by Covid-19 restrictions, with a major checkpoint operation under way from yesterday (Tuesday) morning.

Nonetheless, five people are before the courts having breached restrictions in recent days. Superintendent Derek Hughes told the Kilkenny People that gardaí are out in numbers operating compliance checkpoints under Operation Fanacht in the run up to the bank holiday weekend. The Superintendent added that he was ‘very satisfied’ with the levels of compliance in Kilkenny with legislation governing journeys outside the home.

“It is very clear that the people of Kilkenny are taking this very seriously,” he said.

“There will always be those who pull in the opposite direction and we currently have five cases before the District Court for breaches of the Health (Preservation and Protection and other Emergency Measures in the Public Interest) Act 2020.”

NATIONALLY
Nationally, Gardaí say they continue to experience a high level of compliance with the public health guidelines at the many checkpoints and high visibility patrols. throughout the country. Members of An Garda Síochána have interacted with hundreds of thousands of people, and the vast majority were adhering to the public health guidelines.

In a small number of cases, despite receiving a number of warnings, some individuals did not adhere to the guidelines and the regulations were used under the Health Act 1947- Section 31A- Temporary Restrictions (Covid19) Regulations 2020.

From April 8, which was when the regulations came into effect, until April 25 inclusive, Gardaí invoked the regulations 76 times. A Garda statement issued yesterday (Tuesday) said that of the 76 incidents, two were as a result of an instruction from a relevant medical professional as per the Act.

As per Garda policy in relation to the regulations, in all cases where arrests were made under the regulations, members of An Garda Síochána consulted with the Director of Public Prosecutions on the decision to charge.

“This is an important week for the country in challenging Covid-19.

"Unfortunately, there are people who did not adhere to the guidelines and members of An Garda Síochána had no option but to use the regulations or other legislation. It should be stressed though that this is a tiny proportion of the people we have engaged with over this time.

From April 8 until April 25, there were 31 incidents of spitting and/or coughing against members of An Garda Síochána. In the same period, garda members had to use anti-spit guards 15 times.

OTHER POWERS USED
In addition, pre-existing enforcement powers were used in 760 incidents where other offences were highlighted in the course of Covid-19 operations. These range from incidents such as from drink driving detected at checkpoints, to drugs seizures to public order offences.