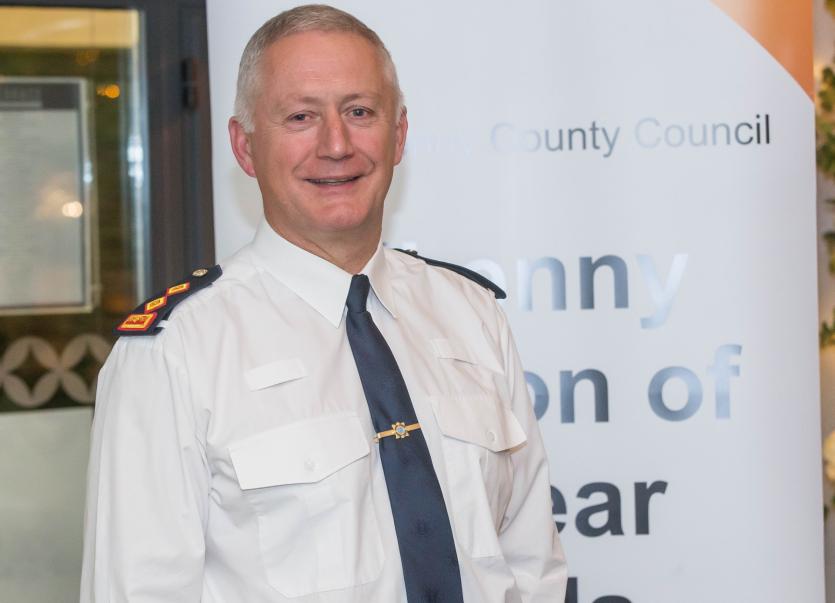 Chief Superintendent Dominic Hayes is a familiar face on the streets of Kilkenny.
The popular garda chief will retire at the end of the month and his absence will be felt.
Approachable, unassuming and with a genuine empathy for the community he serves, Chief Supt Hayes greatly enhanced community engagement in the garda division of Carlow and Kilkenny and his actions saw crime fall dramatically across the city and county.
During his time in charge of the district he was instrumental in setting up a number of high profile garda operations including Operation Thor which was rolled out nationwide and is highly successful in disrupting criminal activity.
The high profile garda operation which has a number of different pillars including community engagement and crime prevention was devised in Kilkenny.
Chief Supt Hayes took up the post in 2015 and he has seen a massive reduction in the level of crime in the past five years. He is pro-arrest, pro-charge and pro-curfew and these measures have made a real and lasting difference resulting in Kilkenny becoming a safer place to live, work and socialise in. Implementing curfews, charging suspects and bringing them before the courts has helped to keep Kilkenny safe. He has also continued to make road safety a top priority in the garda division.
“I have a zero tolerance attitude to crime, especially with prolific offenders,” he said.
“When I came here first, there were 1,100 burglaries a year and now there are less than 400. The number of assaults has also dropped significantly which makes people feel safer.”
Figures reveal a significant reduction in assaults from 73 in 2017 to 54 in 2018 and 48 in 2019.
Another impressive project rolled out by Chief Supt Hayes has been the mapping of community text alert schemes across Kilkenny and Carlow.
He is passionate about the relationship with the local community and gardaí and has visited halls in every village and town to get the message out there that the gardaí are reliant on the community and vice versa.
“This mapping model was the first time it was done in the country and it was a great success,” he said. “I have really enjoyed going out into the community halls and meeting people and listening to their concerns and addressing them.”
The text alert mapping has been highly effective and there are now text alert groups across the county which are invaluable in increasing public awareness around crime prevention.
Visible policing with gardaí out on the beat is another one of Chief Supt’s Hayes’ hallmarks and he has led by example - often out and about listening to the community he serves.
“We have put gardaí back into villages like Ballyhale, Freshford and Kilmoganny and we have a dedicated community policing team.”
Chief Supt Hayes was also involved in the setting up Kilkenny Cares - a group which aimed to foster community spirit and help to reduce crime.
Operation CitySafe, which was launched in 2018, has been a resounding success. It is a public safety and harm reduction strategy and involves posting gardaí at known hotspots.
There are several other operations including Operation Homesafe which was a crime prevention initiative which reduced burglaries across Kilkenny.
He is a people’s person and quick to acknowledge the good work both of his peers and colleagues with an Annual Garda Awards and also he also helped set up the Garda Youth Awards which celebrates the outstanding contribution of young people in the community.
His strong community engagement ethos was publicly recognised when he received a Kilkenny People of the Year award in 2018.
The Tipperary man was also responsible for setting up policing partnerships across the county. Members of An Garda Síochána, local interest groups, elected representative and representatives from the relevant text alert schemes are all involved in the partnerships which have started up in the Castlecomer and Piltown areas of the county and there are plans for further partnerships to be launched.
Kilkenny is undoubtedly progressive from a policing perspective and now is home to a Divisional Victim and Community Engagement Office and a Divisional Protective Services Unit, which tackles serious sexual crimes, including rape, abuse of children and vulnerable people, and online exploitation.
Chief Supt Hayes has a wealth of experience in solving crime and has investigated some of the country’s most heinous murders. In Kilkenny he has been instrumental in reviewing longstanding murders including the murders of Ann Nancy Smyth, Gerry Nolan and Marie Tierney. There was a successful prosecution in the Ann Nancy Smyth case and John Joe Malone was convicted of her murder.
Superintendent Derek Hughes commented on the retirement, telling the Kilkenny People that Chief Supt Hayes has been a very dynamic leader in An Garda Síochána achieving outstanding reductions in crime and increased community engagement in the five years he has led An Garda Síochána in Kilkenny and Carlow.
“Currently the division has some of the lowest crime rates in the country and these results are down to Chief Hayes’ initiative, management and tireless interest in keeping people safe,” he said. “Chief Hayes leaves Kilkenny in an excellent place which is a testament to his career in An Garda Síochána.”
Chairman of the Joint Policing Committee, Cllr Pat Fitzpatrick paid tribute to his colleague and commended him on the trojan contribution he has made to Kilkenny.
“Dominic built up a huge degree of respect with communities in Kilkenny,” he said. “I have sat in many parish halls with him over the past number of years on cold winter nights where he gave hours of engagement to the public discussing their concerns and implementing strategies to assist in tackling crime. He was never found wanting when it came to being on the ground supporting communities.”

Chief Superintendent Hayes has 35 years of service and passed out of Templemore Garda Station in 1985. His first post was at the Bridewell Garda Station which he describes as ‘a learning experience’.
He served in the Central Detective Unit and was in the detective branch and cut his teeth in the T-Squad, the garda surveillance unit that was set up to monitor one of the country’s most feared criminals, Martin Cahill in the 1980s.
He has also worked with the National Bureau of Criminal Investigation, the Central Detective Unit, the Anti-Racketeering Unit and was involved in setting up the Organised Crime Unit.
During his time with the National Bureau of Criminal Investigation he was involved in a number of high profile murders across the country including the murders of Rachel O’Reilly, Sophie Toscan du Plantier and the Inisboffin murders.
“I have thoroughly enjoyed my career in An Garda Síochana. The Covid-19 pandemic has brought perspective and shows the importance of connection and community.
“The highlight of my career has been working here in Kilkenny for the past five years as the chief and meeting with the people and listening to their concerns and making them feel safe,” he said.
“I am very proud of all the staff that I have worked with and want to acknowledge their skill, commitment and professionalism and thank them. I also want to thank all the agencies I worked alongside for their help and support.”
However there is a tinge of sadness and regret that when he moves onto the next chapter Kilkenny will be left without a chief superintendent.
“Under the new policing model that is currently being implemented there will no longer be a chief superintendent based in Kilkenny. I had argued that Kilkenny would be the most central location and I am disappointed that this did not happen as I close the door.”