Price change in this Kilkenny City carpark from Tuesday 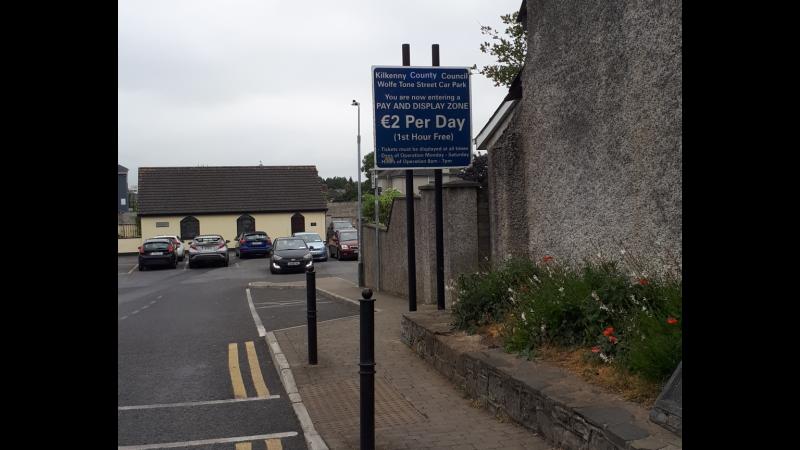 The Wolfe Tone Street carpark, where a new pricing regime is due to come into effect

A new system of charging is to be brought in for the Wolfe Tone Street carpark (at the back of Billy Byrne’s and Guineys) in a bid to stop people leaving their vehicles parked there all day.

A study carried out by the council shows that two in every three cars using it remain there all day. It’s mostly workers occupying the spaces, meaning almost none are available for people coming in to shop.

Local councillors have been calling for more supports for businesses in the John Street area, and it’s thought that encouraging greater turnover of parking spaces will help with this. The carpark is pay and display with the first hour free and a €2 daily rate, but that is about to change. From next Tuesday, June 22, patrons will be charged €1 for the first two hours, and €1 per hour thereafter, with a maximum daily charge of €5.

There are 122 spaces in the carpark, and at Friday’s meeting of Kilkenny City Muncipal District, city engineer Ian Gardiner said it was generally pretty full throughout much of the day. On a weekday, the average number of vehicles using it is 291, while on a Saturday it is around 230.

“Two thirds [of spaces] are full throughout the day and so are not available,” he said.

Mr Gardiner said an optimal occupancy of spaces was about 80%, so that people continue to go to the carpark assuming they will get a space, and not avoid it thinking that it is always full – or queuing out on to the road for a space.

“Wolfe Tone Street is operating at less than half the turnover of John’s Green and Market Yard carparks,”Mr Gardiner concluded.

"It operates primarily as a ‘long stay’ carpark.” He said a new charging regime would benefit businesses in the area.

Councillors welcomed the move as a measure to increase space turnover and help businesses, but said the council must be mindful of the impact on people working in the city.

Cllr Eugene McGuinness said he had raised the matter on a number of occasions.

“People are staying all day and it doesn't do anything for the businesses on John Street,” he said.

The independent councillor added that not everyone could afford parking, and it would have to be made clear there were other long-stay options available nearby.

Cllr Andrew McGuinness said it had been an ongoing issue, and this was about helping traders. His party colleague Joe Malone agreed, and said it was to benefit the shoppers and business on John Street.

Cllr David Fitzgerald said he also shopped in the area, albeit apparently at a different time to Cllr Malone. He said there was a wider parking issue to address.

“Part of the reason the carpark is used all day long is there is a shortage of parking spaces for workers in the city,” he said.

“Hopefully, the new bus service will help but most workers are coming from outside the city. It is something we need to address. If we want to keep the city alive, we cannot penalise workers.”

He suggested an approach be made to the owners of the former mart site, asking them to consider allowing temporary parking on the site if nothing was currently happening. Mayor John Coonan seconded this.

Mr Gardiner said the executive would be coming back to the members with a full report on parking in the city, which had been put on hold during Covid lockdown.