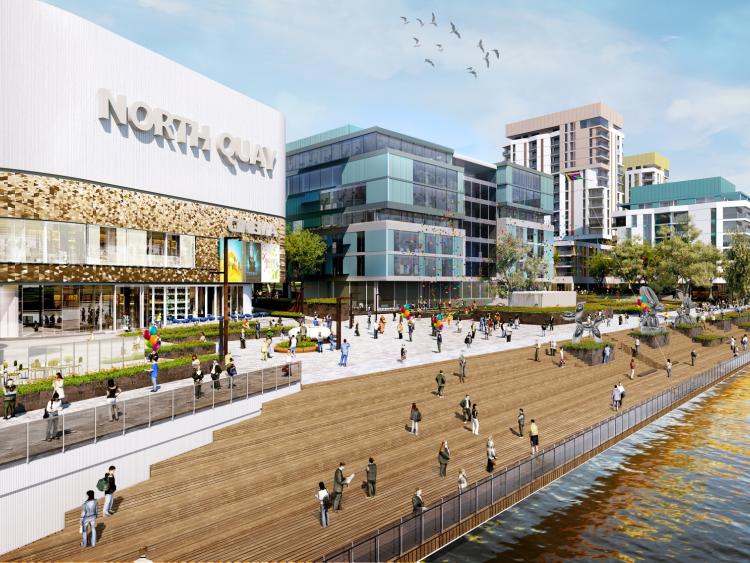 Planning permission has been granted for the Waterford North Quays Strategic Development Zone, the €500 million Ferrybank project which has been put forwards as a game-changer for the South-east region.

Waterford North Quays is a project of Falcon Real Estate Development Ireland, which says it will be central to unlocking the potential of the communities of Waterford and the South East and delivering a better quality of life for all. Falcon issued a statement this morning saying it had received planning from Waterford City and County Council.

“We are delighted at the decision of Waterford City and County Council to grant full planning permission for the North Quays SDZ Project.  This is the culmination of four years of hard work with a significant effort made by many but particularly, the community and stakeholders of Waterford and the South East itself.” said Rob Cass, Director, Falcon Real Estate Development Limited.

North Quays is over eight hectares of urban regeneration on a stunning, south-facing 1km historic quayside waterfront in the centre of Waterford City. The site consists of a sustainable transport hub, will be the largest mixed-use real estate development in the South East of Ireland’s €18bn economy for the 603,000 people living in the South East’s 60-minute catchment.

“The North Quays redefines a new and exciting vision for the city, supporting and enhances a vibrant public realm and kicks off a very exciting decade ahead for Waterford and the South East region as the delivery of North Quays sees the potential of the city-region start to be unlocked, as a destination for people across Ireland and beyond to come and experience," said Mr Cass.

Highlights
The project description is a mixed-use development, and according to Falcon Real Estate Development, is to include:

- Five residential buildings ranging in height from 7 to 17 storeys, with 298 riverside apartments to accommodate 500 to 600 residents, with value of apartments 50% better value than Dublin prime apartments.

- The location of one of Ireland’s most modern and multi-nodal sustainable transport hubs, acting as new model for Ireland with a new train station, bus interchange & greenway hub for the 100km South East Greenway connecting nearby communities via dedicated bike routes, plus connecting to the South Quays & City Centre via a Sustainable Transport Bridge.

-  Visitors will be able to enjoy quality waterfront restaurants and rooftop bars & cafés with over 30,000 square metres of green open space and a riverside promenade for full access to the quayside with unprecedented in Ireland quality of finishes.

- The development is built to BREEAM Gold standard and is 100% renewable energy, which in turn has been designed to be owned by Community Energy Co-op's.

- As a sign of confidence in the Development from Commercial Partners, the project has been commercially progressed that sees 50% of the apartments sold, 50% of the offices sold and the Hotel pre-sold.