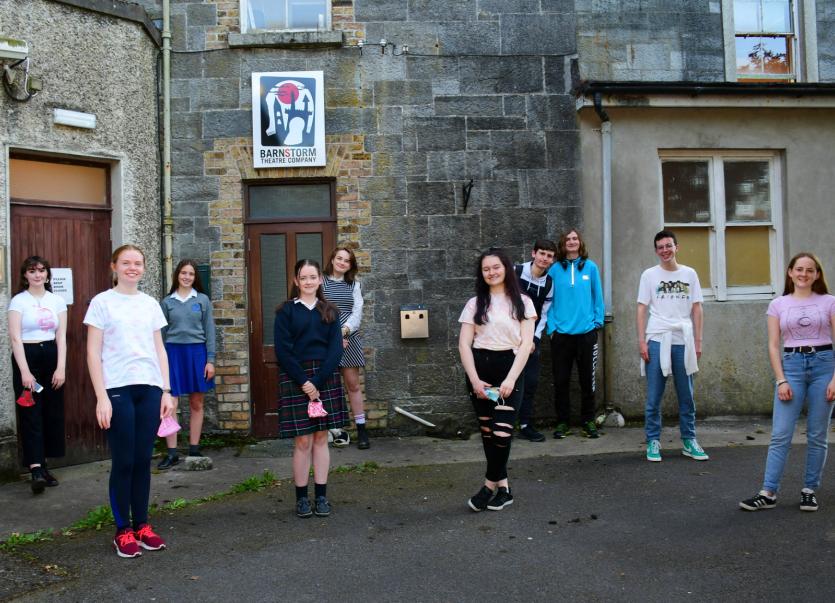 The Covid-19 pandemic has impacted massively on the arts locally, nationally and internationally and arts organisations are using creative and innovative ways to face numerous challenges.
Barnstorm Theatre Company, which has been located in Church Lane in Kilkenny City is getting used to the new normal and is busy with rehearsals for an upcoming production and its youth theatre has resumed in recent weeks.
Founded in Kilkenny in 1991, Barnstorm Theatre Company creates and presents quality theatre for, and with children, young people and adults.
However the iconic organisation is facing its biggest challenge yet as it urgently needs a new home.
“We are back in the office now planning for the future – as well as where we will operate from in November, when we are due to leave the building that we have been operating out of for the past 25 years. We are also exploring how we can creatively rise to the challenges facing theatre and the wider arts and particularly for Barnstorm in Kilkenny,” said Artistic Director, Philip Hardy
The theatre company has adapted to the changing times and recently partnered with the Barn Owl Players, a Kilkenny-based adult amateur drama group in their virtual production called Zoom BOP.
Zoom BOP was a nine-week project exploring the art of the monologue whereby participants are encouraged to write their own pieces based around the idea of confinement.
Writers, including Maeve Ingoldsby and John Morton mentored the participants who performed the pieces on Zoom and it was launched on YouTube in September and is presently playing weekly on KCLR’s Sue Nunn Show.
Barnstorm have also participated in the Arts Council/Creative Ireland ongoing Creative Schools pilot Spotlight Project and is one of six national arts organisations identified for its quality provision for children and teachers with our Theatre for Young Audiences.
“We are presenting the first module on the creation of The Messenger by Mike Kenny which was commissioned in response to the Year of Commemoration in 2016. Schools will have access to Barnstorm’s practice from page to stage and the enhancement programme that was developed to accompany the production by Ann Murtagh and Anna Galligan,” added Mr Hardy.
Spotlight will be launched in September and if successful we will produce further modules on theatre-making.
Rehearsals are also underway for the annual Curriculum Play Live in partnership with the Watergate Theatre .
Philadelphia Here I Come by Brian Friel went into rehearsal in early September and the production is due to happen at the end of November. Rehearsals are taking place both through Zoom and in a specially designed rehearsal studio.
“With the uncertainty of gatherings in theatre etc we will approach this year’s production with an exciting exposé on the making of the production – for students in Leaving Cert they will see the process from page to stage with everything filmed and recorded from auditions to rehearsals to design to production. Hopefully the performance will take place in the Watergate Theatre but, if not, it will postponed to a later date,” said Mr Hardy,
Local film-maker Emily McGee, an alumnus of Kilkenny Youth Theatre, has been engaged to record, edit and create a film of the total process.
Barnstorm has also been working on a new commission from Shane O’Reilly for production next Spring. Swan Song is a beautiful new work that explores ageing and the correlation between the young and the old – Childhood and Second Childhood). The production will use music as a narrative in the telling of the story of an elderly cellist musician who is preparing for the end when he meets a young boy who has run away from home with his violin on his back.
The two characters encounter each other in a clearing of a wood both sharing disillusionment and a sense of powerlessness in a disposable society that can be rigid to those who ‘do not fit in’. The play will be presented for an audience of 5-10-year olds.
“We are looking at both a way of presenting the production to our audiences and the space that becomes the theatre – this could be the school hall, or a geo-dome / tent in a park or a wood,” explained Mr Hardy.
Meanwhile the Youth Theatre groupswere working on Zoom with Anna Galligan and Orla McGovern in a new and exciting process of running theatre workshops in isolation during the summer and are now back attending socially-distanced workshops.
“These are a few of the projects that we will aspire to present and there are others that will arise as we support other freelance artists in our community to develop their practice and/or present their work. And all while we move out of our home of 25 years with the uncertainty of new home for the future.” he added Mr Hardy.