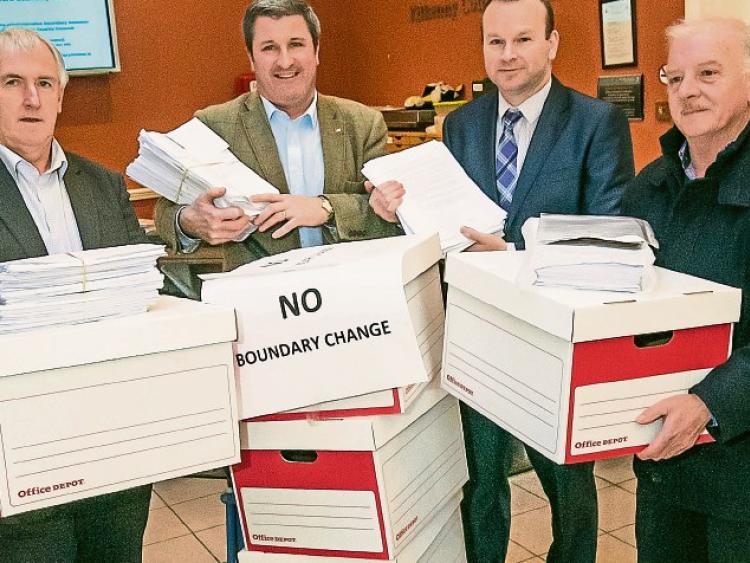 Kilkenny councillors were shocked and disappointed to learn of a fresh attempt to reignite a debate over the boundary between Waterford and South Kilkenny this week.

On Tuesday, the Kilkenny People reported that a Waterford councillor intends to seek the support of his colleagues when raising the matter at an upcoming meeting of Waterford City and County Council. South Kilkenny counterparts were unequivocal in their response at the Piltown Municipal District yesterday.

The five members were incredulous the issue would be brought up again after the scale of anger and opposition in 2016/17, as well as the public money spent on the divisive process. All expressed hope that their Waterford counterparts would not pursue the issue, given their success in working together on projects such as the Ferrybank Neighbourhood Park and the greenway.

Piltown area chair Cllr Eamon Aylward (FF) said the it was 'with horror' he had seen the issue raised again.

“Hopefully, they will see sense and not pursue it this time,” he said.

“We all know the time, effort and money wasted on it the last time. We have a good system of cooperation here now, and stuff shouldn't go on to upset that. I think we are all in agreement this should be knocked on its head.

Labour Party councillor Tomas Breathnach agreed, and said it was particularly important at a time when there were so many projects coming together.

“It is the time for cooperation between the two local authorities,” he said. “In fact, you could argue that one of the reasons we've been so successful in recent times has been that level of cooperation.”

Cllr Pat Dunphy (FG) said it was 'disappointing' to hear the matter being raised again, but noted no decision had been made yet. He hoped Waterford the right thing was done in the spirit of cooperation.

“There's a lot of good people in Waterford that will have seen that before and the amount of taxpayers' money that was wasted making that case, fighting that case, when it is all simply down to cooperation. It's the only way forward," he said.

Cllr Dunphy said there had been a legislative change since the last review in 2016/17. He was referring to a 2019 amendment to Part V of the Local Govt Act 1991, which sets out that a Minister can no longer make an order in response to a proposal to amend a county boundary in a case where the impacted local authority 'disagrees in a material respect with the terms of the proposal'.

Cllr Ger Frisby (FF) said it was 'absolutely ludicrous' to even moot the issue again.

"It's been put to bed, the Minister has made decision on it," he said.

"You're only going to be opening a can of worms right across the country, at a time that such big projects are happening in this area – the North Quays, the greenway, all the projects in Ferrybank. They're all joined projects and all require communication and cooperation between both authorities. I think this type of talk needs to be knocked on its head for once and for all.

"Waterford have enough to do in their own particular area to develop – there's five areas within the city that still need to reach their full potential. While we are the south of the county we are extremely proud of this part of the world, and will defend it to the end. It just has to stop."