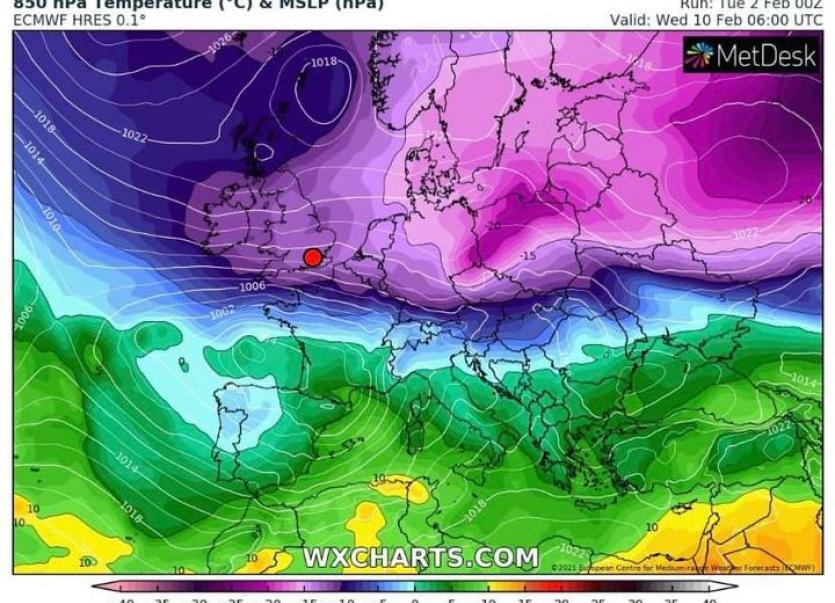 A forecaster is warning that a severe cold outbreak is looking 'increasingly likely' in the coming days.

In a post on Ireland's Weather Channel, forecaster Cathal Nolan states that the latest weather models issued on Wednesday morning continue to show the risk of a spell of 'particularly cold weather' on the cards developing this coming weekend but peaking into the early days of next week.

Very cold air, which originated over Siberia, is making its way westwards across the cold continent and potentially enveloping Ireland also.

"In such a situation moderate to heavy falls of snow would be likely along the east coast and through the East Midlands in particular, as well as some areas of south Ulster and east Munster," he says although he adds that at this early stage it’s too difficult to pin point exactly where is likely to see the heaviest snow, or at what depth such falls may reach. He does add that this potential weather 'is something to be aware of'.

The forecast continues that day time temperatures during such a cold outbreak would struggle to rise above -1 or -2 in many areas away from the coasts, with night time values approaching -10 where winds fall light and where snow persists on the ground.

However the forecast continues, "the great uncertainty at the moment however is with regards to the duration of this particular cold spell. Typically such pressure patterns can last for a period of weeks, however the model guidance at present indicates a battleground scenario remaining place, whereby misled Atlantic air may try to dislodge the colder air, leading to the risk of more persistent snow for a time in the south and southwest."

Further updates will be issued on Ireland's Weather Channel throughout the week. See more below

In it's forecast, Met Eireann states that  Ireland will have below average temperatures next from Friday adding that with the strong easterly flow, wind-chill will be a big factor. It adds that ome wintry precipitation is likely, especially in the north and east. Widespread frosts at night, with hazardous conditions where ice forms.

Other forecasters are also forecasting a cold spell on the way in the coming days.