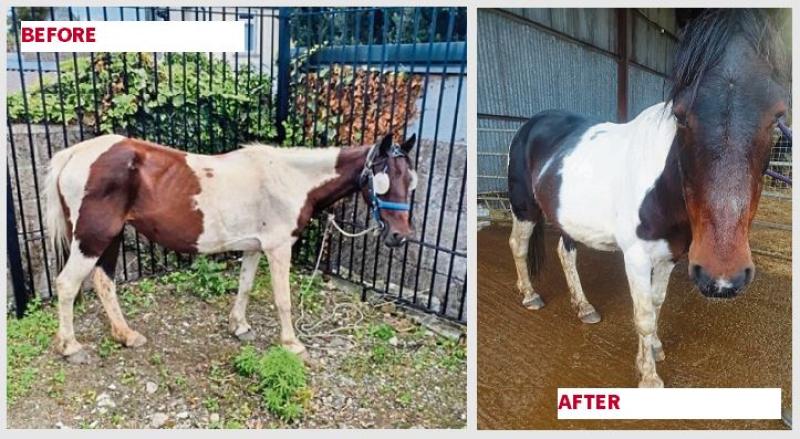 Concerns over horse welfare have been raised in Kilkenny for many years but a multi-agency approach is now achieving real results and 15 horses have found a new and safe home with a rescue charity in recent months.
Trojan efforts have been made between the local authority, the gardaí and animal rescues to bring about real change and several horses and been rescued in recent months by the charity My Lovely Horse Rescue (MLHR).
Cathaoirleach of Kilkenny County Council, Cllr Andrew McGuinness is also a strong advocate for animal welfare and horse free zones banning sulkies from the city’s streets are expected to come into effect over the coming weeks.
Praise
Gardaí have been instrumental in tackling the issue and Deborah Kenny, the founder of MLHR is full of praise for local gardaí.
“Last month a pony was seized by gardaí following an incident with a sulkie on the Ring Road. The gardaí contacted us and animal, who was renamed ‘Garda Berty’ is now in the care of the rescue and is adapting well to its new environment.
“Sadly horse neglect and abuse is a real issue in Kilkenny. Our work is to rescue and rehome these animals who are often in a terrible condition and to give them the care and attention that they need.
“The gardaí in Kilkenny have been amazing and we have a great working relationship with them,” said Deborah Kenny, who founded the rescue with her sister over 10 years ago.
“We would love to be able to have a rescue in Kilkenny.
Success Story
“One of our greatest success stories from last year was the rescue of Lydia and her foal Lyndon. When Lydia arrived here she was in such bad shape and was very underweight. We didn’t know whether we would lose her but she has gone from strength to strength and is the picture of health now,” she said.
Last September on beat patrol in Kilkenny gardaí came across the pony and became concerned for the animal’s welfare. After carrying out a cursory inspection this animal was seized under Section 12 of the 2013 Animal Welfare Act.
The gardaí walked the pony back to the station. Arrangements were then made between the Local Authority and My Lovely Horse Rescue. Now Lydia (the horse was named after her rescuer) is enjoying her new life.
Sergeant Lydia Burke told the Kilkenny People that An Garda Síochána Kilkenny, always have and will continue to, stand up for the rights of animals who have no voice, through enforcement of laws and with the great help of our friends and agencies such as My Lovely Horse Rescue.
For more information on how to help see mylovelyhorserescue.com