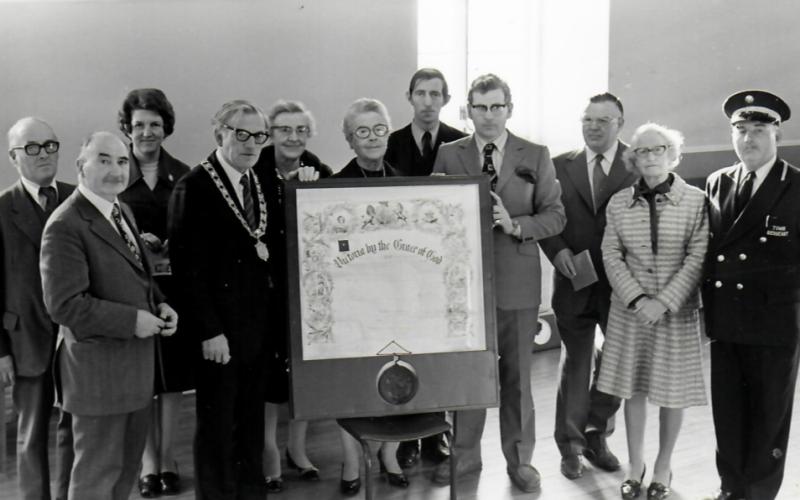 Do you recognise anyone in this picture?

The death occurred recently of Anthony Cains, founder member of the Institute for the Conservation of Historic and Artistic Works and a world-renowned book binder and conservator.

While most recently associated with Trinity College Dublin, that posting followed a worldwide career during which he once led a staff of 90 while serving as technical director of Conservation at the National Central Library of Florence, Italy.

It is opportune to recall his outstanding contribution to Kilkenny City’s heritage during the mid-seventies. The city was then being robustly promoted as the Medieval capital of Ireland and that image and marketing positioning was beginning to pay dividends.

CONCERNED
But Town Clerk, Peter Farrelly, was concerned that many very valuable charters in his control, some ranging back centuries, rested in the cold vaults in City Hall, a position which was not at all suitable, atmospherically for their long-term storage.

Also, facilities for their display was causing him alarm due to the growing number of visitors who were increasingly attracted to Kilkenny and occasioning the fragile charters to be unfolded and refolded. In particular the famed Liber Primus –the First Book of the corporation – was a worry. It is the oldest corporation minute book on this island, but was in a very poor state and not at all suitable for display.

He voiced his concerns to Pat Nolan, the newly appointed Tourism Development Officer for the South East Region. He in turn discussed the difficulty with his Bord Failte colleague, Doctor Peter Harbison, the noted archaeologist.

These discussions were to lead to a visit to the City Hall in June 1975 by Anthony Cains to inspect the charters and also the priceless Liber Primus. While the charters were ‘just’ stored in a less than a suitable manner, the Liber Primus was unfortunately falling asunder.

With Bord Failte/South East Tourism supplying the necessary, substantial funding, the decision to fully rebind and recover the early corporation minute book was made. Mr Cains undertook to appropriately treat, repair, restitch each folio and provide a new cover for the Liber Primus, a priceless document which records the proceedings of the corporation from AD1230, with some gaps, until 1537.

The original 14th Century leather was to be incorporated in the reworked and renewed cover. Needless to say, the conservation work involved was painstaking, lengthy and correspondingly expensive. Each of the velum folios had to be individually separated and treated. Some required repair due to tear damage and wear over the centuries. When this meticulous work was completed each folio was then carefully stitched back into their correct sequence and position.

Meanwhile South East Tourism had identified an Irish firm who were the leading supplier for acid free storage cases deemed suitable for the charters. These had the added advantage of allowing the charters to be viewed without the need for individual handling.

The following year, the great day came when in late March, these six specially commissioned boxes to both house and display the charters were ready for collection. The task of collecting them fell to Pat Nolan, who drove to Dublin and secured them without difficulty.

He carefully arranged them in the back of his car – shunning the cold boot for such a precious load. All that remained was to nip into Trinity College, collect the Liber Primus, restored and awaiting collection, and head home in triumph.

A HITCH
But then there was a hitch. It was not possible to gain access to Trinity as the car and he were firmly turned away by a TCD gateman not give to compromise. ‘Park it on the street somewhere’ was his less than helpful, dismissive recommendation.

Owing to the danger of theft, damage or other difficulty Mr Nolan was not inclined to take this course of risky action and instead sought a secure location within walking distance of Trinity College.

He approached Leinster House in nearby Kildare Street, hoping to secure the assistance of a Carlow/Kilkenny TD with a view to securing access to parking within the grounds. But the Dail was in recess. The predicament was explained to the Master of Arms and he was asked for help.

It may have been that he had a connection with, or perhaps just goodwill towards Kilkenny. Whatever the reason, he allowed the car into the car park in front of the Dail. There it remained safe until such time as it was possible to depart Dublin having retrieved the Libre Preimus Kilkenniensis from nearby TCD.

The helpful Master of Arms, when the car was pulling out of the Dail, remarked that in the interest of historical completeness Kilkenny should always acknowledge the fact that for a brief time the city’s charters were — in his words — ‘in the care, custody and control of the Master of Arms of Leinster House’.