Picture this! Developing the past puts new tone on Kilkenny history 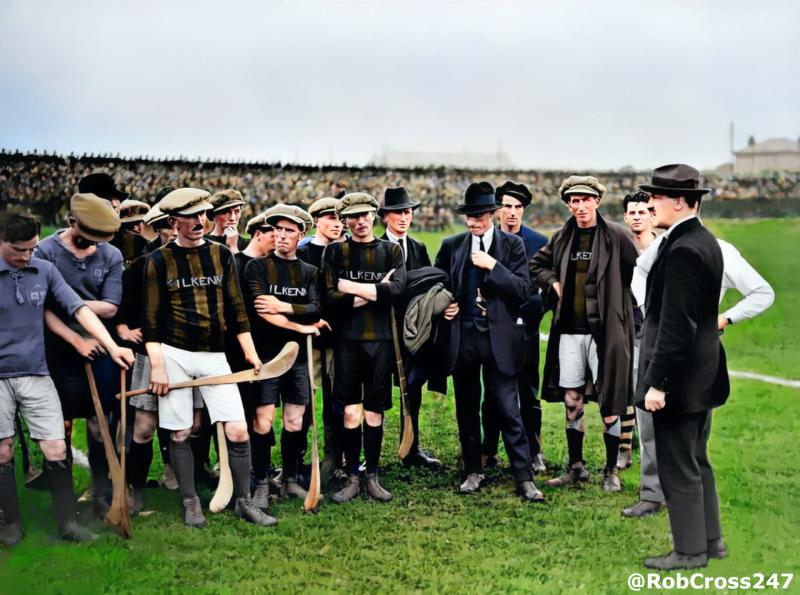 One man’s hobby has helped bring Ireland’s history to life.
For Rob Cross, a project has turned into an obsession as he sets about bringing the memories of the past into the present day.
“The pictures are one big puzzle of Ireland,” he said. “I’m hoping my work can help to fill in a few spots.”
For more than a year Cross, whose background is in architecture, has been hard at work restoring photographs of national interest.
From the Mansion House to Croke Park, the Rock of Cashel to Newgrange, the project – Bringing Ireland’s History to Life – has seen Cross use pictures from the national archives to show what the country was like more than a century ago.
“It started out as a project, but I’ve been colouring pictures from cities, towns and villages all over Ireland for more than a year,” he said. “I started with other parts of the country, like Listowel, Waterford, Cork and Limerick before concentrating on Kilkenny.” 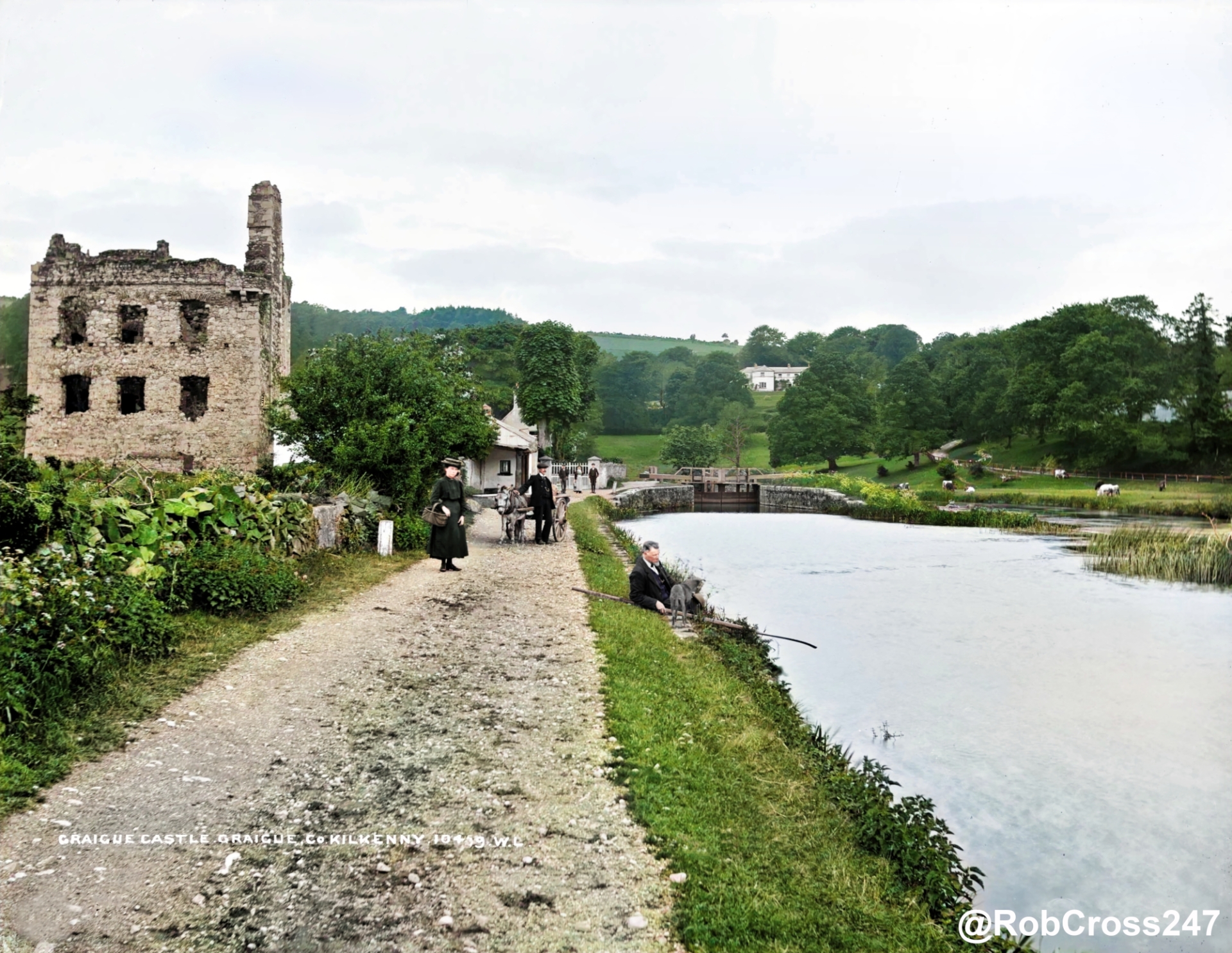 Cross came to local attention when his virtual tour took him to Kilkenny in recent days. His selection of photographs, which included images of the city and Graignamanagh countryside, were liked and shared by Kilkenny people at home and abroad.
“I have friends and family from Graignamanagh, so I’ve a soft spot for the place,” he said. “Some of the architecture about the place is so interesting. The older pictures show some of the investment that happened in the area – at the time money and taxes generated in Ireland were spent here rather than sent back to Britain – so you can see where they developed the Barrow trade by investing in the canal.
“With people in isolation or cocooning, putting the pictures on social media means they have a chance to share the images with family and friends,” he added. “It’s been a great way to start discussions among families and groups.”
And the responses were hugely positive, with so many people interacting to share their memories.

“The pictures have been a great way to learn about Ireland,” he added. “I’ve learned a lot on my travels through the country.”
The pictures, and the interest they have sparked, reinforced Cross’s belief that it could spark a regeneration for Graig and other similar places dotted throughout Ireland.
Rural revival
“Maybe the pictures could help get renewal projects up and running, maybe spark a revival in rural Ireland.”
That idea is something that could benefit from the country being in lockdown.
With people restricted to their locality through the pandemic, ideas could be formed through being immersed in their own townlands.
“Inspiration can come from hillwalks, or being on the greenways,” he said. “They show us how beautiful Ireland really is. The country is steeped in history, and the pictures and events shown in this series of photographs connects us all together.
“I would hope it helps people discover Ireland and its many hidden tourism treasures,” he added. “Doing that could help spread money throughout all parts of the country.”
For Cross the long-term goal is to produce a book from his series of photographs.
“I’ve been using pictures from the National Library Archive and publishing the finished works on social media,” he said. “It’s been a great way to get feedback from people and more information on people and places captured in the photographs.
“A lot of the detail is lost in the photos,” he said. “By adding colour and texture you can pick things up. Some of the pictures feature children or moving horses and carts – so they have an element of motion blur. I’ve also been able to zoom in on pictures and pick out new items.” 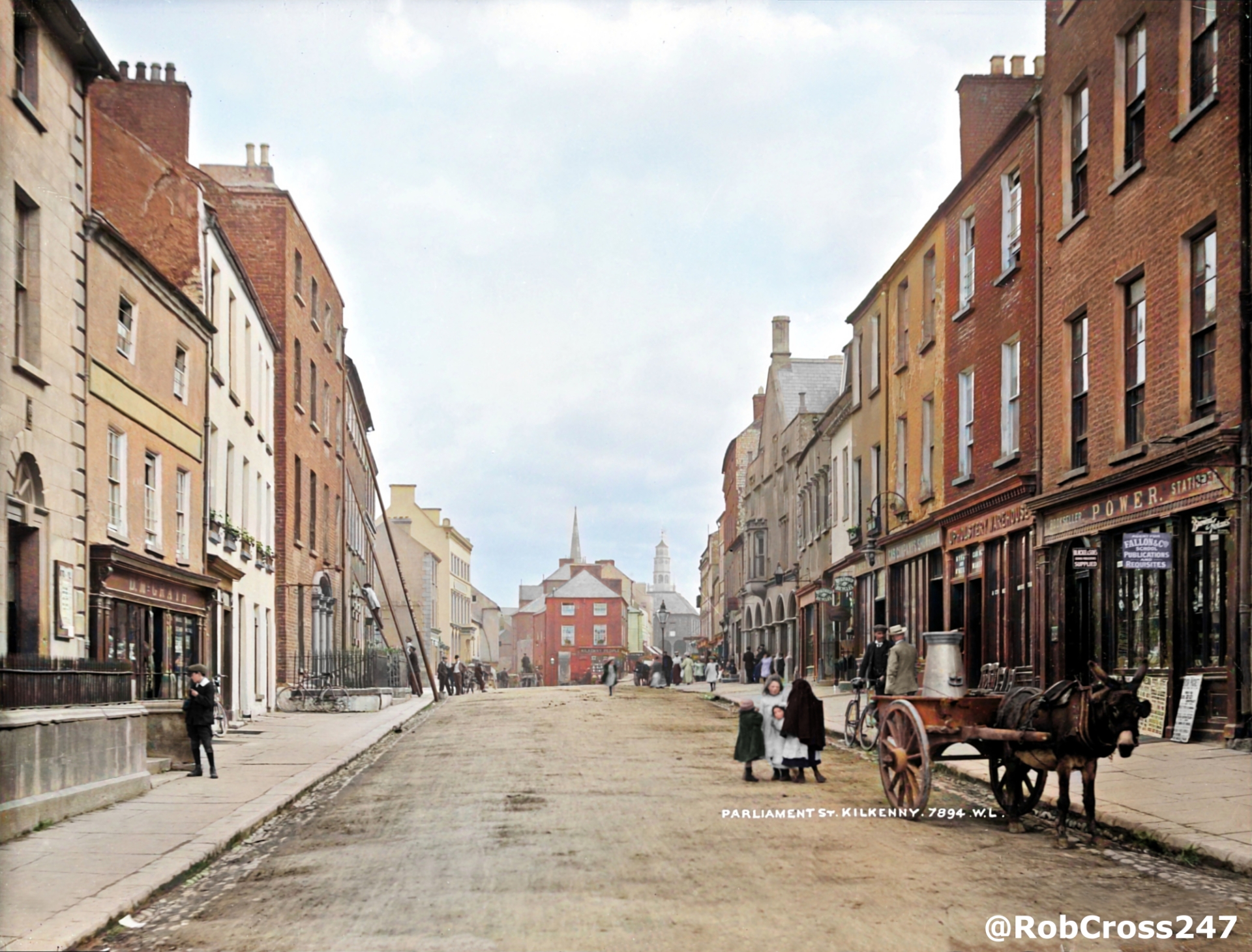 Working on pictures also gave Cross the chance to compare the changes that have gone on over the years.
“I’ve been able to use some of the pictures in a then and now style,” he said. “Once I’ve finished working on them, I’ve posted pictures along with current street views to show people the changes that have occurred.”
That element has led to Cross earning followers working in heritage projects, while also getting interactions from politicians and groups like An Taisce.
“Working in Dublin I’ve the destruction of the Georgian architecture which was prominent in the city more than 100 years ago,” he said. “They haven’t been instant; in a lot of cases the changes have come little by little, in some cases over a period of 30 or 40 years, so it’s like a ‘death by a 1,000 cuts’ approach.
Lost History
“What it means is that a lot of our history is being lost,” he added. “I’m hoping the project will show people there is a place for modern and classic architecture, a marriage of old and new. Once it’s gone, it’s never coming back.”
The project has consumed plenty of hours, but for Cross the work is worth it.
“The average time spent working on a photograph depends on the type of picture it is,” he said. “If it’s a scenic shot with lots of sky and nature it can be quicker than others, but removing blemishes and tears on photographs takes longer. With pictures featuring a lot of detail it could take a few days.”
And the work doesn’t stop there. Once the picture is published, Cross isn’t finished with it.
“Once I get feedback from people I like to go back and add detail,” he said. “For instance, someone might say that the colour of a particular uniform or building should be different. The changes add to the picture.”
Restoring the pictures has given Cross a different view of Irish history. It’s why he’s more than happy for people to use his work in the field of education and learning.
“It’s great to hear about people using the pictures as points of reference in their studies,” he said. “The pictures are there for teachers to use to help students engage with our history.
“The pictures are a snapshot in time,” he said. “Working on them, adding colour and publishing them online means they will be there for many years to come.”
You can follow Rob Cross and his work on Facebook, Twitter or Instagram - @RobCross247. People can also donate to his work on www.patreon.com/RobCross247