Select framed artwork features WolfWalkers, The Breadwinner, Song of the Sea, and The Secret of Kells 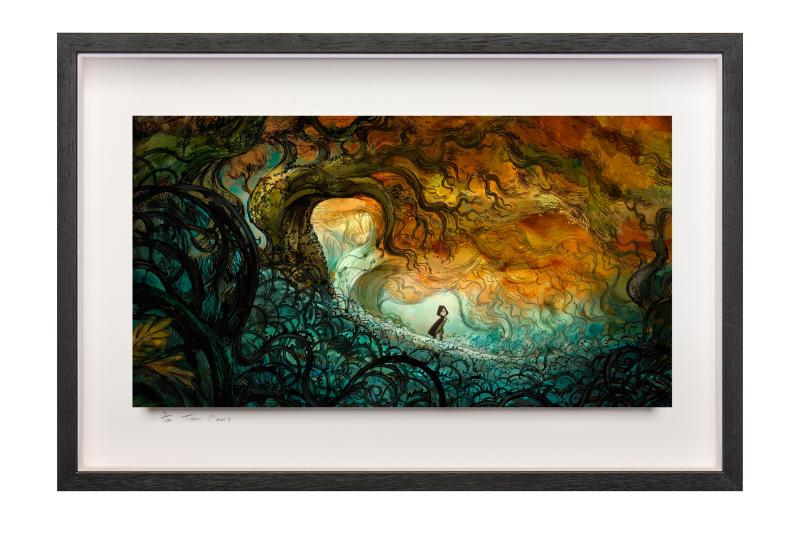 A print from Wolfwalkers

Originating directly from Cartoon Saloon’s Studio in Kilkenny, the series of collector’s artwork is now available and ranges in pricing from €450. Each print is signed by the films’ directors and numbered.

Share Magic
“The launch of our new art gallery offers us a tremendous opportunity to share the magic of these outstanding movies with fans around the world,” said Brian Tyrrell, General Manager, Brand Development with Cartoon Saloon.

“We are extremely proud of our films, particularly with the most recent recognition Wolfwalkers is receiving with Academy, Golden Globe and BAFTA Award nominations. We are thrilled to offer these carefully curated state-of-the-art limited edition numbered prints that are sure to become a valuable collector’s items in the years to come.”
Academy Award, BAFTA and Golden Globe-nominated Wolfwalkers, directed by Tomm Moore and Ross Stewart, premiered at the Toronto International Film Festival. It was heralded by The Hollywood Reporter as ‘a visually dazzling, richly imaginative, emotionally resonant production’, while IndieWire headlines read, ‘Cartoon Saloon’s Irish Folklore Trilogy Ends with the Best Animated Film of the Year’.

The film opened theatrically in the US on November 13, 2020 and is now available on Apple TV+.

Superstition, Magic
Wolfwalkers follows Robyn Goodfellowe, a young apprentice hunter who journeys to Ireland with her father in a time of superstition and magic to wipe out the last wolf pack.

While exploring the forbidden lands outside the city walls, Robyn befriends a free-spirited girl, Mebh, a member of a mysterious tribe rumoured to have the ability to transform into wolves by night.

As they search for Mebh’s missing mother, Robyn uncovers a secret that draws her further into the enchanted world of the Wolfwalkers and risks turning into the very thing her father is tasked to destroy.

Bewitching
Nominated for an Academy Award in 2010 for best animated feature and winning awards at festivals worldwide, The Secret of Kells is a bewitching vibrantly animated fairytale for children and adults alike that is a spirited retelling of the provenance of Ireland’s most cherished artefact, the Book of Kells.

It was followed up in 2015 with Song of the Sea in 2017 with The Breadwinner and now for Wolfwalkers in 2021. These feature film nominations were added to with the nomination of short film Late Afternoon in 2018.

Cartoon Saloon’s Emmy-nominated preschool series, Puffin Rock, is currently broadcast worldwide on Netflix and as well as linear television in over 25 countries.