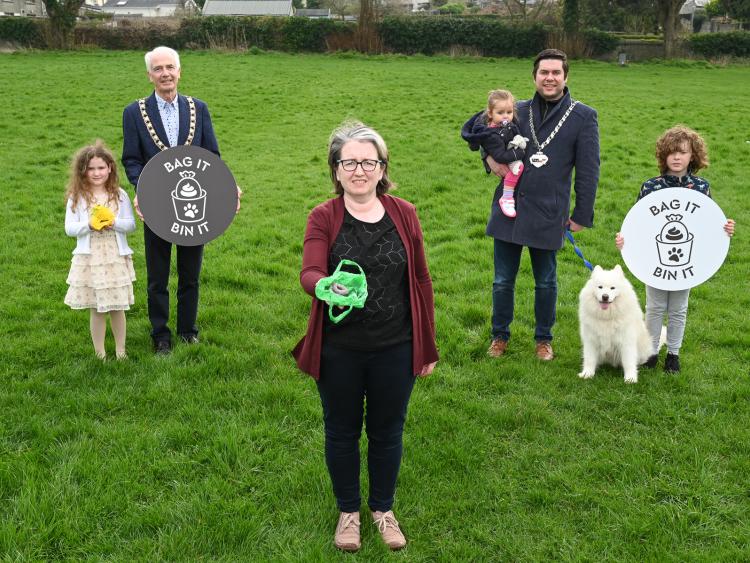 Mayor of Kilkenny John Coonan with his grand-daughter, and Cathaoirleach of Kilkenny County Council Andrew McGuinness with his children and their pet dog Roxy, offered their support to launch the campaign in Kilkenny City.

Speaking at the launch, Mayor John Coonan explained that a relatively small proportion of dog walkers fail to clean up after their dog but it has a massive impact on the streets and green areas across the city.

“This campaign is fantastic and I ask every residents’ association to row in behind it,” said the mayor.

“Currently, there is a series of community engagement activities being planned over the summer and I think the key of the campaign’s success will be the community support behind it, the council’s environmental awareness officer is looking to collaborate with as many local groups as possible to spread the campaign message far and wide.”

Cllr McGuinness said that the campaign timing couldn’t be better, as dog fouling had been highlighted and discussed at the last Kilkenny City municipal district meeting.

“As a father and a dog owner, I know my obligation to ensure our dog Roxy doesn’t spoil green areas for others,” he said.

“We are fortunate in Kilkenny to have so many open green spaces which have been utilised so much over the past few months, as we approach the summer, it’s imperative that we keep our green spaces clean, so children can play safely without the risk of trampling through dog dirt.”

The council’s environment section has seen a notable increase in dog fouling related complaints and as the same issue exists in Carlow, Wexford and Waterford. Environmental awareness officer with Kilkenny County Council Bernadette Moloney said it was only sensible to combine resources and develop a campaign between the local authorities.

“Over the next 12 months, a variety of community initiatives will be rolled out throughout the city and county and an education pack aimed at primary schools will be launched in the autumn.

“The message is simple, dog walkers must ‘Bag it, Bin it’ — and there is no excuse, if there is no bin on your walking route, you must bring it home for disposal,” said Ms Moloney.

“It may not be the most glamorous part of owning a dog, but it is part and parcel of it all the same. Dog owners should leave the house prepared, with a bag in hand to ensure they can play their part to keep their community cleaned.”