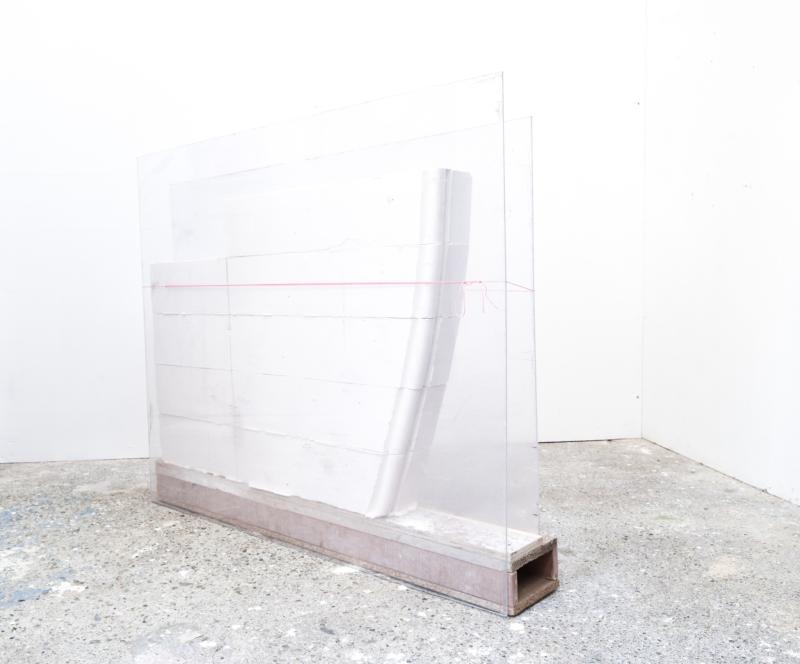 Kilkenny is a place that identifies strongly with its history, captivating the outsider’s eye with its prominent heritage and evident past.
History is embedded in the architecture of the city, time is told through exposed stone and residual traces. For Kilkenny’s locals it is a destination to complete errands — a scope for mundanity — and a space for lived experience.
This means it must adapt and evolve to facilitate modern day living; the new bus route navigates the narrowness of its streets and the building of bridges eases access and accommodates the increase of traffic.
(the site + ruin) is a solo exhibition by artist Robert Dunne. Dunne’s practice looks at normal elements in our lived environments, extracting the typical from the unseen everyday.
Through the process of making, he questions our imprint of time and need. Things become altered and changed, yet, reinterpreted in a common language of materiality — permitting the residual traces to cite their known use and origin.
In response to Kilkenny as a place, Dunne is drawn to the evidence of process shown in the development of the city, this is continuously conveyed through its structure and materiality.
When a local becomes a voyeur in their hometown, an awareness can be drawn to things that have blended into the banal.
Robert Dunne lives in Kilkenny. Working mainly with plaster and used wood, he says his work ‘is a way to reframe our ‘made’ environment’.
“I try to capture physical and visual elements of my surroundings and reimagine, juxtapose and alter their structure and meaning to make new and vaguely familiar scenarios,” he said.
Dunne has exhibited throughout Europe, USA and Australia and has had solo shows in Theca Gallery, Milan, Italy, Linenhall Art Centre, Mayo, Pallas Studios, Dublin and Kilkenny Arts Festival.
In 2019 he exhibited in the group show Far From Here at The Complex, Dublin and Reviving Plains, a joint show, with Stephanie McGowan at the 126 Gallery, Galway.
Selected group shows include Periodical Review No.8, Pallas Studios, Winter Open, RUA RED, Artworks, VISUAL, Carlow, PeripheriesOPEN, Peripheries Space, Biennale Internationale d’art non objectif, France and Combined, Gray Contemporary Houston.
He studied in the Cleveland Institute of Art, School of the Museum of Fine Art, Boston, and received his BFA from the National School of Art and Design. He has received awards from the Arts Council of Ireland as well as studio residency awards including, The Tyrone Guthrie Centre and Arthouse, Laois.
(the site + ruin) is the second exhibition of the Kilkenny County Council Arts Office’s Emerging Curator in Residence 2020 and is funded by the Arts Office, the Arts Council of Ireland and supported by Rothe House.