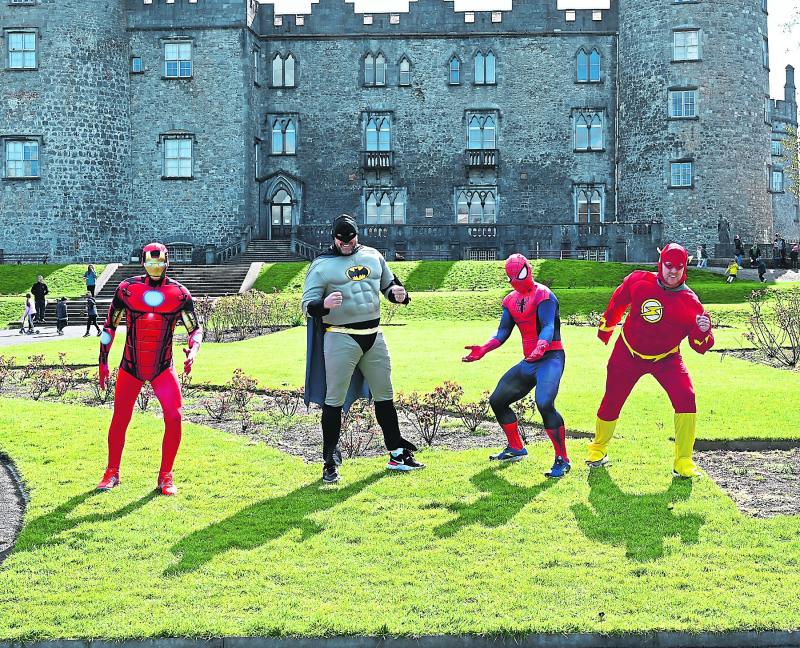 The bravery of a Kilkenny youngster has inspired three local men to transform into superheroes and complete a gruelling physical challenge in her honour.
The campaign has been set up by Kilkenny native Mark Duffy in order to raise money for the family of nine- year-old Emily Gerlach Nascimento. Emily is currently in the early stages of an intense two-year treatment plan for childhood cancer at Our Lady’s Hospital in Crumlin and is travelling to Dublin up to three times weekly to receive treatment.
This Friday (April, starting at 5am, Mark and his friends Jessie and Trevor will run five kilometres every five hours for a total of 55 hours to raise as much funds for the Gerlach Nascimento family.
Not only will they be running to raise as much funds as possible for the family but will be doing so in superhero fancy dress to honour Emily’s heroic journey. The trio are hoping that others will join them virtually and support the campaign for such an important cause.
Trevor Coady, aka Spiderman explained how the idea came about.
“Emily’s Dad Marcos is the caretaker in my kid’s school at the Kilkenny School Project and when we heard that his little girl was sick we decided to do something and to organise a fundraiser.
“The three of us all know each other through running so we came up with the idea of running five kilometres every five hours for 55 hours. It will be a novelty event with several well known superheroes making a guest appearance,” said Trevor.
The superheroes will run a loop starting out in Loughboy and across the Ring Road returned on the Waterford Road in what promises to be an entertaining spectacle.
Emily was diagnosed with Acute Lymphoblastic Leukaemia last November. Emily remained in the intensive care unit for seven days during which she underwent several procedures under general anesthetic and had her first round of chemotherapy.
Emily to go through weekly lumbar punctures, chemotherapy, and other treatments and any monies raised will go directly into the cost of her treatment and her family's maintenance during this period. When Emily's treatment is complete any surplus of funds will be paid forward to Ronald McDonald House at Crumlin Children's Hospital to help other families facing financial hardships. For more see www.gofundme.com
/f/run-for-emily