Deposit Return Scheme: ‘We are really hoping it will reduce amount of litter being disposed of illegally’ 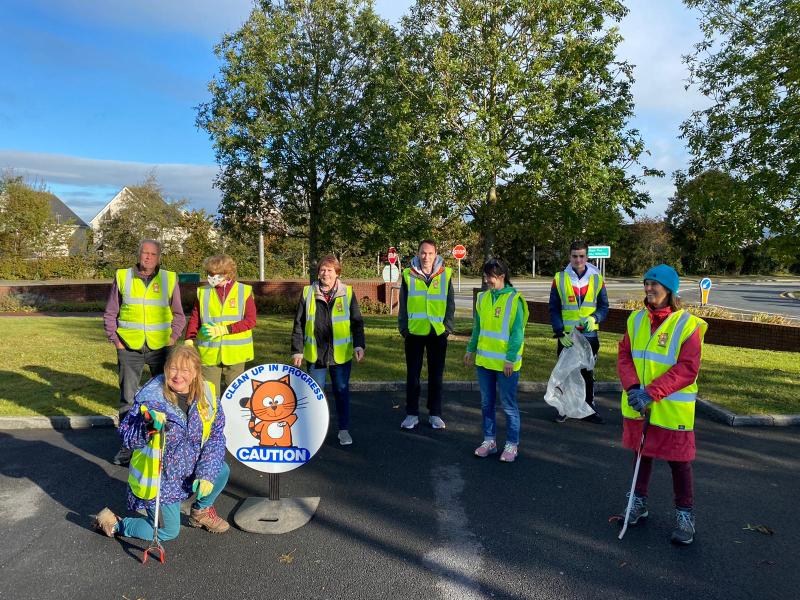 A recent Saturday litterpick meet up in Kilkenny. BELOW RIGHT: The group is collecting 10 to 15 bags of rubbish on each occasion

The arrival of the pandemic changed many things in our daily lives, and the activities of those who volunteer their time to improve their communities have been deeply affected by the restrictions as the months go by.

Keep Kilkenny Beautiful (KKB) is one such group who have seen upheaval in their routine, at a time when it has perhaps never been more relevant. There has been a significant increase in waste and litter complaints in Kilkenny over the past year.

KKB has had to quickly adapt to the Covid restrictions. Where activities were usually done in groups, along the Ring Road or approach roads, that hasn’t been possible to the same extent.

“We do it differently now,” explains KKB chairman Pat Boyd. “What we do is kind of individuals living in different areas are assigned a different route, a different approach road or stretch of Ring Road. So, we still go out and respond to the litter proliferation issue, and we do that every Saturday morning.”

In some ways, the new system has been potentially more effective, in that they are collecting a lot more litter. On average, for the last four weeks, the volunteers have been collecting 10 to 15 bags of litter every Saturday morning. 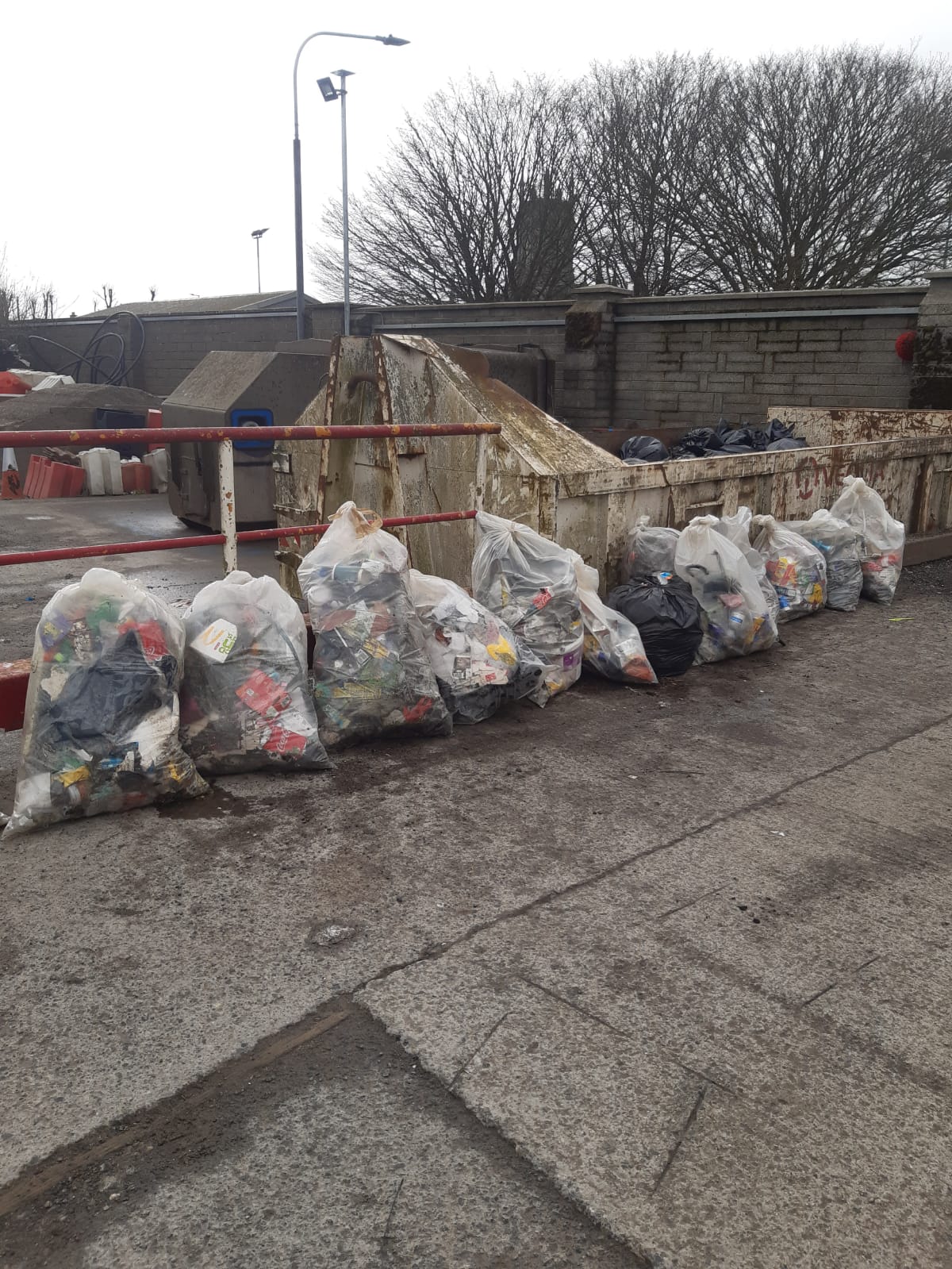 This time of year has its own challenges. In the early months, the vegetation dies back on the roadside, revealing all the litter that accumulates. It’s also a good time to clean rivers, and KKB has had big cleanups on the Breagagh and Pococke in recent weeks.

“You can see the litter at this time of year,” says Mr Boyd. “From now on, two weeks time, it will be submerged and tangled by the vegetation. You won’t see it — everything will look lovely and pristine, but underneath that canopy of lovely vegetation, there’s an awful lot of litter.”

Despite this, the tireless efforts of these volunteers along with the hard work and investment by the council saw Kilkenny top the IBAL charts for cleanliness in January. The core of the city receives significant regular litter management and cleaning attention from the council.

“They (The council) do a terrific job. So we just do the outskirts,” Mr Boyd says. “It’s mainly litter from cars, plastic bottles, glass bottles, liquor bottles, takeaway food wrappers, snackboxes — I won’t name premises. Plastic carrier bags. It’s a bit of everything. It is frightening to see just the amount of litter that does get chucked out from car windows.

“We are all proud of Kilkenny as the Cleanest Town (IBAL), and it is really heartbreaking when you go back week after week and you leave it spotless and pristine after the Saturday. You go back the next Saturday and it can be just as bad again.”
The hope is that much of the ‘heavy lifting’ in terms of deep litter buried into the backs and bottoms of ditches has now been done, and the light, additional litter can be dealt with as it accumulates. Mr Boys says the segregation of the waste is a new challenge in Covid times also.

“One of the heartbreaking things is when the volunteers are out litter picking, because you can’t go in groups, you can’t segregate as you pick,” he says.

The plan now is to pick every second week and have a team of 12, working in groups, attending to each of the designated areas .

Then they will bring the collected rubbish to one of the bring banks where one of the crews of people will be waiting to segregate and rinse it if necessary.

“So at least we know the litter we’re picking is segregated,” he says.
For most of history it did not exist, but the proliferation of plastic and packaging has really come to attention of late. Mr Boyd notes it was around 40 years ago, when fast food wrappers and supermarket packaging was becoming an issue.

“It was the first big problem that KKB had to rise to,” says Pat.
“So it’s still very much a core part of our activity.”
The Kilkenny People this week highlights the waste management challenges arising from the past few days —and bring banks are one facet of this. It’s not the first time it’s been an issue.

“We are worried about the capacity of the bring banks. It would be great if there was more capacity,” says Mr Boyd. “But it would be even better again if there was less litter — to reduce the amount of litter. What we are hoping for and waiting for is when the Deposit Return Scheme (DRS) eventually kicks in. There’ll be a refund given on plastic cans and plastic bottles and glass bottles.

“We are really hoping that will reduce the amount of litter being disposed of illegally. It should have been in years ago — it’s been in Europe and America. I was just reading, in New York, anyone who sells anything in a bottle is obliged to take in containers. It is very effective, because it also deals with retrospective littering as well.”

The DRS — the legislation for which is currently under going public consultation — sets out to increase recycling and support the circular economy by keeping materials in use and reducing demand for new materials. Similar schemes have been in operation elsewhere for decades.

Mr Boyd says it may not be implemented here until Q3 2022. “So there is no incentive there for anybody to return cans, bottles or plastic until then unfortunately,” he says.

“The suggested refund amount is 20c on the bottle - but wouldn’t it be great if it was 50c? There wouldn’t be a bottle, can or thing anywhere, and there’d be lots of young lads busy on the weekend!”
All said, there is an acknowledgment that despite the ongoing issues, Kilkenny is one of the better place for tidiness.

“The County Council have such commitment to litter prevention and cleaning up litter, Kilkenny is a clean city and it does create the right impression,” says Mr Boyd.

“We have to keep it that way. But it costs a lot to clean the city —can you imagine what that money could be invested in if there wasn’t litter?”