Benjy, Bosco and the Boomerang Kid! 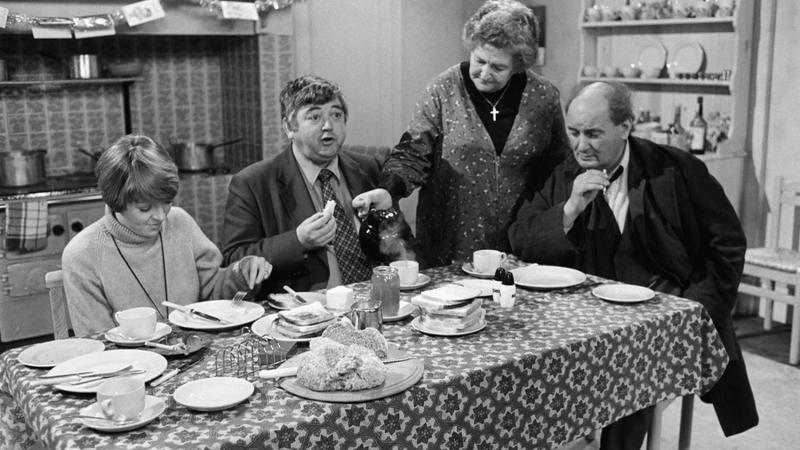 The Riordans was the staple viewing of our family on Sunday nights and was as revered as Sunday mass itself!

The actor Tom Hickey passed away on May 1. Tom was better known to folks of a certain age (ie my age) as Benjy Riordan, or simply Benjy, the role he played in the hugely popular, and successful, TV drama serial The Riordans for 14 years (1965 to 1979).
Benjy Riordan - along with Maggie, his ‘beloved’, his father Tom, mother Mary, Batty Brennan, Minnie Brennan, Dr Howard, Father Sheehy and a host of other characters - was part and parcel of my life back in the black and white days of early television.
The Riordans was the staple viewing of our family on Sunday nights and was as revered as Sunday mass itself!
The Riordans had an added interest for Kilkenny viewers as it was set in Kells, County Kilkenny (home to its creator Wesley Burrowes for a period) and Tynan’s Bridge House Bar occasionally featured when ‘the men’ came to town and had a few drinks after the Mart.
The Riordans inspired the creation of a British counterpart: Emmerdale Farm (now simply Emmerdale) on Yorkshire Television (now ITV) in 1972 and which is still going to this day. Bracken (1976 to 82) was a spin off from the Riordans which led to yet another spin-off: Glenroe (1983 to 2001) all scripted by Wesley Burrowes and which launched the career of Gabriel Byrne.
There were several controversial scenes in The Riordans down the years, yet one that I always remember features Benjy and Batty at the kitchen table tucking into soup and sandwiches. Whereupon Benjy turns to Batty and asks: ‘Do you ate or drink soup, Batty?’ To which the wise old Batty replied: ‘Neither, you sup soup’.
Funny the things you remember.
In my student years in UCD I saw Tom Hickey perform in work by Gogol in the famous Focus Theatre in Pembroke Place founded by the renowned actor and artistic director Deirdre O’Connell, wife of Luke Kelly of the Dubliners. A change for sure from the rural-based Riordans; nearer home I saw Tom perform in Michael Harding’s ‘The Misogynist’ in Cleere’s little theatre some years back.
So, that’s Benjy – a name engraved on my memory; following are some more names from the early days of television (many of them black & white) engraved on my memory – see how many of them you can recall: Jim Figgerty. Daithí Lacha. Murphy agus a Chairde. Jimmy Flahive. Bláithín. Forty Coats. Monica Sheridan. Bunny Carr. Paddy Crosbie. Don Cockburn. Jimmy O’Dea. Eamonn Andrews. Noel Andrews. Michéal MacLiammoir. Sally O’Brien (‘and the way she might look at you’). Maureen Potter. Charles Mitchell. Bat Masterson. Trampas. Brendan O’Reilly. Zebedee. Katie the Farmer’s Daughter. Kojack. Derek Davis. JR. Bibi Baskin. Thelma Mansfield. Kathleen Watkins. Arthur Murphy. Bosco. Aine O’Connor. Laura Ingalls Wilder. Seoirse agus Bartley. Kunta Kinte. Eamon de Buitléir. Columbo. Séan O Shea. Kermit. Brian Farrell. Mr Ed. Jim Rockford. John O’Donoghue. Ulick O’Connor. Dennis Franks. Tony McMahon, John-Boy. Vincent Hanly. Micheál Ó Hehir. Dr Richard Kimble. Gus Martin. Pat Barry. Arthur Murphy. Mick Lally. Brian Cleeve. Frank Hall. Dinny Byrne.
Now here’s the good news – if you remembered all those names you have an excellent memory, full marks and well done.
The bad news is, and I hate to tell you this but, in the words of my late mother, ‘you’re as auld as a fog.’ In other words you’re my age!
Oh, maybe not as old as a fog but as old as a heavy, a seriously heavy mist!
A knack for nicknames!
Sticking with names - the Scots have a knack for nicknames. Here are some that always bring a smile to my face:
Two Soups - his real name is Campbell Baxter. The Olympic Flame – he never goes ’oot. The Parachute - lets everyone down at the last minute.
Rembrandt - loves saying to colleagues: ‘Let me put you in the picture’. The Genie - magically appears whenever anyone opens a bottle. Dulux - his pals reckon he’s only got one coat. Soapy - washes his hands of any problems that crop up.
The Hostage - when anyone asks for help he always replies: ‘Sorry, my hands are tied’. The Boomerang Kid - whenever asked a question at work always replies: ‘I’ll get back to you on that’.