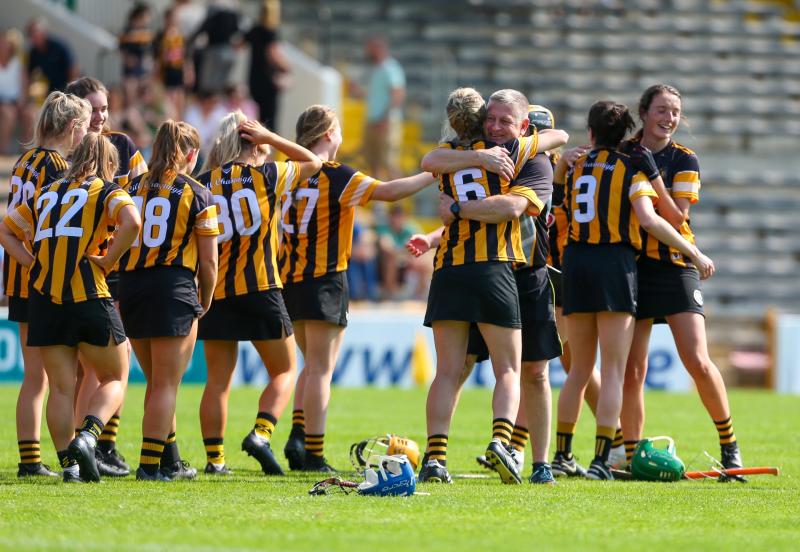 Kilkenny manager John Scott celebrates with his players after their victory over Meath PICTURE:INPHO

It was a day to remember for Kilkenny camogie as two county teams powered their way into All-Ireland finals.

The intermediates booked a place in their first All-Ireland final since 2016 when they beat Meath by 0-13 to 0-9 at UPMC Nowlan Park.

John Scott's side roared into action and, backed by scores from Ciara O'Keeffe and Sophie O'Dwyer they led the Royals by four points at half-time (0-9 to 0-5).

Kilkenny maintained that advantage in the second half, with both sides battling the sweltering conditions. Jane Dolan led Meath's comeback charge, but with Sophie O'Dwyer in solid free-taking form Kilkenny wouldn't be denied their victory.

The Cats will play either Galway or Antrim in the final on September 12.

Elsewhere the Kilkenny minors made sure of their place in the final when they beat Galway.

Mike Wall's side made the trip to Abbotstown for their final four clash and came home victorious after extra-time on a 3-21 to 1-25 scoreline. They will face Cork in the All-Ireland final.

The Cats will be hoping to have three teams in finals when the seniors take on Cork in their All-Ireland semi-final tomorrow (Sunday) in Croke Park. Throw-in is at 4pm.