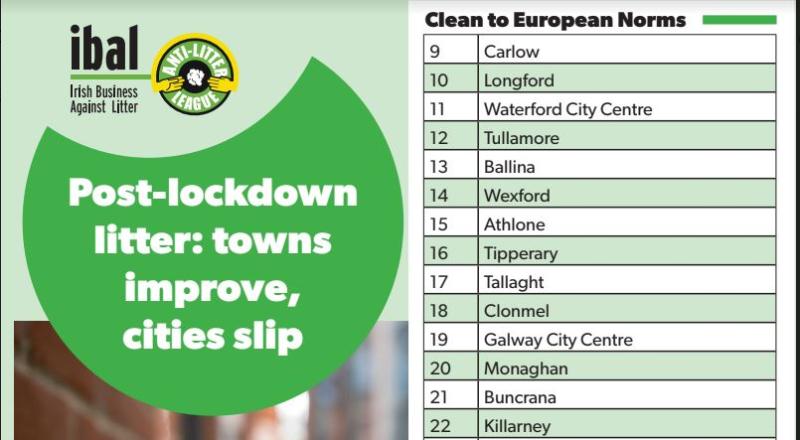 Kilkenny has lost its grip on the coveted top spot in the latest Irish Businesses Against Litter (IBAL) rankings.

The first post-lockdown survey by Irish Business Against Litter shows Kilkenny in sixth position in the ranking of 40 areas nationwide. Portlaoise emerged as cleanest town.

The An Taisce report for Kilkenny says: "Kilkenny retains its perennial status as Cleaner than European Norms. As we have come to expect, there were no heavily littered sites. Kilkenny Train Station (Exterior and Interior) wasn’t just good with regard to litter but was very well presented and maintained – it is clearly a place of great pride, based on the various plaques / awards hanging on the wall. 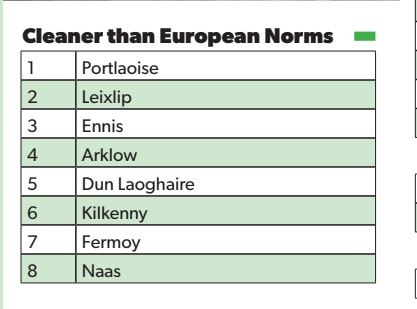 "Other top-ranking sites of note included the River Bank, Parliament Street and Market Cross Shopping Centre. The latter was particularly well presented and maintained with the opportunity for ‘separating’ waste, attractive seating, planting and some welcoming features along the pedestrian entrance."

Only in January, Kilkenny City topped the rankings in IBAL's final litter survey of 2020, for a record fifth time. Where the ground has been lost this year may be established, but the An Taisce report appears overwhelmingly positive and it only singles out two areas - one bring bank and one derelict building - for any genuine criticism.

Nationally, although the majority of towns have cleaned up over the past 12 months, litter in our main cities has worsened to levels not seen in ten years.

The study showed a near-30% increase in the prevalence of PPE masks on streets and an increase in alcohol-related litter such as cans and bottles.

“The need for PPE has not abated – unfortunately we’re still using disposable masks, we’re still dropping them at an alarming rate and they are still not being picked up,“ says Conor Horgan. “We are consuming more outdoors and this is translating into more food- and drink-related litter.”

Despite this, the survey showed a 20% drop in coffee cup litter. There was also a steep fall-off in cigarette butts. IBAL was once again critical of the failure of local authorities to address sites which they have previously highlighted as heavily littered, especially in urban areas. Of the 103 such sites exposed last year, fewer than half have been cleaned up in 2021.