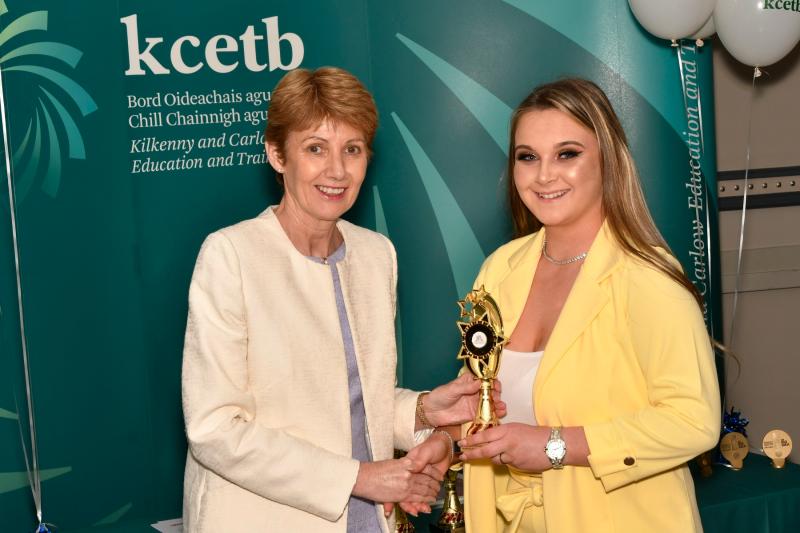 Chief Executive of KCETB Eileen Curtis with Nicole O’Leary who was awarded Student of the Year, sixth year

Kilkenny Youthreach has held its end-of-year ceremony at the Ormonde Hotel where learners received academic, volunteering and personal achievement awards.

Kilkenny Youthreach is a full-time education programme that gives a second chance to early school leavers aged 15-20years. Operated and managed by Kilkenny and Carlow Education and Training Board (KCETB), Kilkenny Youthreach offers young people the opportunity to achieve a Leaving Certification qualification in an out-of-school setting and develop social and personal skills in a safe and supportive environment.

Many learners progress to further education and training, and/or employment.

“We survived our generation’s historical disruption,” said one Kilkenny Youthreach learner, Cora Ryan, who spoke eloquently before the distribution of awards.

“Without you (Kilkenny Youthreach) I wouldn’t be able to say ‘I tried again and made it work’.”
Eileen Curtis, Chief Executive of KCETB, congratulated the Kilkenny Youthreach learners on what they have achieved. 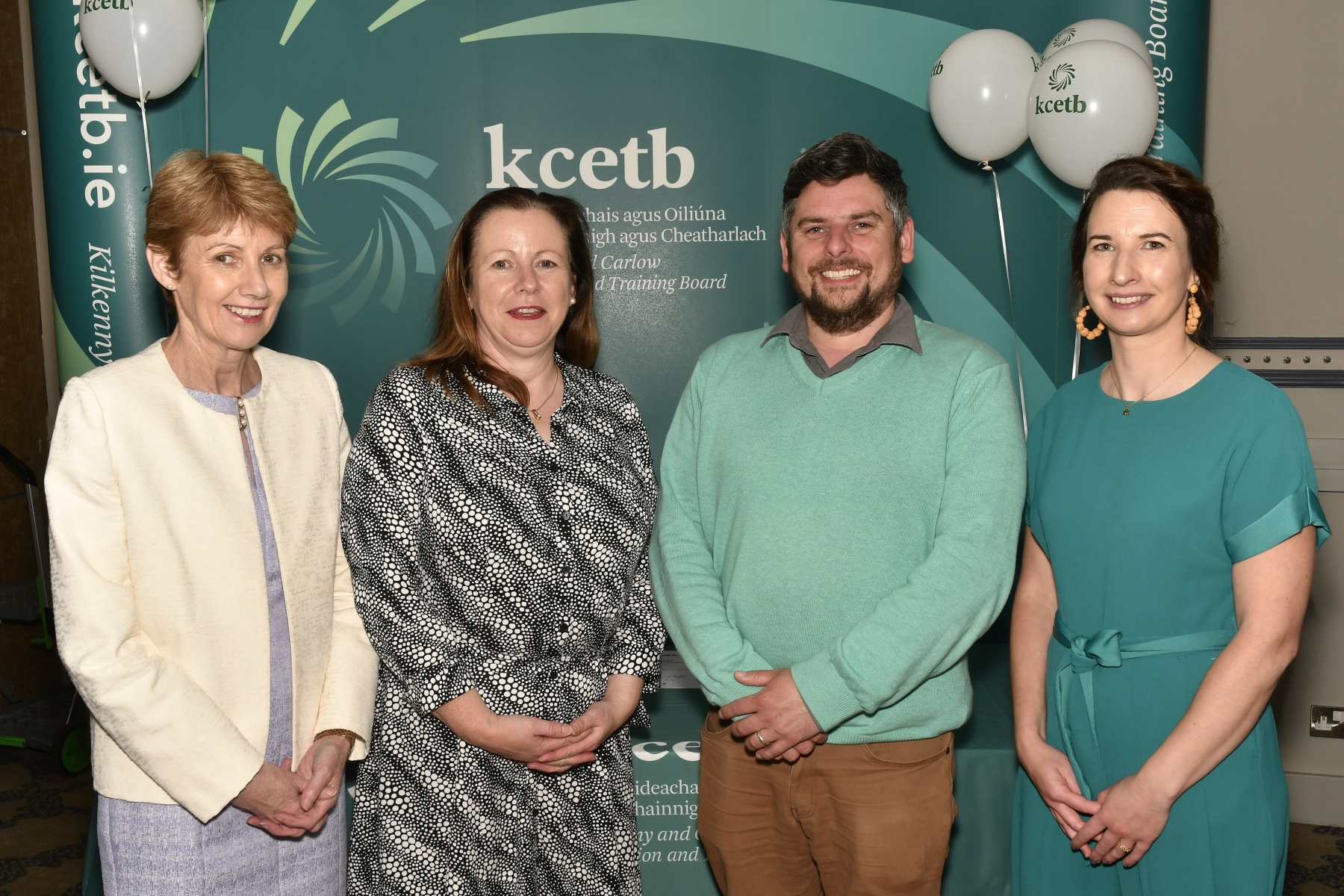 “It is wonderful to be getting back out meeting learners and seeing their work,” she said.

“During Covid, we learned the importance of learning and being with other people; of being connected and part of a group. I want to compliment you all on the standard of working achieved here and on your creativity.”

She praised the Kilkenny Youthreach staff who go above and beyond the call of duty in helping young people in Youthreach.
Kilkenny Youthreach co-ordinator Michelle Murphy welcomed the learners and their parents and acknowledged their hard work, despite the disruptions caused by Covid-19.

“It is clear from the list of achievements this year that Kilkenny Youthreach learners achieved a huge amount, both inside and outside the classroom”, she said.

“Students involved in The B!g Idea project did themselves proud on a national stage, coming away with the top prize in the Mental Health category. We are very proud also of our fifth year learners who completed the Foróige Leadership programme and our sixth year learners who completed the Bronze Gaisce award. Incredible voluntary work was undertaken during the year also, including helping with food hampers for the homeless at Christmas time and sterling involvement in the One Million Stars against Violence campaign.” 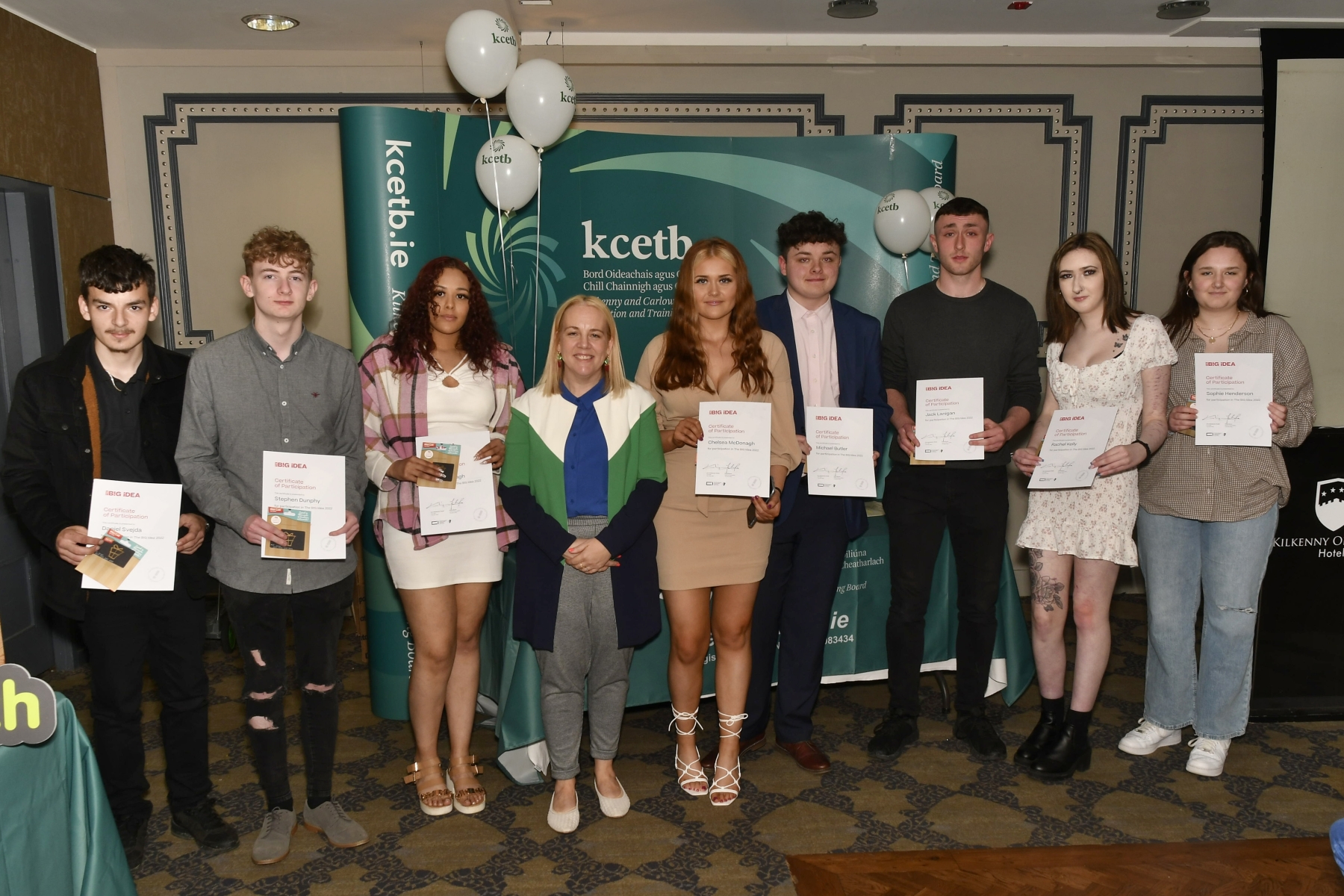 Fiona Doyle from The B!g Idea, Paula Harte from Volunteer Kilkenny and Rita Comerford from Foróige Leadership Programme attended the ceremony and presented certificates to learners in recognition of their work.