National Monuments Service may see fit to issue notices on rehabilitation and conservation of The Bridge House, Kilkenny 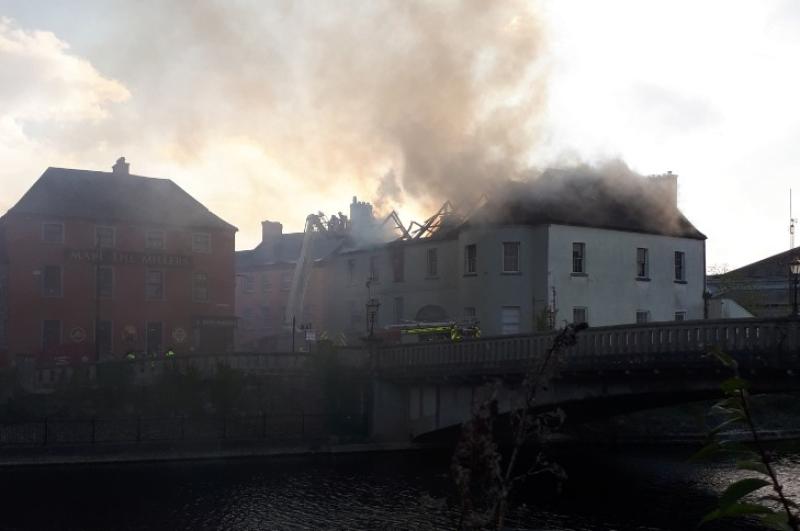 Historic Dr Mitchell's House (The Bridge House) on the corner of John Street, Kilkenny, on the bank of the River Nore

The latest on the Bridge House is that it is subject to the National Monuments legislative framework and the National Monuments Service, at their discretion, may see fit to issue notices in respect of the rehabilitation and conservation of the property.
Meanwhile, business is back to normal on John Street and surrounds following the fire at the Bridge House on Wednesday morning of last week.
Attempts to salvage part of the building and stabilise it were affected by Storm Callum on Friday morning and a Status Yellow Weather alert because of fears over a crane on site and wind speeds.
There was also serious concern over the exposed chimneys on the property but luckily the city missed the worst of the gales and the workers were able to secure the exposed building fabric.
Despite the weather, teams worked all through Wednesday, Thursday and Friday to bring it under control, check for damage and finally cleanup.
Loose slates were a particular problem and it is amazing that the walls of such an old building, dating back to the middle of the 19th century remained intact after the inferno on Wednesday.
Hoarding has been placed all around the site to ensure no one can get in following the events of Tuesday night and early Wednesday which culminated in a member of the public ringing 999 after seeing smoke coming from the building and after a member of the gardai had to rescue two people from the building after it went on fire.
Senior City Engineer, Simon Walton was quick to thank the local community; John Street traders and in particular, the residents, for their patience and perseverance.