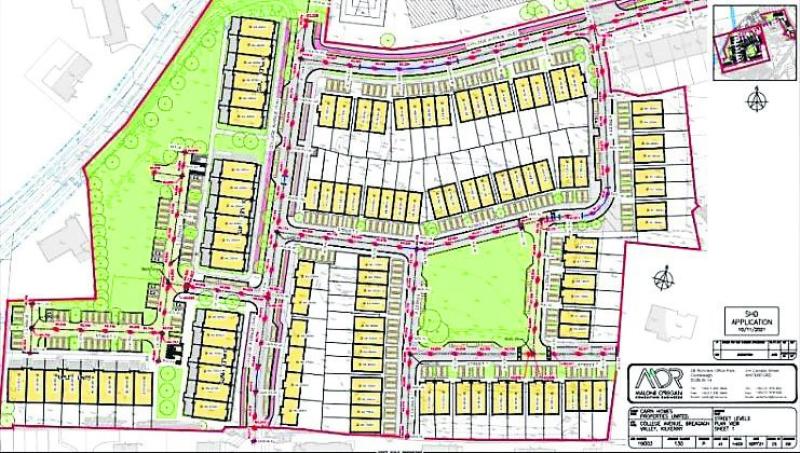 An array of concerns over a large new housing development proposed for the outskirts of Kilkenny city were voiced at a special meeting of Kilkenny County Council last week.

Developers Cairn Homes have applied directly to An Bord Pleanála for permission to build a Strategic Housing Development (SHD) of 184 new homes at a site in the Breagagh Valley and Callan Road area — the western environs.

City councillor John Coonan called for the special meeting to discuss the local authority’s submission to An Bord Pleanála given the development’s sheer scale.

“The visual impact of this development cannot be understated given that the developer is planning to build three-storey housing and we need assurances that a high-quality finish can be achieved,” he said.

Cllr Eugene McGuinness noted that while feedback from residents to the plans has been mostly positive, ‘some people are fearful that they will spend the next ten years living on a building site’.

In making the remark, the independent councillor was acknowledging the fact that a new primary school has been earmarked for the area too, and has not yet received a provisional timeline for construction.

“I also have no confidence in Irish Water to deliver the required infrastructure on time or as expected,” he added.

Senior planner Denis Malone acknowledged that the idea of living on a building site for ten years is ‘not an attractive one’ but also noted that a phased building scheme could be applied to alleviate construction traffic for residents in such a scenario.

Cllr Maria Dollard brought attention to previous housing developments built in Kilkenny that were not built as originally planned.

The Green Party councillor drew particular attention to the Rath Ullord development on the Kilkenny ring road, where ‘community facilities had been planned but have seemingly been scrapped’.

Cllr Dollard also asked for the impact of construction works on the adjacent Breagagh River be considered, given that the river is already ecologically threatened and in a poor state.

Cllr David Fitzgerald cited concern over ‘construction disruption’ for current residents too and noted the lack of a waste management plan and community facilities in the application.

Due to the scale of the development, Cairn Homes did not have to apply to Kilkenny County Council planning permission as it falls under Strategic Housing Development rules.

Three areas of public open space are provided throughout the site (one which includes a playground) and 920 sqm of communal open space is provided to serve the proposed apartment/duplex units.

The deadline for public submissions on the Strategic Housing Development has now passed, but the council must make a submission in the form of a chief executive's report to An Bord Pleanála by January 17.

That report will summarise the main issues raised in submissions, the views of the elected members, and the chief executive’s own views on its impact.