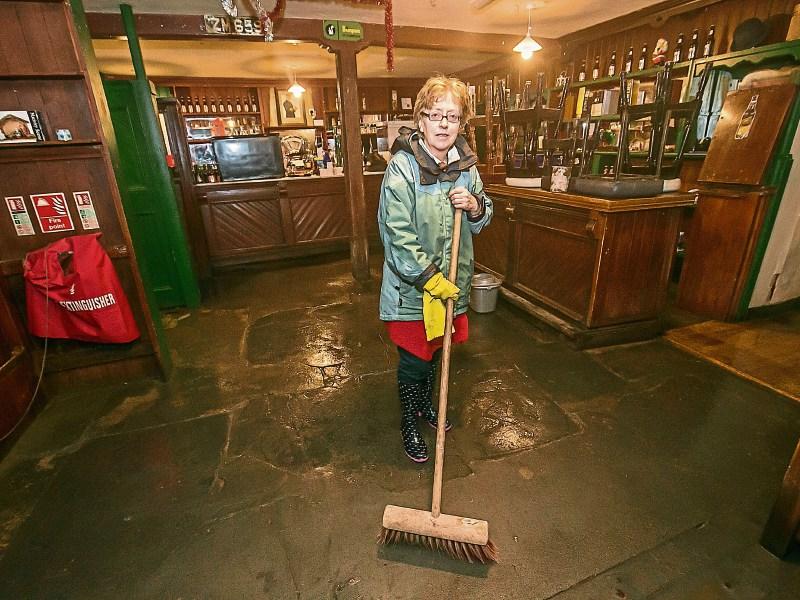 Jack Bolger has lived in Barrow Street, Graignamanagh all his life - that's 78 years.

He can't get insurance for his home and on Wednesday afternoon it was flooded by up to three feet of water as the worst floods ever seen hit Graignamanagh.

His story reflects the pain felt by all those directly affected by flooding.

The Duiske River had already burst its banks and flowed down the main street, exacerbating the situation before the Barrow flooded on to the Quay and up his street.

Jack's son-in-law, Johnny Prendergast is 51 years of age and has never seen it as bad.

“They were going to put in a flood relief scheme but a petition went around the town in 2011 to stop it and that's ok until peoples' homes are devastated,” he said.

“They can do a flood defence in every other town and why they can't do it here I don't know,” he added.

The only thing that Jack Bolger's son Eoin could retrieve from his parents house were his father's tablets, everything else was destroyed.

“Everything is gone; the fridge, freezer, television, everything,” Jack said.

“I'm afraid the time for talking is over we need action at this stage,” said Jack.

Having lost everything, Jack Bolger, a testament to the calibre of the man, is worried about the gentlemen from Tramore who had been living on a barge on the Quay. “We don't know if its gone or submerged but his home is gone. Boats are missing and its very bad,” he said.

Things were made worse by the fact that two eyes of the bridge in the town were blocked, meaning flood water from the Barrow had nowhere to escape, Philip Cushen explained.

There have been many heroes in Graig since the floods struck but none more so than local farmer, Ken Walsh who ferried people across the flood; transported items and sandbags - whatever was asked of him.

A lot of credit goes to local chef, food writer and teacher, Edward Hayden who brought the situation in Graignamanagh to the attention of the nation with a number of on the spot reports which were picked up by many TV networks and he was on SKY News to talk about the plight of his native town. Well done Edward.

The last few times that floods devastated Graignamanagh there was uproar and talk of action but as the months and years passed, determination to tackle the issue abated just like the floods.

Let's not leave another five years go by before the town and its people are again brought to its knees.

A special meeting of the County Council will be held on Friday at the behest of Cllr Chap Cleere from Skeoughvosteen and that's good.

However the time for talking is over - Action is required.