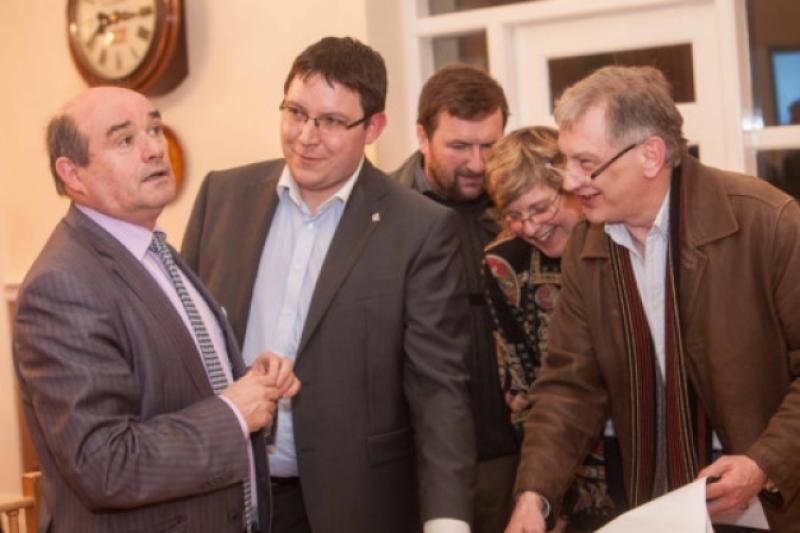 City centre traders gave a cautious welcome to the upgrade works planned for High Street and the manner in which they will be carried out, with an overall positive sentiment at last week’s ‘Medieval Mile’ briefing organised by the local authorities.

City centre traders gave a cautious welcome to the upgrade works planned for High Street and the manner in which they will be carried out, with an overall positive sentiment at last week’s ‘Medieval Mile’ briefing organised by the local authorities.

However, the traders expressed disappointment in the way the meeting had been arranged, with several attesting to receiving very short notice.

“The letter that was sent around to everybody on High Street is disappointing in that there was only two days’ notice given,” said Martin Costello of Murphy’s Jewellers.

“As business people, we are busy and there are a few people who wanted to be here who simply couldn’t. Also, the letters weren’t even addressed by name or to the manager/owner, and so they were handed in to staff and in some cases not passed on. It could have been done better.”

Senior engineer Kieran Fitzgerald, director of services John Mulholland, and lighting designer Rocky Wall briefed the traders on the details of the project. These include minor alterations to loading bays and parking areas, new street furniture, bins and bollards, as well as repaving the paths and roads using granite and some limestone. There will be a number of new raised platforms at the Parade, City Hall and James Street/Kieran’s Street.

There are a number of constraints to the works, including protruding basements of buildings and various underground services at a number of levels. In addition, ‘White light’ will be the new lighting scheme for the street, centrally suspended over the road.

The traders received assurances that work would take place outside regular business hours and peak tourism windows. For a period between April and May, however, the street will be closed to all traffic at night.

“Is there a reason that we can’t use more limestone?” asked Mr Costello.

“We have quarries here exporting to Brussels, so why are we importing granite when we are a city built on limestone?”

Mr Fitzgerald said it was impossible for health and safety reasons.

“You can’t use limestone in this way, it polishes too easily and it gets very slippery when wet,” he told the meeting.

“You won’t get anyone to stand over it from a design perspective either because of health and safety. It is a building material, not a paving material.”

The question was also asked why the ‘raised areas’ could not be continued the length of the street. It was revealed that this is an issue of finance, and to do the whole street would be prohibitively expensive.

Expanding on this topic, John Mulholland said the ‘shared space’ concept was likely some way off for Kilkenny.

“I don’t think we are quite ready for it just yet,” he said.

“The other thing to bear in mind is that in the summer of 2014, work will begin on the Central Access Scheme, and the traders will have an opportunity to look at this all again.”

A number of traders voiced their displeasure about the bollards set for pavements, but Mr Fitzgerald said they were necessary to prevent vehicles driving up on pavements.

“It might not seem like a problem for everyone, but people with a visual impairment or with buggies must be considered,” he said.

It was also proposed that a ‘project review group’ of around 10 people be established to engage in ongoing consultation.

“Individual trader requirements are to be accommodated as far as possible,” Mr Fitzgerald told the meeting.

Mayor Sean O’ hArgain, who chaired the first half of the meeting, said it was an important evening for the city.

“I have felt personally that High Street is cluttered, that it needs to be tidied up. It is 20 years since the last work was done and I think an upgrade is badly needed.”