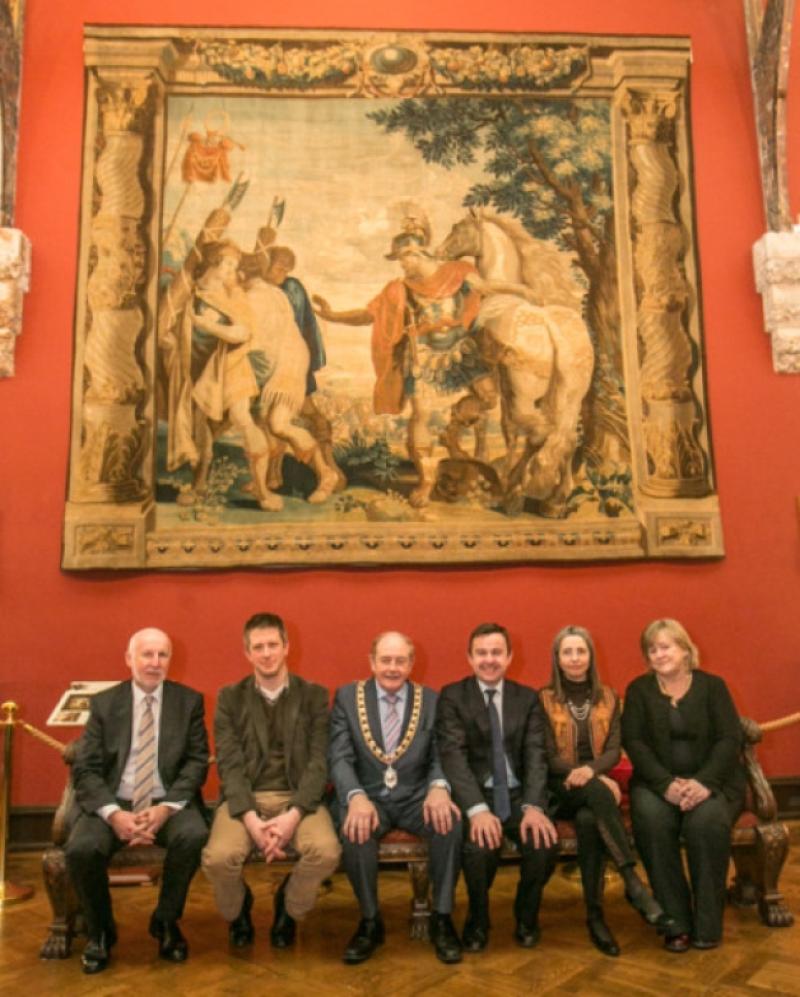 More than three years of painstaking preservation work paid off this week, as the ‘Decius Mus’ Tapestries were returned to their former home in Kilkenny Castle.

More than three years of painstaking preservation work paid off this week, as the ‘Decius Mus’ Tapestries were returned to their former home in Kilkenny Castle.

The elegant 17th Century tapestries now once again hang from the walls in the Tapestry Room and Picture Gallery. In recent times, they have been in Madrid, Spain undergoing intricate conservation work.

The works depict the legend of the Decius Mus – a Roman consul who sacrificed himself in battle to ensure victory for his armies. The tapestries are based on a painting by Sir Peter Paul Ruben.

The collection was historically owned by the Ormonde family for over 300 years, and was displayed in several of their residences before being acquired by Office of Public Works (OPW) for display in Kilkenny Castle. But time and wear took their toll on the delicate fabrics, and major conservation was needed.

This task was entrusted to one of the leading international conservation specialists in the art – Real Fabrica de Tapices in Madrid. The company has been in business over 300 years.

On Monday, a small gathering was held in Kilkenny Castle to mark the collection’s successful restoration and return. The event took place in the serene and wonderfully ornate Long Gallery, in stark contrast to the havoc wreaked on Castle Park five days previously. The park remains closed due to storm damage.

Isabel Fernandez, from Real Fabrica de Tapices, thanked the authorities and the OPW for their role in making it project possible.

“I feel very touched and very impressed to see these tapestries hang here,” she said.

“It was a very challenging task to put them back on display.”

Ms Fernandez also told the assembled crowd that much had been learned about the tapestries during the restoration process. She revealed that the were in fact woven in Holland, and were a copy of originals woven in Brussels.

Minister of State with responsibility for the OPW, Brian Hayes, attended the event. The junior minister said he was delighted to be in Kilkenny to launch the exhibition.

“The Castle is one of the gems of OPW’s historic building portfolio and the ‘Decius Mus’ Tapestries are a magnificent addition to this visitor attraction,” he said.

“Kilkenny Castle plays a very important role in the socio-economic fabric of this city and the success of Kilkenny as a tourism destination owes much to the development and operation of the Castle as a prime visitor attraction. I’m also pleased today to launch the summer programme for the Castle, which includes a range of events and festivals to suit all tastes.”