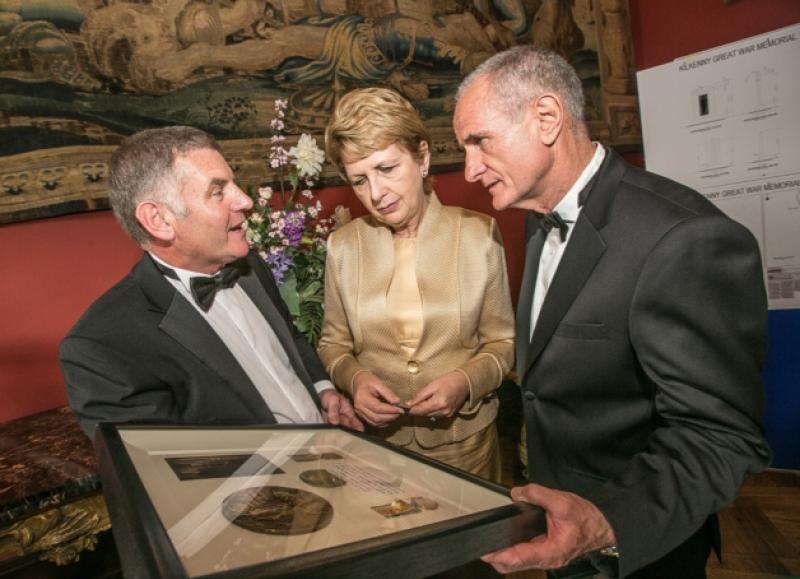 Plans for a World War I memorial in Kilkenny were officially unveiled alongside a unique event in Kilkenny Castle recently.

Plans for a World War I memorial in Kilkenny were officially unveiled alongside a unique event in Kilkenny Castle recently.

Former President of Ireland Mary McAleese and her husband Martin were the guests of honour at a special black tie dinner hosted by Paul Smithwick. Dignitaries were in attendance from Ireland and the UK including the Duke of Abercorn and members of the British House of Lords.

Ms McAleese was celebrating her birthday, and her presence certainly added an auspicious note to the occasion. She was the Head of State during the visit of Queen Elizabeth, and both famously laid wreaths together at the Irish War Memorial Gardens in Dublin.

It is also further significant that the Long Gallery – where the reception was held on Friday – was used as a medical ward during the Great War. Some readers may be familiar with the picture in John Kirwan’s book of the nurses outside the castle with Lady Ormonde and Lady Desart.

Almost 800 Kilkenny soldiers, sailors and airmen died fighting alongside the British forces in Europe from 1914 to 1918. Nearly 100 of them have no known graves, and many people are unaware of the role they played.

A group of locals formed the Kilkenny Great War Memorial Committee in 2011 with a plan to acknowledge and honour this important part of history, as well as build on the visitor experience to the Medieval Mile. While no location has yet been officially decided, it is proposed that the memorial wall will run along the boundary of St Mary’s Lane in the churchyard.

The committee is keen that it should not be a standalone monument, but an integral part of an ‘interpretative centre’ within the St Mary’s complex. This would see and additional ‘roll of honour’ and an interactive facility for family research. The memorial, made from local limestone, will feature the names of those who died and the location in the county where they were born. There are war dead from all parishes in Kilkenny City, as well as Castlecomer, Callan, Graignamanagh, Thomastown and others.

If funding can be secured, the group is hoping to have the memorial unveiled before or during 2016.

“The climate and timing is now right to address this omission in our shared history, and the memorial committee is determined to bring this project to fruition,” says Donal Croghan, chairman of the committee.

“The foundation of this committee is based on a mission to promote the commemoration of all Kilkenny mena and women killed in the Great War and to provide a permanent record to their memory and sacrifice by displaying their names on tablets of stone in Kilkenny City.”