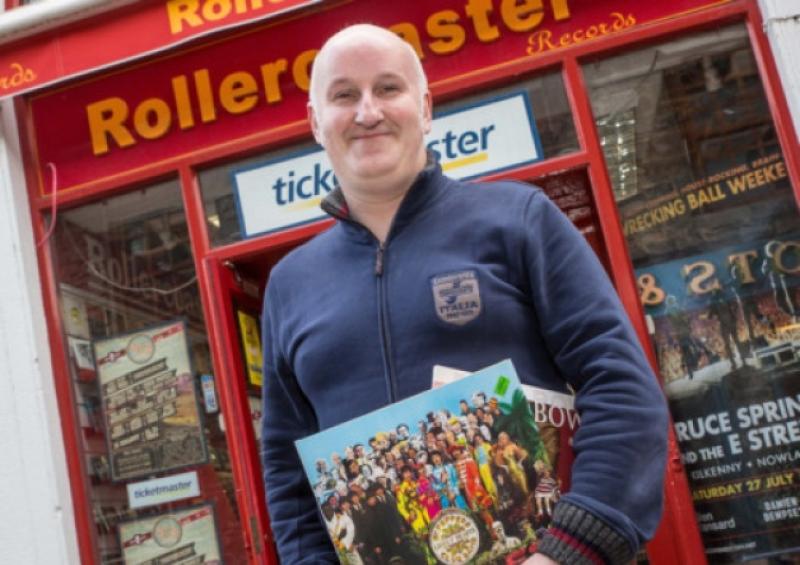 In the past 23 years, Kilkenny City has seen many music/record stores come and go – but Rollercoaster Records, in the heart of the city, has endured.

In the past 23 years, Kilkenny City has seen many music/record stores come and go – but Rollercoaster Records, in the heart of the city, has endured.

The little independent record shop on Kieran Street has seen the sun set on many dynasties. Heartbeat City, Irish Heartbeat, Zavvi and most recently, major chain HMV, have all either burned out or faded away in the last six years alone.

It’s another reason to celebrate this weekend – International Record Store Day, as it is known – observed on the third Saturday of April each year. The day brings together fans, artists, and thousands of independent record stores across the world.

To mark the occasion in Kilkenny, there will be DJs and bands playing all day long including Peter Bruntnell, Holy Roman Army, Neon Wolf and Kilo 1977. There will also be lots of freebies to give away.

That night, there will be a screening of Talking Heads – Stop Making Sense in the Set Theatre followed by the Rollercoaster DJs playing some alternative classics.

“This is an international celebration of independent record stores,” says co-owner Willie Meighan.

“There’ll be DJs, bands and loads of free stuff. It starts in the morning from 10am and will go on all day. Everyone is welcome.”

Rollercoaster was initally established as ‘Top Twenty’ when it first opened in 1990, owned by Richard Forde. But locals Willie Meighan and Darragh Butler bought the shop in 2004, and set sail in a new direction.

Willie says he has noticed a definite increase in footfall following HMV’s collapse earlier this year. But why has Rollercoaster survived where the industry giants have failed? At a glance, it is likely down to a few different reasons:

Strong, local support – a loyal regular customer base is sure to help. Then, there’s the Ticketmaster facility, which is boosted with the many festivals (think Bruce Springsteen this summer or Rhythm and Roots). There is also the good ol’ traditional record store feel to the place; it is a hub of a thriving social scene, and oftentimes it seems it would not be entirely out of place in an early Kevin Smith film.

“Over 20 years, it’s here a while... You’d get less time for murder,” says Willie, who has his own rationale to account for the outlet’s enduring popularity.

“I think it’s my good looks. I was recently referred to as ‘the thinking-woman’s Bressie’.”

And being independent offers certain advantages.

“You’re not beholding to certain record companies or people to stock certain things,” he says.

It’s sure to be jumping this Saturday as festivities kick off for the international celebration – officially founded in 2007 by record store employees. Apparently, the official ambassador this year is Jack White of the White Stripes.