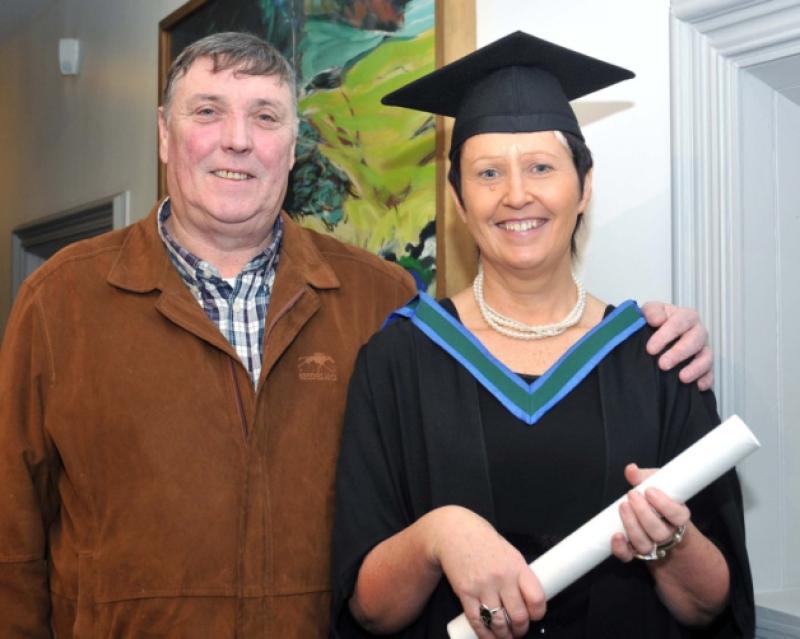 Maynooth University held their annual Conferring ceremony in Kilkenny Castle this week, awarding a number of diplomas as well as B.A. and M.Ed. degrees to graduates from all walks of life and from all over the South-East and beyond who had studied at the University’s Kilkenny Campus, located at St. Kieran’s College.

Maynooth University held their annual Conferring ceremony in Kilkenny Castle this week, awarding a number of diplomas as well as B.A. and M.Ed. degrees to graduates from all walks of life and from all over the South-East and beyond who had studied at the University’s Kilkenny Campus, located at St. Kieran’s College.

Graduates from the M.Ed. in Adult and Community Education programme included Liz O’Neill from Danesfort and Emma Sheppard-Butler from Callan, as well as those who had travelled from Dublin and around the country to undertake the part-time programme at the campus.

One of the graduates, Gráinne Murtagh from Portarlington, was also presented with the Paulo Freire prize, an award given each year to the student presenting the best Master’s thesis in the field of Adult and Community Education within the University.

Hilary Crosby-McNamara (Kilkenny) and Nessa Whelan (Castledermot) were conferred with the BA in Local Studies, while Fr. Roderick Whearty, curate in St. Patrick’s Parish, was conferred with a BA in Community Studies. Roderick also won a University Prize for his BA degree thesis.

Eleven graduates of the Design and Crafts Council of Ireland Ceramics course were also conferred to-day as part of the ongoing collaboration between Maynooth University and the DCCOI. The Ceramic Skills and Design training course is located at the beautiful Island Mill in Thomastown and is a two year intensive skills based programme. Now in its twenty-first year, this course has established an excellent reputation in the industry both nationally and internationally.

At the Conferring ceremony, Prof. Philip Nolan, President of Maynooth University, congratulated all the graduates and the families and friends who had supported them during their studies.

The President also welcomed recent developments at the campus, noting in particular the successful transition of the first cohort of full-time First Arts students from Kilkenny Campus to complete their second and third year at the main campus in Maynooth, and the recruitment of a larger cohort for the programme this year.

He pointed out that this initiative had been primarily intended to target students from Kilkenny and the surrounding hinterland, for whom the opportunity to take their first year locally while still living at home would represent a significant financial saving at a time when students and their families are under increased pressure to finance their education.

However, what had become noticeable from both the first cohort in 2013 and the second intake this year is that there are also a significant number of applicants from further afield choosing to apply for MH901 (the CAO code for this programme) because the idea of the smaller campus and student cohort is very attractive, and is seen as an easier and less nerve-wracking transition to third-level.